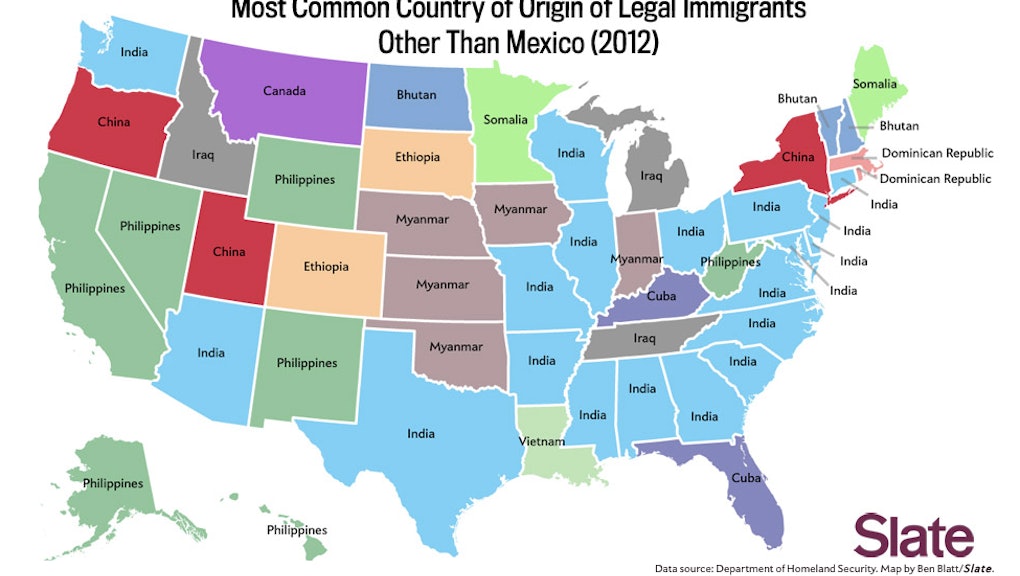 One Map Shows Where the Majority of Immigrants Come From in Your State, Besides Mexico

The news: Cubans in Kentucky. Bhutanese in North Dakota. In Michigan, Idaho and Tennessee: Iraqis.

When Mexico is no longer a factor in the immigration equation, the biggest documented populations in each state might be far from what you'd expect. A little more than 1 million people were granted legal permanent residency (LPR) status in the U.S. in 2012. The No. 1 country of origin for these immigrants was Mexico, with around 150,000 Mexicans legally becoming permanent residents.

But which nation is most represented in each state after Mexico? Slate's Ben Blatt created a map of what the next most prevalent origin country per state is. By compiling data from the U.S. Department of Homeland Security, the map illustrates a patchwork of immigrant communities that could change the way you look at your state

There's a caveat. The number of immigrants per individual state varies widely. For example, in Wyoming, Filipino immigration was at the top in 2012. But consider the fact that the state only granted legal residency to 427 people total. California, on the other hand, allowed in 196,000 new foreign residents.

By taking into account the total population of each state and the number of LPR statuses granted, the numbers tell a very different story.

Deciphering the trends. There are some interesting points in Blatt's map, including an abundance of Indians in the South. In 2012, 66,000 Indian-born immigrants were granted green cards, which accounts for 6% of the total number of LPRs granted in that year. And out of the entire Indian immigrant population, one-quarter live in just three metropolitan areas: Chicago, San Jose, Calif., and New York.

So why are large numbers of Indians settling in places like Texas, Georgia, Alabama and Mississippi? Many Indians arrive to the U.S. through an employment-based channel, and the fact that 70% of all Indian immigrants have strong English-language skills may factor into some of the immigration patterns. Southern states may be the ones employing them.

By 2012, almost 41 million immigrants resided in the U.S., a record high. With an ever-increasing number of immigrants being granted permanent legal residency, the distribution of origin countries will undoubtedly change in fascinating ways over the coming years.