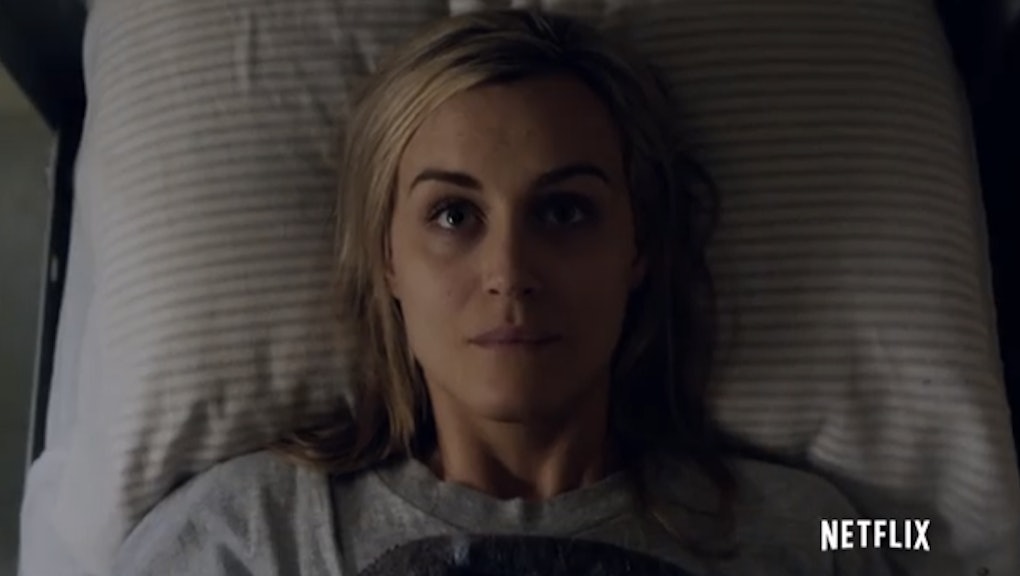 While Writing for 'Orange Is the New Black,' I Realized I Am Gay

I was underdressed the day we shot Larry's pivotal phone call with Piper for the first season of Orange is the New Black. It was 9 degrees on Fifth Avenue, and I wore New Balances and a pair of wool socks — but I sucked it up because this was the climax of their season-long arc: A scene where both characters are finally forced to be honest after months of lying to each other. It was a scene I'd written with words shamelessly borrowed from my own life, and as I watched Jason Biggs repeat "I don't know if you can," after Piper begs him to let her fix her mistakes, the world around me swirled in a dizzying blur of life imitating art. Or vice versa — it's hard to say sometimes. By the end of the day I mostly was trying not to cry, and I also couldn't feel my feet.

In any story worth telling, there's conflict. And so, while it certainly would have been disorienting to begin to question my sexuality after three decades of knowing myself, it was particularly blinding because I'd gotten married only a few months before. It was the sort of wedding that makes you believe in absolute partnership and the strength that can come from facing obstacles, like the life-threatening illness that my new husband had battled for the majority of our relationship. But he was healthy again, so we danced under strings of Christmas lights and drank fancy cocktails that were served in mason jars, all while being surrounded by the friends and family who had held us up over the previous six years.

Which is why it's now a punch in the gut every time I have to say, "I'm getting divorced because I'm gay." It's a sentence I've said approximately 5,223 times in the last six months. For those of you keeping track, I'm definitely not exaggerating and I'm not prone to hyperbole, ever.

Often, after I make the declaration in as casual a voice as I can manage, the next question is, "Did you know?" It's a question that I dread because I always hear the implied "How could you not know?"

The thing is, even when you find yourself in a minority, there's always a majority. If I was really gay, I would have known when I was younger. There was a prescribed narrative, and everything about my own story challenged the accepted one.

Five months after my wedding, I flew to New York to start production on my first episode of Orange, and from that moment on my life fell into a parallel rhythm with Piper's story in a way that went from interesting to terrifying in a matter of months.

"You're so gay!" people exclaimed gleefully and often in the writers’ room those first few months. It was my first professional writing job, and I quickly discovered that the writers' room was a remarkably intimate place: We shared details of fights with our significant others or childhood family secrets that might be cloaked in shame otherwise, and at the end of the day, all of it could be distilled into material that made the show richer.

As we started to shape our characters and debate fictional Piper's "true" sexuality that first season, we engaged in long discussions about sex, gender and our own experiences. I eagerly shared details of innocent, "above-the-waist" flirtations with girls when I'd been younger. I'd even excitedly blurted out, "I would totally sleep with her," about an actress who had auditioned for Alex (now played brilliantly by Laura Prepon, who shares the role with a pair of glasses). I went to therapy that night and casually mentioned that perhaps I was higher on the Kinsey Scale than I previously thought.

The sound stage for Orange, where we proudly employ what has to be at least 64% of lesbians in the New York City metro area, is not a place where you can shy away from women or sexuality. And if you're trying to, Lea Delaria (Big Boo) will nip it in the bud by inviting you to sit on her lap.

Accordingly, I was nervous about the first love scene I'd written for Alex and Piper. I'd loved writing it, loved watching a tenderness emerge in their relationship where passion always seemed to be the ruling principle, but by that time, I was so deep in my own self-doubt that I constantly felt like a fraud. I was sure it was bleeding into my writing. How could it not? I was married to a man, but I wasn't straight.

As I watched Taylor Schilling and Laura film the scene, one of our producers (as it happened, a gay woman) tapped me on the shoulder. She pointed at the screen and gave me a thumb's up. It was a small gesture, but my first step toward feeling accepted and quietly accepting myself. In Piper and Alex, I'd found a mouthpiece for my own desires and a glimmer of what my future could look like.

Outside of small victories on the show, I continued to spiral downward. I felt like my life was being rewritten without my permission. I'd checked all my boxes! I was happily married and loved my job!

I realized I was gay in fall 2012, one of my first days on the set. It wasn't so much one thing, but the sum of many small details: how uncomfortable I felt around groups of lesbians or how I considered myself (shrug) a "not very sexual person." When considered alone, these seemed like little quirks that made me me. Wanting to read a book instead of have sex is a perfectly reasonable preference to have, right?

But on set, these small moments came into sharp relief, and I found myself answering to an endless stream of cast members who peppered me with questions like a gaggle of kindergartners curious about their new teacher. "Are you dating anyone?" "You're married?" "To a man?" "But you used to kiss girls?" "Do you miss it?"

I was finally forced to consider a question that had never, ever occurred to me before: Holy shit, am I gay?

Despite being 31 years old, having lived in extremely liberal cities for 13 years of my life and considering myself an educated individual, over the last year I:

1. Googled "How do you know if you're a lesbian?" There had to be, like, a quiz or something, right?

It feels important to say these things in a public way, to record them where they are easily accessible because if I could think and feel them while working in the world's most supportive environment, surrounded by people in the LGBT community, where being a minority of any sort is joyfully celebrated, I can only venture to imagine the pain, confusion and fear that might have existed otherwise.

I attended the GLAAD awards recently, where I had the privilege of witnessing Ellen Page present Laverne Cox with the Stephen F. Kolzak Award. GLAAD's president, Sarah Kate Ellis, also spoke that evening, and encouraged the room to live their lives openly and with love, in full view of any opposition that might exist.

After lugging around a basket full of shame and guilt for the last year, there was a lightness that came with realizing that I could choose to replace my negative framing with honesty and grace.

I am now out to my family, my friends and most of my co-workers on Orange (and now to you, dear reader). Now, when I am in the writers' room or on set, I no longer feel like I am stuck in the middle of two truths. I belong because my own narrative fits in alongside the fictional stories that we are telling on the show: stories of people finding themselves, of difficult paths and of redemption.

I won't spoil anything for you, but I am tremendously proud of my own contributions to season 2 of Orange is the New Black. It was in the writers' room that I came into myself, surrounded by unconditional love and teasing when I needed it (like when I was so depressed that I wore a hoodie and a baseball cap for too many days in a row and someone asked me if I was trying to be an undercover cop).

I went through it all on set: I fell in love with a woman, and I watched my life play out on screen. And now, as we are gearing up for the release of season 2, it feels liberating and appropriate to live my life in front of you.

I am not perfect. I would rather be comfortable than brave. I also wouldn’t mind your approval because that always feels nice.

And yet. This is my story, which is messy and nuanced and a constantly moving target, but one I'm grateful for. I encourage you to embrace your own narrative, whatever that may be. It will be worth the effort. I promise.