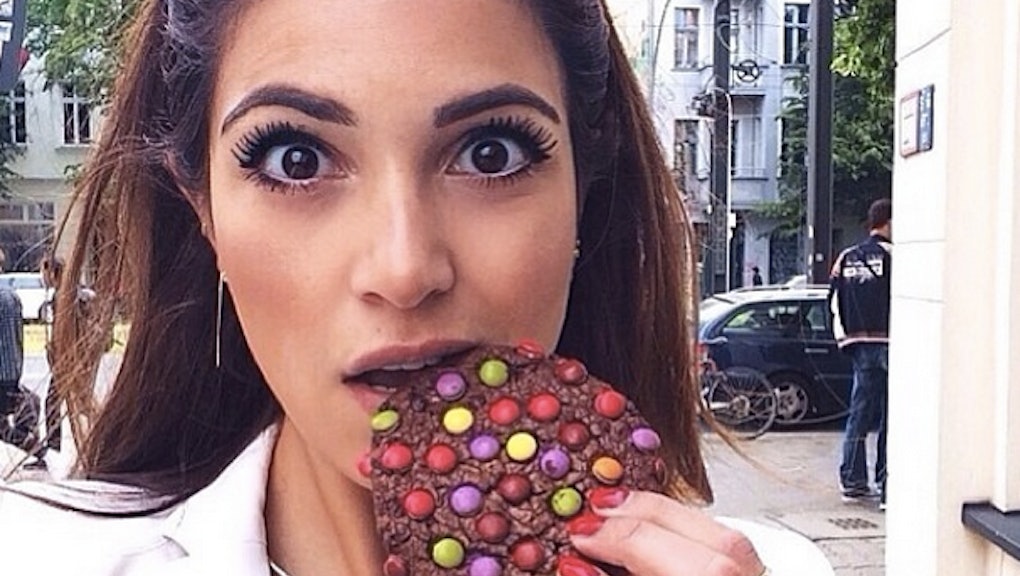 Have you ever taken a selfie in which you pretend you're about to bite into a perfect, pink-frosted doughnut only to abruptly toss it into the trash after the photo and go back to eating your boring salad?

Me neither. But this trend of using food as an accessory is apparently a scourge of the fashion blogging industry, and you did not eat that (henceforth YDNET) is out to stop the madness. The recently founded Instagram account reposts images of svelte women posing alongside calorie-laden foods that, given their physiques, they ostensibly didn't eat.

Although YDNET's snappy captions teeter on the mean-spirited, a recent, fawning interview with New York magazine's The Cut insists the account simply acts as a "good-natured whistleblower on all those taking photos as though they haven't denied themselves refined sugar for the last decade." And with nearly 60,000 followers, YDNET has clearly tapped into some latent frustration surrounding (skinny) women's projected eating habits.

Before mocking these women, however, it's important to remember that many, many factors influence how and what we eat, especially in front of other people. Women face a catch-22 when it comes to eating in public: We must be thin, yet relaxed around food. We need to fit a narrow ideal of beauty, but cannot show the work it takes to get there; guys want the carefree girl who's not afraid to order the burger at dinner, not the uptight one who gets a salad. Friends, too, shame each other with taunts of "you're no fun" if you forgo dessert or ask for dressing on the side.

So while it may be true that style bloggers and magazines are incorporating a questionable amount of ornamental food into their photoshoots, this exercise in public humiliation isn't something to be celebrated. Good-natured or not, YDNET feels a lot like another attempt to police women's behavior instead of questioning why women would pose alongside food they don't eat (or do eat) in the first place.

Comfort with comfort food is part of being a ultra-desirable "cool girl," an archetype that author Gillian Flynn describes as someone who "jams hot dogs and hamburgers into her mouth like she's hosting the world's biggest culinary gang bang while somehow maintaining a size 2." Top Chef host Padma Lakshmi bluntly calls the obsession with women's liberated eating habits "a male fantasy," telling the New York Times, "Look, the two things we need to survive in life are food and sex or love. ... So what is better than the archetypical image of a woman eating succulent, dripping, greasy, comforting food?"

This isn't solely about male desire, either. Therapist Rachel Morris told the Daily Mail, "Women can be critical of friends' food choices. ... [I]f you're slim, other women often feel judged if you refuse food — as if you're highlighting their own lack of control." This can lead to "liarexia," or the practice of consuming large portions in public while dramatically restricting food intake in private. And from tabloids to high-brow women's magazines, the obsessive noting of female celebrities' "Documented Instance of Public Eating" (or DIPE) is nothing new. Thin women in the spotlight often have to prove how much they eat, because, as journalist Julia Burke points out, despite having the highest mortality rate of any mental illness, an eating disorder "is not a diagnosis anymore — it's an accusation."

It's also worth noting that YDNET fits squarely into the media's recent fascination with food-shaming. In April, comedian Amy Schumer's sketch show featured a segment called "I'm So Bad," in which a group of female friends swap stories about their dietary transgressions while glossing over the legitimately horrible things they've done. ("I was cyberbullying my niece on Instagram the other day an I literally ate 15 mini muffins!") It's a funny clip, but it's also shines a much-needed spotlight on the absurdity of equating food with morality:

In a decidedly less amusing incident, a London man recently was met with deserved outrage for taking creepshots of women eating on subway cars and posting them to Facebook — a practice that left at least one woman feeling "hurt and humiliated." And then there's the series of hyper-realistic self-portraits by Lee Price featuring the artist eating common trigger foods in unusual, personal spaces, like the bathtub, or in bed.

Our relationship to food clearly can be complicated at times, and while it would be great if people never felt obligated to lie about what they eat, YDNET isn't the solution to this problem. There certainly are women who don't ingest every single goody they post pictures of, but no one is pretending it's possible for the average person to scarf huge quantities of junk while maintaining a six-inch thigh gap. It should go without saying that women, even skinny women, can — and do — indulge.

YDNET might not be trying to make a broad social statement, but judging a person's diet based only on her body type is both misguided and hugely insulting. Think of it this way: What if instead of thin, traditionally attractive women pictured alongside cookies and bagels, YDNET featured overweight women posing alongside salads and yogurt? Would people feel as comfortable writing snarky comments about how such a meal was all an act for the camera? Of course not.

Most importantly, when nearly two-thirds of women and girls suffer from disordered eating (and thousands of women say that they lie about what they eat in public), the more you call out individuals, the more likely the critique will eventually target someone who doesn't have a healthy relationship to food. So rather than telling women to stop pretending they ate something, maybe we should stop telling them what to do.