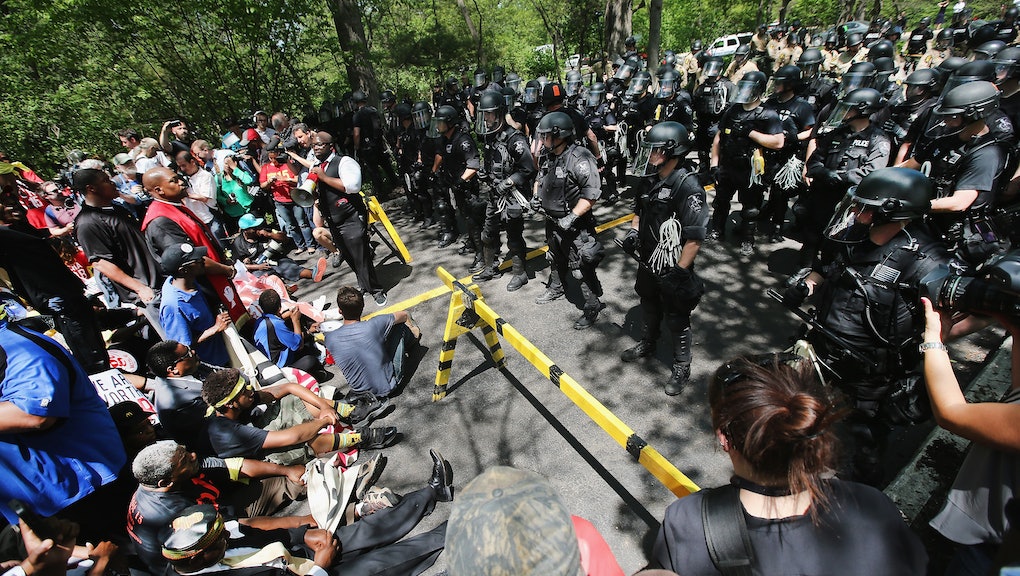 Here's What Happened to McDonald's Employees Protesting for a Higher Wage

The news: After a high-profile international protest — the biggest fast food strike in history — disgruntled McDonald's employees decided to continue their campaign outside the company headquarters in Oak Brook, Ill., leading to more than 100 arrests and a tussle with the police.

Wednesday's protest was held a day before the company's annual shareholder meeting, where it's expected executive pay will be discussed. Around 2,000 McDonald's workers and other minimum wage activists stormed the Hamburger University campus to call for $15 hourly wages and the right to unionize, leading to what is reported to be the largest demonstration against the world's biggest fast food company.

"We cannot survive on poverty wages. We need our wages to be increased and we need a union to have protection in the workplace and take care of our families," 25-year-old McDonald's employee Jessica Davis, who makes $8.98 an hour, told TIME. "McDonald's is my only job. It's really hard taking care of two children and paying the bills."

Do the protesters have a point? While most fast food workers are paid more than the minimum wage, many believe that they still do not make a livable income. According to the Bureau of Labor Statistics, the average fast food employee in America makes about $9.08 an hour, or $18,880 a year.

But McDonald's argues that there is not much it can do to change worker conditions, since "80% of its restaurants are independently-owned and operated by small business owners." Wages are often set by local market conditions, and McDonald's execs have stated that they will follow Washington's lead.

"When it comes to the minimum wage, that's a national discussion," said a spokeswoman for the company. "It's not a McDonald's issue, it's an economic issue. We'll look to the folks in Washington to determine what happens."

Why this is important: The executives' arguments, however they might be interpreted, are falling on deaf ears with the protesters, who believe that they are being exploited to line corporate execs' pockets. (McDonald's CEO Don Thompson reportedly took home $9.5 million in compensation last year.) They made their displeasure clear on Wednesday, chanting outside the company's headquarters, "Hey McDonald's, you can't hide. We can see your greedy side," and "No Big Macs, no fries, make our wage Supersize."

And the protesters may be right in one regard: It might be faster and more effective for McDonald's to come up with a pay floor solution than for Congress get out of its legislative quagmire.

Individual cities and states are increasingly using this approach. Earlier this month, Hawaii joined Connecticut and Maryland to become the third state this year to raise its minimum wage to $10.10 per hour — the amount prescribed by congressional Democrats. Already 34 other states have introduced similar legislation for higher pay.

If McDonald's is serious about addressing its workers' concerns, it should consider reaching out to the independent franchise owners to come to an arrangement; that's more likely to work out than some magical congressional solution.