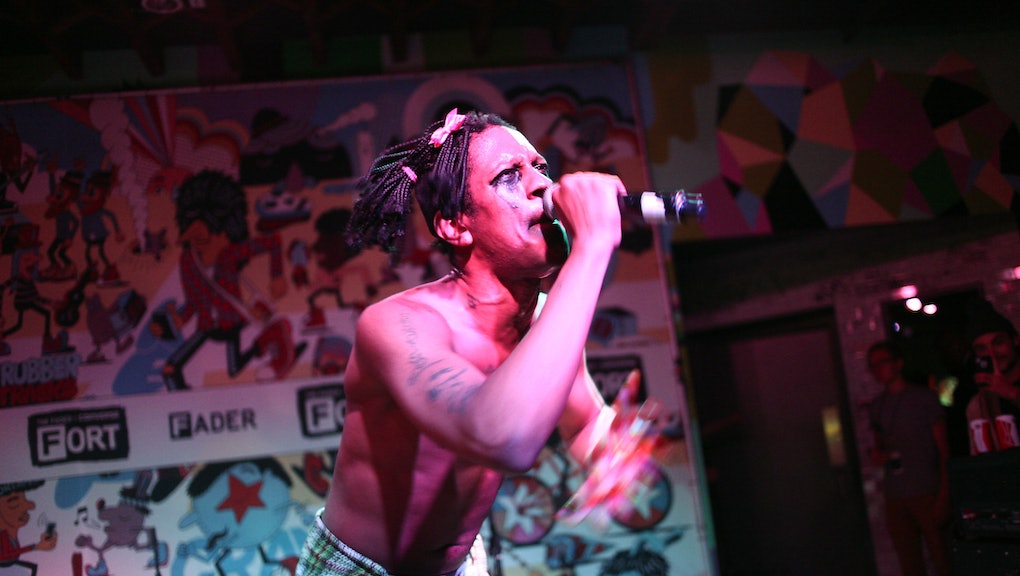 This Gay Rapper's Arrest Has an Important Lesson for America

Mykki Blanco, a queer Brooklyn-based rapper, was arrested in Portugal earlier this week for no reason. She says it's because she is gay.

Blanco, the female rap persona of multi-gendered Michael David Quattlebaum Jr., explained the incident on Facebook. She had just arrived in Portugal on tour and was trying to get a taxi at the airport but was having difficulty figuring out the taxi voucher system. When she asked a policeman for help, he ignored her to begin "eagerly" helping other (white and straight) people in line. She demanded to know why she wasn't being helped, to which the police officer told her to "Go away, bicha (the Portuguese equivalent of faggot)." She said "fuck off" in response — and was immediately arrested for, supposedly, insulting a police officer. It was like a scene out of one of Blanco's twisted music videos, many of which unflinchingly take on homophobia.

The incident has global significance because it reveals a dark truth about homophobia. Portugal is one of the only countries in Europe explicitly to forbid discrimination on the basis of sexual orientation. In 2010, the country’s president, Anibal Cavaco Silva, "reluctantly" ratified a law to allow same-sex couples to marry (though couples are still not allowed to adopt). On paper, Portugal is progressive. Yet still homophobia runs rampant.

Portugal's treatment of Blanco is a warning for America. They've legally achieved what we, as a nation, have only dreamed of, but their culture remains discriminatory. Surveys have found that the percentage of the Portuguese public that accepts gay marriage and gay adoption falls well below the EU average. In another survey, 28.6% of LGBTQ said they had experienced prejudice from a colleagues at work. Many even said they were not open about their sexual orientation in the office. Homosexuals also face discrimination in the Portuguese health system — many gynecologists assume women are engaged in heterosexual relationships, while gay men are automatically "associated" with HIV/AIDS. A lot of the country's media exhibits bias, too. There have been a number of highly publicized cases of violence, beatings and lynchings.

Since posting the story on Facebook, Blanco has been met with threats of lynching, too. It's a bold reminder to America that law isn't everything. If we're actually going to have an equal society, we need people like Blanco going to war with the kind of homophobia that can't be legislated against. We need to change our assumptions, not just our laws, and that's what people like Blanco do. As he raps on popular song "Wavvy," "'Oh this fag can rap' yeah they saying that they listening."

Correction May 23, 2014 — The original article said Blanco was called 'bica.' The slur used was actually 'bicha.'