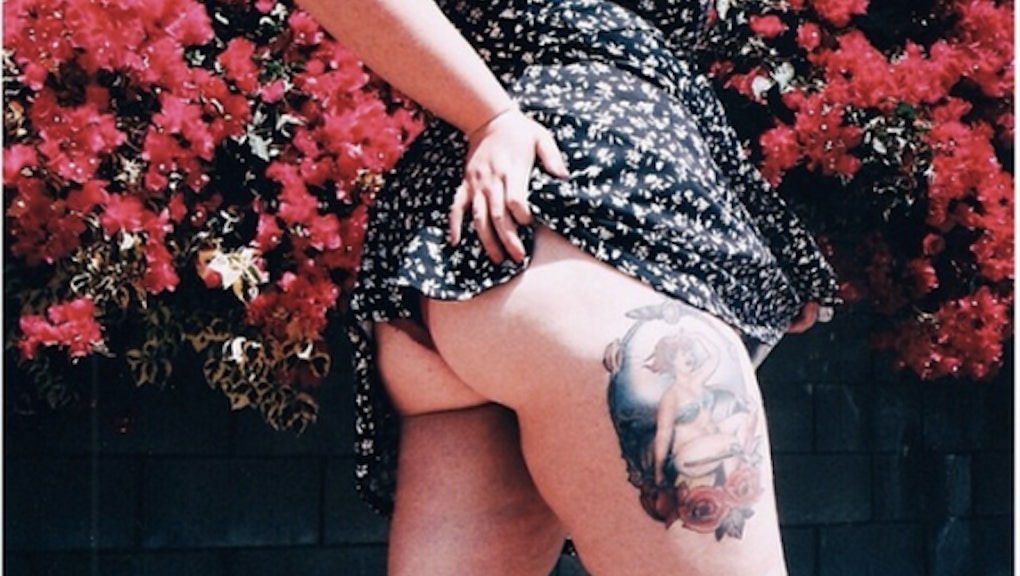 In an impressive corporate fail, the photo-sharing platform censored a photo because they deemed it as "mature content," despite the fact that the behind was covered by underwear and similar to countless thin women who have never been banned. Although Instagram has since issued an apology and put the photo back up, this shines light on a well-documented problem in our society: our consistent discomfort with plus-size bodies.

According to Meghan Tonjes, the musician and YouTube vlogger whose photo was censored, the post was flagged as inappropriate and removed, probably without any actual human taking a look at it to verify if the she had, in fact, violated standards.

Although we'll never know if Tonjes' picture got more flags, than say, Rihanna's almost nude Prada shot (which is highly unlikely), the incident raises some important questions. What is it about non-Photoshopped and curvier bodies that make us so uncomfortable? Why was the image reported in the first place?

In a statement, Instagram told PolicyMic: "We try hard to find a good balance between allowing people to express themselves creatively and keeping Instagram a fun and safe place. Our guidelines put limitations on nudity and mature content, but we recognize that we don’t always get it right. In this case, we made a mistake and have since restored the content."

Tonjes thinks it's because "We don't live in a culture that values bodies 'as-is.'" That's why overweight people get push-back for having confidence.

"We aren't fighting every day to be perfect, and when we see someone else who is comfortable with themselves and content, we don't know how to deal with it," Tonjes told PolicyMic.

We aren't just uncomfortable with confident plus-size people, we're uncomfortable with them period. Our society discriminates against and makes assumptions about people who are not thin. Studies show that we are more likely to label them as lazy, sloppy, less competent and we're even less likely to vote for them if they run for office.

But that discrimination is worse for women. We judge larger female bodies more harshly because we view them as more transgressive than males. It's one of the consequences of living in a society that is obssessed with women's looks.

A plethora of depressing studies evidence this troubling trend. In a work environment, when subjects are given descriptions about workers, men are much less likely to want to work with female workers while that trend is not visible for overweight men. The wage penalty that's associated with being overweight — yes, this is actually a thing — is twice as significant for women as it is for men. It's no surprise that so many women have eating disorders when there's actually a financial penalty to being overweight.

Even health care professionals exhibit bias against larger women. According to research, doctors are more likely to assign weight-loss diets to female bodies, even when male bodies have the same BMI. While weight discrimination is an issue that's felt by both men and women, females report starting to feel judged when their BMI is 27, while men have to be around 35 to sense public scrutiny. This prejudice is tangible in the dating world too, where men are more likely to respond to an ad that featuring a woman who used to be addicted to drugs than a woman who is 50 pounds overweight.

In a world still ridden with patriarchal conceptions of women, overweight females present a threat to the idea that the female body exists purely for male pleasure. Tonjes believes that these misconceptions shouldn't stand in the way of personal expression and self-love.

"The most upsetting thing to me is that there are people who feel like they shouldn't be visible because they don't deserve to be," she said. Everyone deserves a full life free from abuse and discrimination, regardless of their shape or gender.

Despite this ordeal, Tonjes is hopeful.

"I don't know that there's a way to completely stop any kind of body policing or shaming," she said. "I just hope that we can educate the people who are cruel and demeaning towards other body types while building up and supporting those who are mistreated.

"I hope Instagram was sincere in their apology and didn't replace my photo to avoid backlash but as a first step to really looking at some of the flaws in their reporting system. I'm hoping that it won't take a flood of media and inquiries for future people dealing with the same thing to get results."

Tonjes has not let this incident slow her down. Since her photo was removed, she's been actively adding images of her fabulous frame and speaking about the issue on her YouTube channel. Judging by the amount of users who have openly showed their support for the vlogger, Instagram will be more meticulous the next time they want to censor women's behinds.