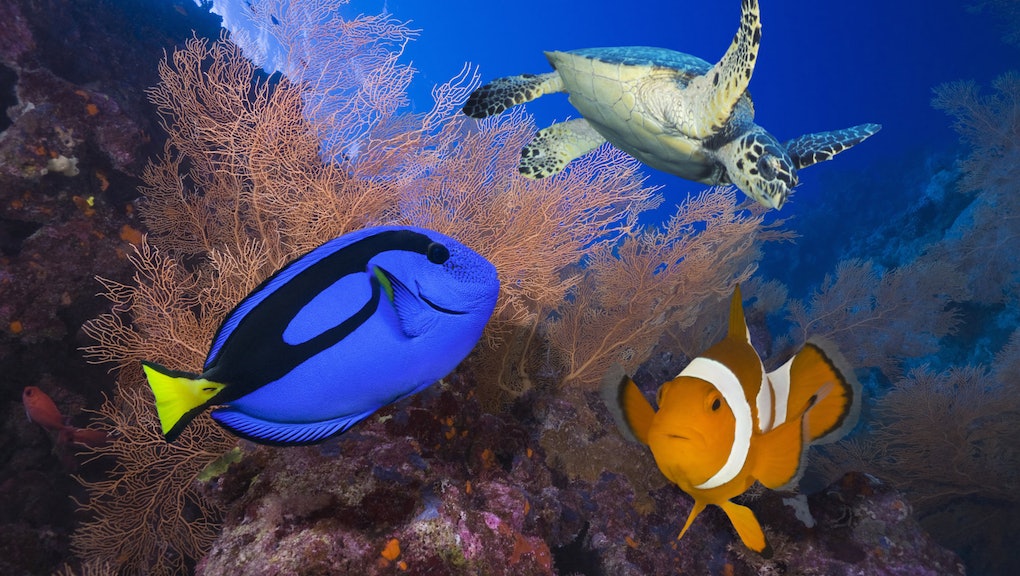 One of Earth's Seven Wonders Is Vanishing Before Our Eyes

The news: Australia's Great Barrier Reef is one of the planet's greatest natural treasures. Named one of the "seven natural wonders of the world," this World Heritage site is the biggest single structure made by living organisms, consisting of more than 3,000 individual reef systems and coral cays.

And now, the home to thousands of marine species — including the beloved characters of Finding Nemo — is in danger of vanishing before our eyes.

A new report by the Australian Marine Conservation Society shows that the reef is under "unprecedented" threat from Australia's urban development and proposed expansion in coastal ports. The report estimates that allowing large ships to access these ports would involve dredging 149 million tons of seabed, leading to serious damage to the reef systems and the marine life that depend on them.

But Australia's development plans are only the latest in a long line of threats against this jewel of ecodiversity. The Great Barrier Reef has been dying for a while now, as years of rising temperatures, pollution, carbon emissions, tropical storms and sediment dumps have taken their toll. And the future looks even bleaker from here on out.

How bad is it? An alarming 2012 report revealed that the Great Barrier Reef has lost more than half of its coral cover since 1985, and the pace of deterioration is only expected to increase in the future.

In March, a University of Queensland report warned that without immediate action, damage to the famous reef system would be "irreversible" by 2030. "If we don't increase our commitment to solve the burgeoning stress from local and global sources, the reef will disappear," argues the report. "This is not a hunch or alarmist rhetoric by green activists. It is the conclusion of the world's most qualified coral reef experts."

The Queensland report also found that "unless temperatures are kept below the internationally agreed limit of 2C warming on pre-industrial levels, the reef will cease to be a coral-dominated ecosystem," bringing an end to a reef system that has flourished for the past 20,000 years.

Why is this happening? Industrialization and human activity are obvious culprits here. The dredging and dumping of seabed is just one facet of the problem; environmental activists also point to overfishing, pollution, oil spills, shipping accidents, tourism and excessive coal mining as other factors in the destruction of the Great Barrier Reef.

Image Credit: Fight for the Reef

Another is the explosion of coral-eating starfish, and even that can be traced back to pollution. While the population of crown-of-thorns starfish spikes cyclically, it's been happening more frequently due to agricultural runoff in the water. These population booms used to take place every every 50 to 80 years; now, nutrient runoff is leading to booms every 15 years.

Horseshoe Reef before and after crown-of-thorns invasion:

But the elephant in the room is global warming. The 2012 report found that storm damage accounted for 48% of reef decline, while coral-eating starfish contributed 42% and coral bleaching contributed 10% — and these causes can be linked back to climate change.

For one, coral bleaching is a reaction to rising water temperatures. Warmer waters kill off the algae that give the corals their vibrant color; without this food source, the corals begin dying off as well, leading to a ripple effect in the food chain. The rising frequency and severity of cyclones, along with other extreme weather events, have been linked to climate change as well.

MacDonald Reef before and after cyclone damage:

Carbon emissions and the resulting ocean acidification are also a huge threat. According to the Guardian, "The increase in carbon dioxide pumped into the atmosphere, 90% of which is absorbed by the oceans, has already caused a 30% rise in the hydrogen ions that cause ocean acidification. This process hinders the ability of corals to produce the skeletal building blocks of reefs."

What can be done? Environmental organizations the World Wildlife Fund and the Australian Marine Conservation Society have teamed up for the "Fight for the Reef" campaign to prevent irresponsible development and industrial dumping. Other activist groups are also putting pressure on the Australian government to scale down industrial activity and step up conservation efforts.

While much damage has already been done to the Great Barrier Reef, we are not yet at the point of no return; we still have 16 years to go before we meet Queensland's "irreversible" deadline. If politicians prioritize environmental conservation over immediate profits, this natural wonder can still be salvaged.