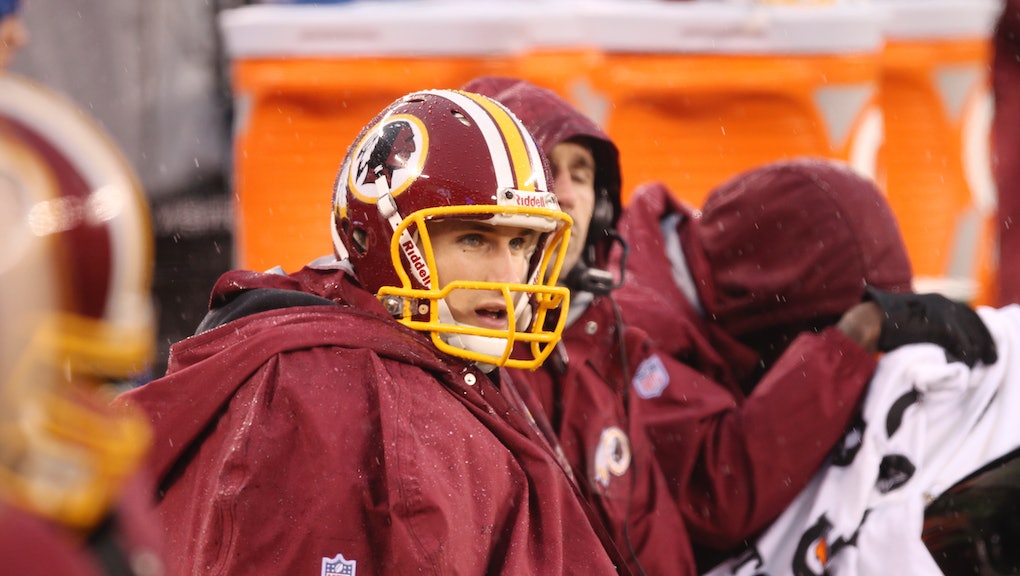 The news: The Donald Sterling scandal has shined a new spotlight on racism in sports, and one of the most-frequently brought up issues is the ongoing hoopla concerning the Washington Redskins. Despite frequent calls to amend the team's offensive name, NFL Commissioner Roger Goodell has refused to visit the issue. The controversy has attracted the attention of athletes and sports commentators, but now Goodell has a new group of people to answer to: Congress.

On Wednesday, 50 U.S. senators — 48 Democrats with two independents — sent an open letter to Goodell to voice their concern over the Redskins' name. Noting that the Sterling scandal has "opened up a national discussion about race relations," the senators argued that now was the opportunity to "take action to remove the racial slur from the name of one of [NFL's] marquee franchises."

"Today, we urge you and the National Football League to send the same clear message as the NBA did: that racism and bigotry have no place in professional sports. It's time for the NFL to endorse a name change for the Washington, DC. football team," they wrote.

The move was supported by Senate Majority Leader Harry Reid (D-Nev.). "I have 22 tribal organizations in Nevada. They are not mascots. They are human beings. And this term Redskins is offensive to them," he said. Only five Democrats — Mark Warner and Tim Kaine of Virginia, Joe Manchin of West Virginia, Joe Donnelly of Indiana and Mark Pryor of Arkansas — declined to sign.

A bipartisan issue? The letter was only circulated among the Senate's Democrats and independents, but there is evidence of similar sentiment on the other side of the aisle, at least among some people. Earlier this month, Sen. John McCain (R-Ariz.) admitted that he would "probably change the name" if he were Redskins owner Daniel Snyder.

And this isn't the first time that politicians on the Hill have raised concern over this issue. Back in February, Sen. Maria Cantwell (D-Wash.) and Rep. Tom Cole (R-Okla.) — who is an enrolled member of the Chickasaw tribe — sent a similar letter to Goodell, which was roundly ignored.

"With all the important issues Congress has to deal with, such as a war in Afghanistan to deficits to health care, don't they have more important issues to worry about than a football team's name?" Redskins spokesman Tony Wyllie responded at the time.

Even President Barack Obama addressed the issue last year, cautiously siding with a name change. "I don't know whether our attachment to a particular name should override the real, legitimate concerns that people have about these things," he told the Associated Press.

Is this likely to happen? According to public opinion, no. A 2013 Washington Post poll found that two-thirds of Washingtonians would prefer that the Redskins keep their name; half the respondents said they were strongly against the name change.

Interestingly enough, 56% of those who did not want the name change said they consider the word "Redskin" to be inappropriate, while 82% of all respondents said their team loyalty would not be affected by the name change.

So while most people are not proactively clamoring for the Redskins to drop the moniker, Goodell and Snyder won't have to worry much about diehard fans rioting against the name change either.

And that brings us to the main point: despite what politicians and fans might feel, the ultimate decision lies in Goodell and Snyder's hands. Letters like this can generate publicity and increase pressure on the NFL, but unless they start seeing financial costs or serious reputational damage from the fallout, Goodell and Snyder are unlikely to ditch the name that's defined the team for the past 82 years.