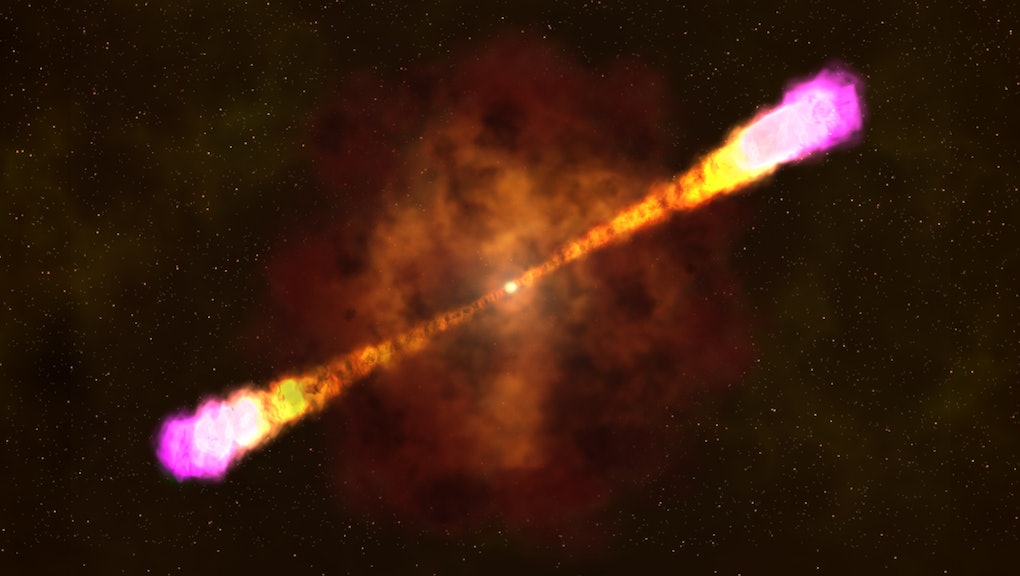 Scientists Have Discovered How to Create Matter From Thin Air

The news: This is a big one. Physicists at Imperial College London have discovered how to make matter from pure light, and they intend to demonstrate the results within the next year.

Using high-powered lasers and other tools, the researchers have cracked a problem unsolved for 80 years. In 1934, American physicists Gregory Breit and John Wheeler (who later helped create the atomic bomb) theorized that, very rarely, photons could collide to produce an electron and a positron, a form of antimatter. They concluded that the reaction was so unique and impossible to recreate given current technology that it was "hopeless to try to observe the pair formation in laboratory experiments."

But the Imperial College London team has solved the problem. "We have shown in principle how you can make matter from light," said researcher Steven Rose. "If you do this experiment, you will be taking light and turning it into matter."

"Writing in the journal Nature Photonics, the scientists describe how they could turn light into matter through a number of separate steps. The first step fires electrons at a slab of gold to produce a beam of high-energy photons. Next, they fire a high-energy laser into a tiny gold capsule called a hohlraum, from the German for "empty room". This produces light as bright as that emitted from stars. In the final stage, they send the first beam of photons into the hohlraum where the two streams of photons collide.The scientists' calculations show that the setup squeezes enough particles of light with high enough energies into a small enough volume to create around 100,000 electron-positron pairs.The process is one of the most spectacular predictions of a theory called quantum electrodynamics (QED) that was developed in the run up to the second world war."

What this means: Scientists haven't been able to observe photon collisions before, since photons are massless and incredibly small. It was previously thought the only way to observe such a reaction would be to energize a beam of photons to massive energy levels billions of times stronger than visible light and release it into a small space, hoping to observe some reactions. The new method is much more effective.

Photon-photon collisions occur naturally during gamma-ray bursts, the most destructive explosive force observed in the universe. Normally they occur during other violent events like supernovas or hypernovas.

Director Andrei Seryi of the John Adams Institute at Oxford University told the Guardian, "It's breathtaking to think that things we thought are not connected, can in fact be converted to each other: matter and energy, particles and light. Would we be able in the future to convert energy into time and vice versa?"

When will they do it? Hopefully in the next year. The study authors say that many laboratories around the world have the equipment to complete the newly theorized process. "The race to carry out and complete the experiment is on,"  contributing physicist Oliver Pike told Extreme Tech.