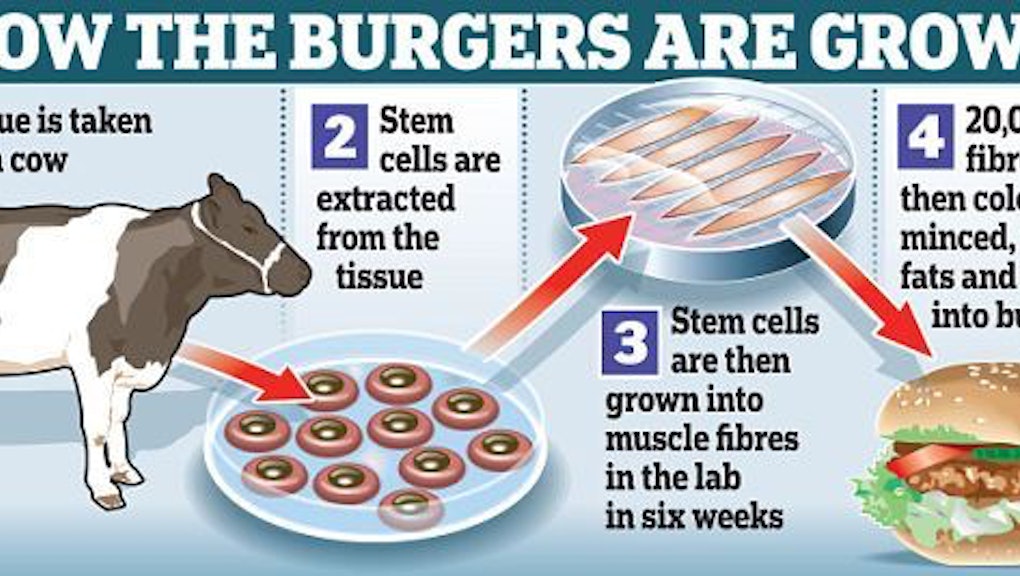 The news: Imagine a world where you could eat all the meat you ever wanted — without sacrificing a single animal's life.

The idea of synthetic meat is not a new one. Biotech start-ups have been trying for years to create lab-grown meat that can be scaled to feed the general populace; just last year, Google founder Sergey Brin unveiled a $330,000 hamburger from test tube cells. And while most people can't drop hundreds of thousands for a single burger patty, researchers believe that they are on the right track to grow synthetic meat on a localized level.

According to the June issue of Trends in Biotechnology, a pair of Dutch scientists have a novel proposal to use existing agricultural infrastructure to produce lab meat. With their model, farmers would grow a small number of livestock; but instead of being slaughtered, these animals will periodically donate their stem cells, which would be mass-replicated through a bioreactor; "pigs can act as living cell banks, while also keeping us in touch with animals, as well as the sources of our food."

"Here, all of a sudden, we get a glimpse of a possible world in which we can have it all: meat, the end of animal suffering, the company of animals and simple technology close to our homes," wrote Corvan der Weele, one of the researchers.

How does this work? Many synthetic meat start-ups, like the Bill Gates-funded Beyond Meat, try to use non-animal products; others, like the Peter Thiel-backed Modern Meadow, use tissue engineering on animal muscle cells grow them into fiber.

The Dutch researchers' model, however, would not grow actual meat fibers; instead, the animal stem cells will be replicated in a bioreactor, after which "an enzyme would then be added to make the cells clump together and settle to the bottom. Finally that slurry would be pressed into a cake, put through a grinder, and divided into patties." The month-long process would be able to feed about 2,500 people.

While some companies are trying to make synthetic meat taste and feel as similar to natural meat as possible — Brin's project partner Mark Post is developing cultured steak — the Dutch researchers' model is much more concerned about meeting consumer demand, and manufacturing the meat as quickly and efficiently as possible.

Why is this so important? While test tube meat might seem like a more palatable option to vegetarians than slaughtered animal meat, there is also a very pressing reason for this rising industry: sustainability.

Our current methods of livestock production are hardly efficient: Animals need a massive amount of water, often pollute rivers with manure and contribute to almost 15% of global human greenhouse gas emissions. Trying to supply enough meat to sustain 7 billion human beings is a struggle, and it's only going to get worse from here, as global meat demand is expected to double in the next 40 years.

Does this have a chance? But while science may be catching up to make lab-grown meat an accessible and affordable reality, there still remains the most important question: Will consumers actually want this? As fantastic as test tube meat may be, if people reject "Frankenmeat," it's not going to go anywhere. And public opinion is not encouraging right now — a Pew survey last month found that less that 20% of Americans said they'd even try meat that was grown in a lab.

Still, the poll found that younger people were more open to the idea of synthetic meat. And as the burgeoning human population demands more and more meat — and our natural resources are thinner and thinner — people might reconsider rejecting lab-grown meat out of hand. The idea might seem gross at first, but with this technology, we can keep our pig — and eat it too.