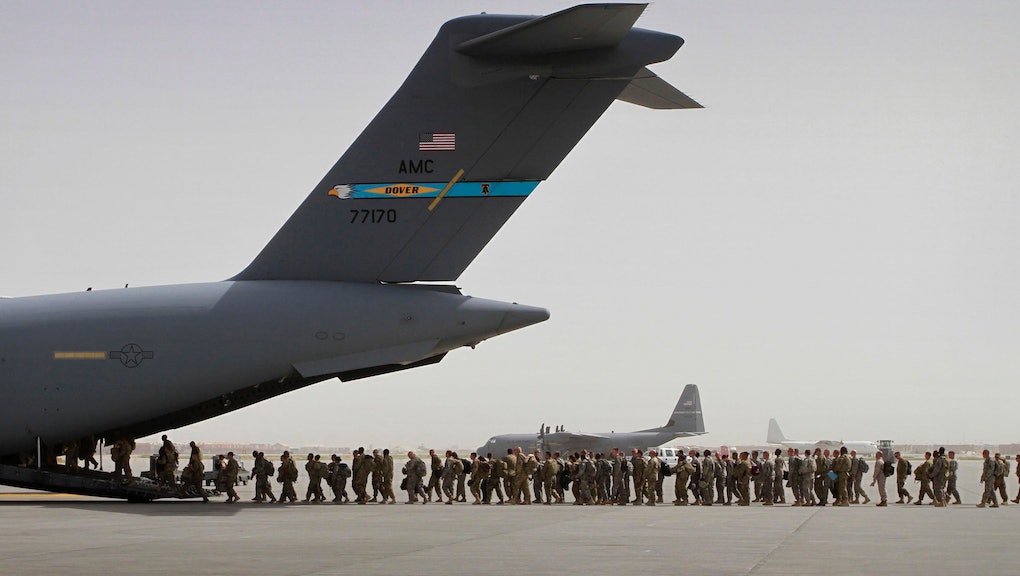 The War in Afghanistan Is Finally Over

The news: America's longest-running war is finally coming to a close. President Obama announced on Tuesday plans to leave a residual force of 9,800 troops in Afghanistan after 2014. By 2016, most U.S. armed forces will be out of the country.

A senior official in the Obama administration explained, "combat mission will be over by the end of 2014 ... we are open to continued efforts in Afghanistan on two narrow missions after 2014: training Afghan forces and supporting [counterterrorism] operations against the remnants of al-Qaida. We will only sustain a military presence after 2014 if the Afghan government signs the bilateral security agreement (BSA)."

Assuming the BSA will be signed, a significant number of the 33,000 U.S. troops currently in the country will be sent home. (In 2011, there were 100,000 troops in Afghanistan.) The 9,800 force will be scaled down by half by the end of 2015 and eventually, by the end of the following year, only those serving as a security assistance force for the U.S. embassy in Kabul will remain.

The new image of Obama's foreign policy: President Obama inherited two wars and has been cleaning up the mess he was dealt ever since he arrived in office. With two years left in office, the president is obviously thinking about his legacy.

Most recently, he has been taking heat for modest military interventions in the escalating situations in Syria and Ukraine. In April, Obama spoke about looking back and learning a lesson from history. "Why is it that everybody is so eager to use military force after we've just gone through a decade of war at enormous costs to our troops and to our budget?" he said. "And what is it exactly that these critics think would have been accomplished?"

The president and his administration were unable to prevent Russia from annexing Crimea and pulled back a military strike in Syria, but Obama's foreign policy is not finished just yet.

Publicly, the U.S. provides nonlethal aid, like food rations, clothing and first aid supplies to Syria. A Frontline documentary airing Tuesday night may prove more intensive U.S. intervention in the country, overt or not:

"The interviews [in the documentary] are the latest evidence that after more than three years of warfare, the United States has stepped up the provision of lethal aid to the rebels. In recent months, at least five rebel units have posted videos showing their members firing U.S.-made TOW anti-tank missiles at Syrian positions. The weapons are believed to have come from Saudi Arabia, but experts on international arms transfers have told McClatchy that they could not have been given to the rebels without the approval of the Obama administration."

Syrian rebels say that the U.S. is arranging their military training and teaching fighting techniques to help the rebels take on forces loyal to Syrian President Bashar al-Assad, which are gaining steam in the country's three-year civil war.

Clearly Obama is eager to put the Iraq and Afghanistan wars behind him. However, discreet military tactics may not be the best foreign policy either. With Karzai's signature on the BSA, the Obama administration is at least headed in the right direction for the time being.

Why is the BSA only being signed now? The BSA has long eluded the U.S., mainly due to Afghan President Hamid Karzai's reticence to sign the deal. In February, President Obama requested that the Pentagon draft plans to remove all U.S. forces from Afghanistan by the end of 2014. Prior to that, Vice President Joe Biden was a proponent of a smaller residual military presence of 2,000 to 3,000 troops.

In any case, the White House has been publicly pushing for Karzai's signature on a BSA since 2013, threatening to repeat the "zero option" that transpired in Iraq. After failing to sign a BSA with Iraq in 2011 (a major stipulation of which was "that [it] included immunity from prosecution for the U.S. military"), this "led to the complete withdrawal of U.S. troops from that country," which makes the Afghanistan deal a huge win for the Obama administration.