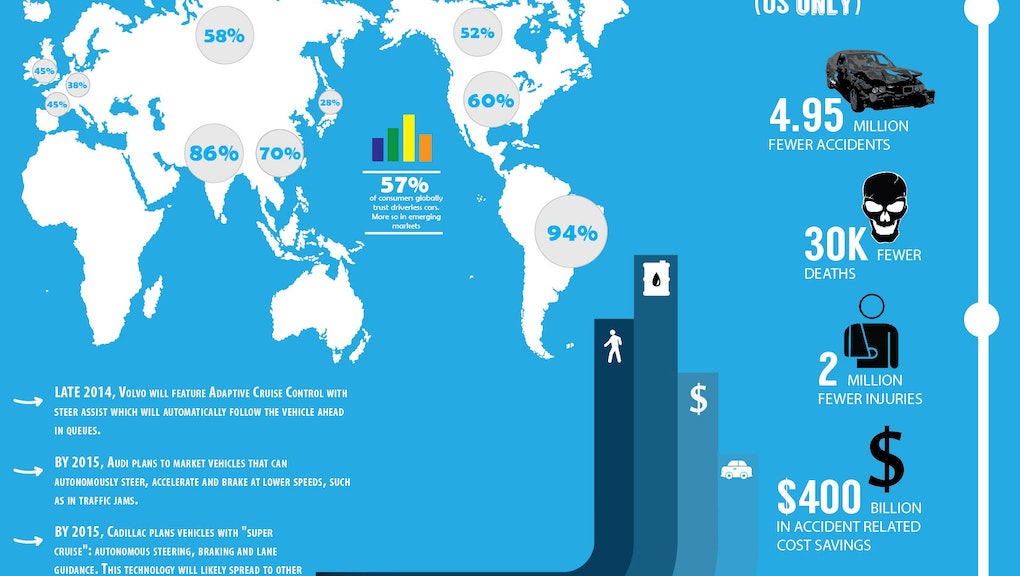 The news: Google has announced its design for self-driving cars. And lo and behold, the things don't even have a damn steering wheel, brakes or a gas pedal. Just two buttons for "go" and "start."

The new design, unlike previous models that retrofitted Toyota and Lexus vehicles, seats two people with plenty of room for groceries (or a dog), and is driven entirely by an onboard network of computers and sensors. Google will build 100 copies of the vehicle for testing this summer, which will have driving controls in case of an emergency. But the eventual plan is for the cars to not have any manual controls at all.

The new version was revealed by Google cofounder Sergey Brin at the Re/Code Conference. A video of the car in action can be seen below:

Google believes it can eliminate 90% of automobile fatalities by designing automated cars that are highly reliable, safer and more efficient. According to Brin, the prototype was assembled using off-the-shelf parts, including lots of foam and an electric motor. Brin says the vehicles could be the vanguard of a fleet of automated cars that serve communities without urban mass transit options.

The background: Google has made impressive strides since information on its driverless cars was leaked last August. At that stage, the description of a fleet of "robo-taxis" seemed to be merely in the discussion stages. Less than a year later, we're already seeing prototypes clearly headed for long-run commercial production.

Google's self-driving cars have driven more than 700,000 miles on public roads without ever getting a single citation or attracting the attention of police officers. While Google insists that the company that designed the car should pay associated traffic tickets, the project has been so successful that driverless cars could threaten to do away with traffic tickets nearly entirely, crippling a valuable source of revenue for state and local governments. Around 41 million people receive speeding tickets across the U.S. every year, paying out $6.2 billion or $300,000 in revenue per U.S. police officer.

Even if you are somehow sympathetic to this argument (who wants to pay traffic tickets?), the problem is a little overblown. In the real world, self-driving cars would be a huge boon for society. Next Big Future notes that not only would Google cars eliminate the scourge of tickets, but that car crashes cost the U.S. $400 billion a year, and congestion costs $100 billion. If everyone was driving around in safe and efficient robo-taxis (which won't happen for decades), it would actually save everyone a whole lot of time, suffering and money.

Why you should care: Google is very serious about moving forward with this project. They're already working with governments to make sure driverless cars are regulated, safe and insured. According to Brin, the cost of the technology going into each unit is going down rapidly. The self-driving future may be a widespread reality within your lifetime.