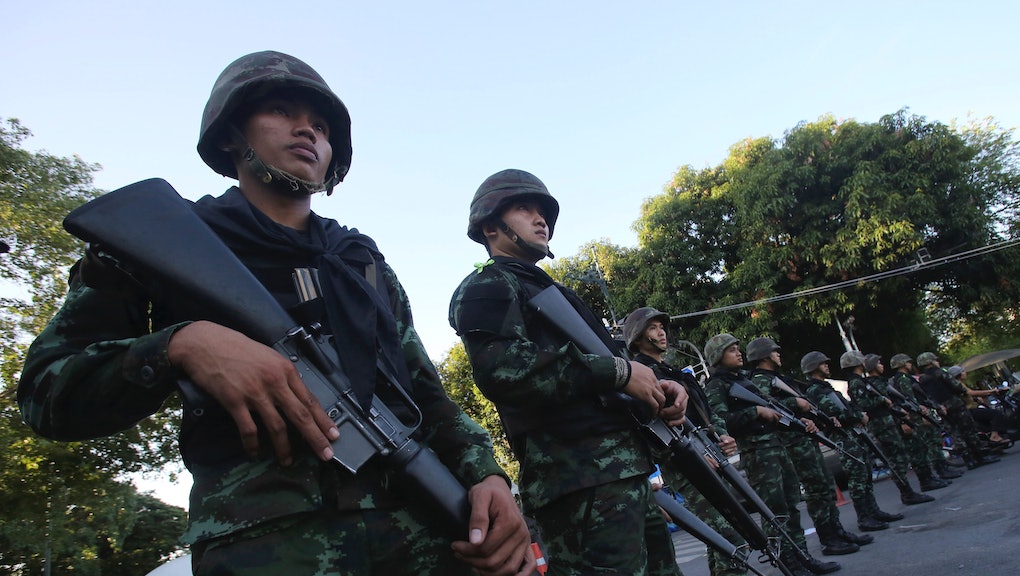 What Life Is Really Like Under Military Rule in Thailand

This was a piece written anonymously by a young Thai person who currently resides out of the country and asked not to be named for security reasons.

I was 8 years old when I experienced my first coup d'état.

It was in 1991. All I remember was watching an evening soap with my mother when suddenly the program was interrupted by men in uniform who appeared on the screen to say something like, "We have taken over power … Everything will be okay … We will restore peace and order."

Image Credit: Kraipit Phanvut/AFP/Getty Images. Members of Thailand's military stand before the Supreme Command headquarters, after ousting Chatichai Choonhavan, who was prime minister at the time.

The announcement worried my mother, but not because there was a coup. Because my father, a high-ranking military officer, could not be reached. He returned several days later and we never spoke about what happened. But I knew that things would not be okay like his fellow soldiers promised. Not long after, the military committed one of the most brutal crackdowns on innocent protesters — in defiance of the military rule.

The coup d'état on May 22 was my third. That's a coup for every decade that I've been alive. Maybe that's not that many, given that this is Thailand's 19th coup attempt since the country became a constitutional monarchy in 1932.

Image Credit: AP. Young girls take a photo in front of a military tank after the country's coup in 2006.

This coup sheds light on the military's complicated role in Thailand's history.

The latest military takeover was carried out in the name of stability, but its reasons are more complex than that. Thailand has been divided by political unrest since October last year. Bangkok, the country's capital, has been a battleground between anti-government and pro-government protests. Key intersections in the city's center have also been occupied by anti-government protesters.

Image Credit: AP. An anti-government protester washes her eyes after being sprayed with tear gas during clashes with riot police in December 2013.

The protesters have even occupied the government headquarters, unseating the government in the process. They have prompted the prime minister to go in hiding, which is part of a long list of problems that have made the country ungovernable.

The country becomes quiet when the military takes over. It means no more gatherings of five or more people, people must abide by a curfew between 10 p.m. and 5 a.m. and censorship. A reporter, who took a picture with soldiers with a tape crossing her lips, was swiftly fired for defying the military. Subsequent (very small) anti-coup protests were also met with force and intimidation.

The coup enforces this silence by displaying guns and tanks and by silencing dissent. Things are calm in the days after the coup, but not because of the military's ability to calm social unrest. The silence is the byproduct of a paralyzing fear. A fear that takes away your courage and cripples you from standing up for what you believe in. But also, a fear of the sort of uncertainty that comes with social unrest.

That's why I'm not surprised that many Thais, wanting stability, are happy about the coup. Taking a "selfie" with soldiers on the streets is now a trend. A Facebook page dedicated to supporting the military government has already garnered over 250,000 likes.

Image Credit: AP. Civilians take a photograph of themselves with members of Thailand's military.

Whether or not they support the opposition movement that values the military's role in politics, some people were simply relieved that order might be restored in the country. We can't blame people for preferring stability over chaos, right? Or can we?

After all, the process for democracy is messy, and in developing countries that road is filled with corruption, little accountability and a power struggle usually most costly for the people.

Amartya Sen says that "democracy is a universal value" because without civil and political liberties we cannot live a fulfilling life free from fear.

The military in Thailand feels democracy is not "right" for us. That Thailand is not ready for such a foreign, western concept as democracy. And so autocratic regimes (and fear) remain — all in the name of stability.

But it's easier said than done. Even though I was educated in the West and taught to believe firmly in democratic values and human rights, my first immediate reaction to the coup was confusion. The thought of men with guns running the country should have caused a knee-jerk reaction and made me sick to my stomach.

But like many of my fellow countrymen, I have conflicted feelings when it comes to the military. I both love and fear the men in uniform; I realize the military serves different purposes in our lives.

I think of the time when the soldiers pulled my mother out of our house, two meters deep under water, onto a raft and saved her life and the lives of millions more during Thailand's worst floods in 50 years. Then I remember the military crackdown on opposition movements in 2010 when more than 100 died and scores were injured.

Since the martial law was imposed, Thais have been told not to defy the military's order, to keep their heads down and mouths shut. The men in uniform say that the people must "let them" do what is best for the nation. But what is "best" for our nation? How would the military know if we are not allowed to speak our mind?

Image Credit: AP. Members of Thailand's military face off with protesters in Bangkok.

The military needs to find a comfortable home under the rubric of democracy, under civilian rule. It is the only way the military can protect us from harm. It's when we can speak openly and freely about what or who is harming us. Under military rule, we lose that freedom — not entirely, but significantly. Once fear sets in, freedoms become blurred and retracted in the name of keeping "peace and order."

We can't trade democratic freedoms for order guaranteed by the barrel of the gun. Because underneath that seemingly "ordered society" is repression and tragedy.

I wish I could put my name on this article. But I am still afraid. And that's the fear that needs to disappear.