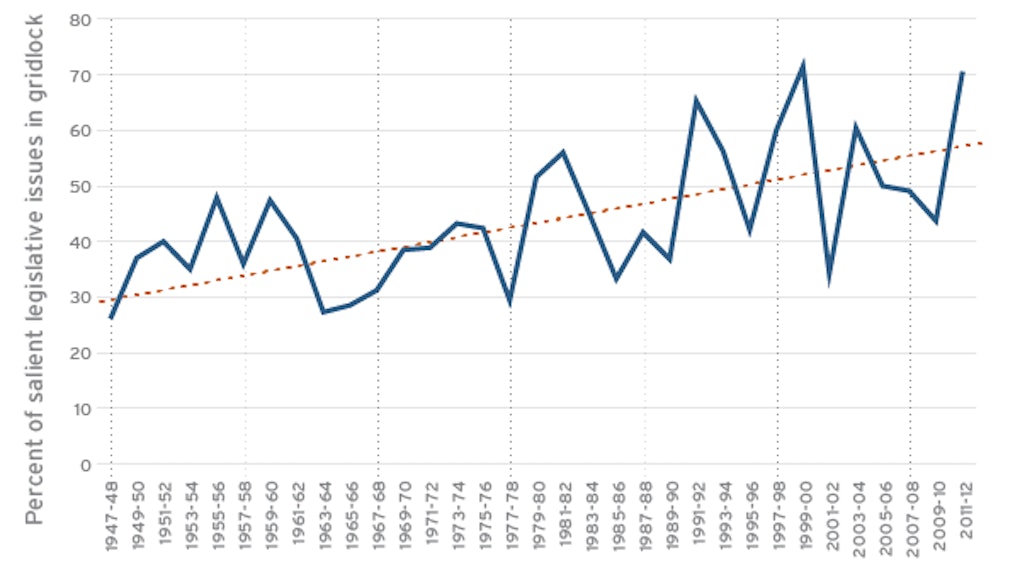 One Graph Shows Why Nothing Will Ever Get Done in Washington

The news: This graph from Brookings Institution researcher Sarah Binder finds that the real reason D.C. isn't getting anything done is pretty clear: partisan gridlock.

Today, "75% of the salient issues on Washington's agenda are subject to legislative gridlock" — the kind of agree-on-nothing gridlock that's crushed virtually every major piece of legislation heading through Congress today.

The methodology: Binder "examined the unsigned editorials" in the New York Times to calculate the degree of deadlock in major issues in Congress from 1947 to 2012. (Only "salient" issues were included, those on which the New York Times wrote four or more unsigned op-eds during a single Congress.) Overall agendas increased significantly, but the number of "salient issues" rose "markedly" in the 108th (2003–4), 110th (2005–6) and 112th (2011–12) Congresses. She found that as the House and Senate chamber medians grow farther apart on policy prescriptions, gridlock grows regardless of party.

Basically, as the line goes up, the number of items left in congressional limbo does too. The result is that the federal government is taking action on fewer and fewer issues.

Binder's report confirms that polarized politics are behind the past few years of congressional inaction, highlighting as a key culprit the split GOP control of the House and Democratic control of the Senate since the 2010 midterm elections. She tentatively concludes that it is likely that recent imbalance does not in and of itself pose "permanent, systemic problems." But she also notes that deadlock is still rising, that it causes problems in and of itself (like last year's uncertainty over the fiscal cliff), and that the ideological gap between Democrats and Republicans seems unlikely to subside anytime soon.

What's more, exacerbating the current gridlock is an asymmetrical gap: Republicans have clearly moved much farther to the right than Democrats have moved in any direction. And in an era where minority status in Congress can be "intolerable" and electoral concerns grow greater than ones of governance, that puts us in a unique quagmire.

"So long as some degree of polarization is driven by sheer partisan team play — in which the opposition party is more likely to object to proposals endorsed by the president — then extreme levels of polarization will continue to lead to unprecedented levels of deadlock," writes Binder.

Of course, if you're a Republican in Congress right now, that gridlock is more or less a product of the entire strategy. Why compromise now when you can take the whole cake and eat it too in 2016? Furthermore, if you're ideologically opposed to the federal government, then gridlock would be a feature rather than a bug.

Will it get worse? It seems so, barring major victories by either party that allow them to have uncontested control of the legislative and executive branches at the same time. That's still the golden ticket toward legislative productivity, and could very well happen.

Currently, we're standing at just 71% gridlock by Binder's measures. As the Washington Post's Christopher Ingraham notes, that leaves quite a lot of room to get worse.