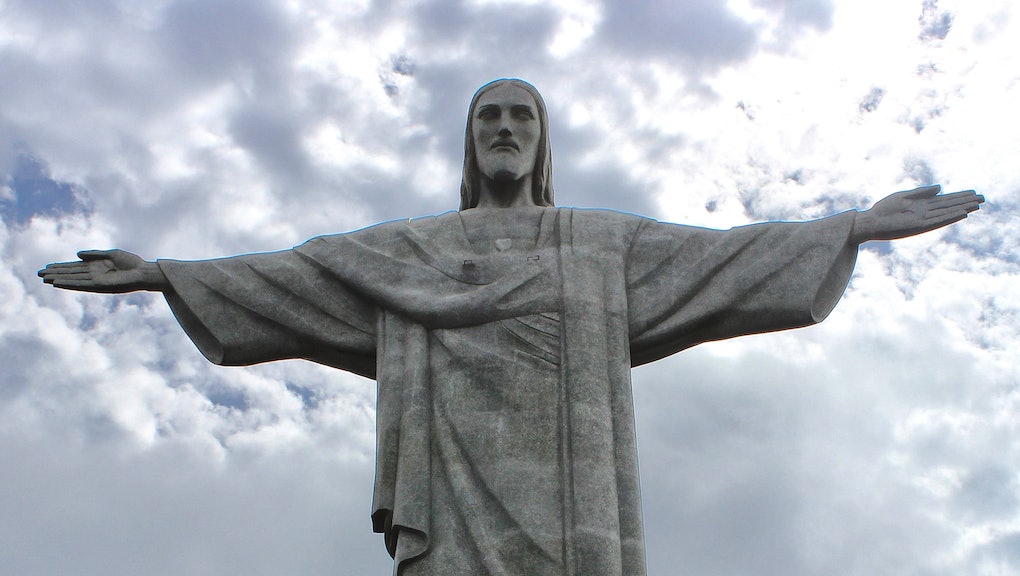 7 Reasons Why Jesus Would Have Been a Proud Feminist

You probably have heard a lot about Christianity, especially when it comes to the religion's stance on homosexuality and women's rights. But while some the media's narrative has often focused on the religion's conservative, often proudly patriarchal adherents, there's a compelling argument to be made that Jesus himself had a touch of feminist in him — at least according to the anecdotes about him related by his followers in the Bible's New Testament.

A commonly accepted definition of feminism, as denoted by Chimamanda Ngozi Adichie, is "a person who believes in the social, political and economic equality of the sexes." While Jesus does not ever explicitly call himself a feminist in the Bible, he also doesn't technically call himself a Christian (How could he when neither term had not been invented yet?). But semnatics aside, the religious leader's actions throughout the gospels have strong hints of gender equality, especially in the context of what many of his contemporaries were saying and writing on the subject. Indeed, Jesus' counter cultural moves contradicted the patriarchal culture of that time in more ways than one.

Not surprisingly, even in the first century, Jesus' responses brought reproaches from men at that time, at least according to the Bible. The parallels to modern culture are clear. Here are a few of the reasons why the New Testament makes a compelling case for Jesus' legacy as one of the first male feminists in the Christian church.

1. He believed women deserved the chance to study.

The position of sitting at the feet of a Rabbi was culturally reserved for men only, and typically, only for future Rabbis. But Mary sat there and listened to Jesus as he taught, as detailed in Luke, Chapter 10. This was despite the fact Martha, Mary's sister, asked Jesus to tell Mary to come help her in the domestic tasks. Essentially, Martha was asking Jesus to put Mary back in her place. Yet Jesus declined and allowed Mary to stay where she was — a clear affirmation of Jesus' respect.

The New Testament also includes the story of a woman who had suffered terrible hemorrhages for 12 years. The story went that although the woman had spent years seeing physicians, no one could cure her. She sought Jesus out for healing, believing that if she touched even just his robe, she would be healed.

Jesus spoke out on divorce, only condoning it under specific grounds of adultery or being unfaithful. Before that time, in Mosaic Law, a divorce was granted much more easily. While prohibiting divorce may seem like it would have been bad for women, in fact this move can be interpreted as a protective measure meant to fight a patriarchal system that treated wives as possessions, to be picked up and dropped with little warning and no explanation, leaving a woman in a place of poverty and potential abuse as a result. Jesus' teachings on laws of divorce protected women from the profound economic implications of being "sent away" by their husbands in that time period.

Unfortunately, this passage has been twisted in the modern context to try to support a patriarchal attitude toward marriage, especially by conservative Christians.

4. He chose women to spread his most important messages.

The Bible notes that after Jesus was crucified and rose from the grave, it was a group of several women, including Mary Magdalene, whom the angels first told Jesus had risen. The men of that time believed their story to be "nonsense." But it shouldn't be mistaken as coincidence that the angels, and then Jesus, appeared to the women first. This suggests that Jesus trusted the opinions of the women, perhaps even more than Jesus' apostles.

Indeed, Mary Magdalene, a woman from a village near the Sea of Galilee, is reportedly the first person Jesus revealed himself to. She in turn was the one to spread the news of the miracle to the other, male apostles. This act is the beginning of what some might call a new era, an era that begins with women, not men. The important 13th century theologian St. Thomas Aquinas called her "Apostle of the Apostles" noting that, "just as a woman had announced the words of death to the first man, so also a woman was the first to announce to the Apostles the words of life."

5. He fought against slut shaming.

John writes that one day a woman was caught in the act of adultery and brought to Jesus by the scribes and Pharisees. She wasn't married (which really shows where we place the blame in extramarital affairs), but was caught with a married man. Regardless, the punishment at the time for this sort of indiscretion was death. However, instead of stoning her as would have been the custom, Jesus asks for those without sin to cast the first stone.

"At this, those who heard began to go away one at a time, the older ones first, until only Jesus was left," Luke writes. After everyone had gone, Jesus finally straightened up and asked the woman where her accusers are. There are no accusers left, of course, and Jesus declared that neither would he condemn her.

6. He respected the opinions of women.

A non-Jewish woman from another region begged Jesus to cast a demon out of her daughter. Jesus replied "Let the children be fed first, for it is not right to take the children's bread and throw it to the dogs."

7. He respected and elevated the role of mothers.

Mary, the mother of Jesus, is a mainstay in the more famous contemporary Christian scenes, especially the Christmas narrative regarding the birth of Jesus. But Mary was much more than just the mother of Jesus. In fact, she is described as one of the most faithful and steadfast of Jesus' followers. She is there at the most painful time as well, as Jesus is tortured and executed on the cross.

After watching her only son die, Mary is also with his apostles as they mourn his death and decide what next steps to take in his memory — steps that will indeed inform the foundation of the modern Christian church.