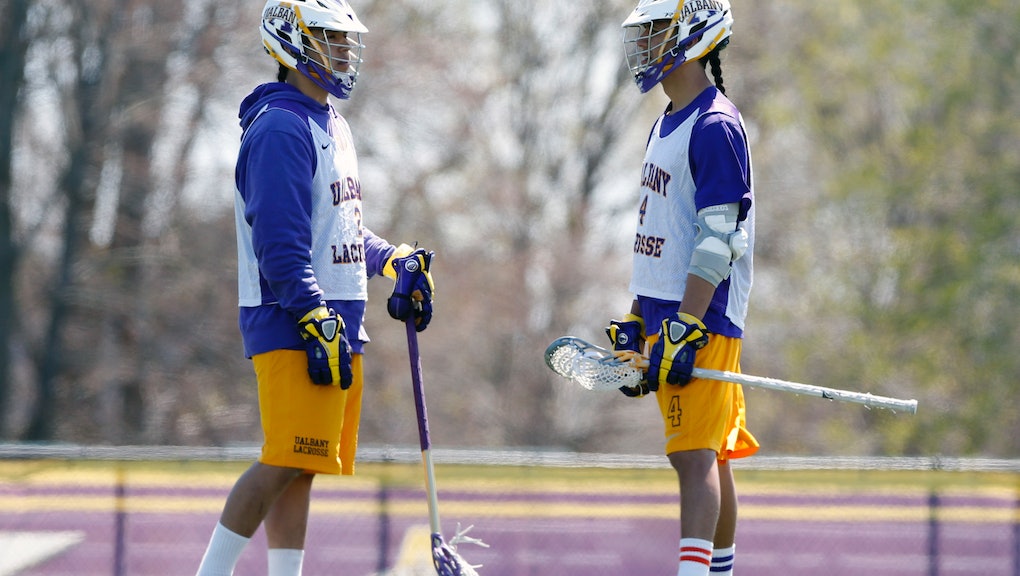 How These Native American Brothers Became a College Lacrosse Phenomenon

Miles and Lyle Thompson, brothers from the Onondaga Nation in upstate New York, have broken records and shattered perceptions throughout a season that could end this week with the sport's highest honor.

The attackmen for the University of Albany are among the five men's finalists for the Tewaaraton Award, college lacrosse's equivalent of the Heisman Trophy, which will be awarded Thursday at the Smithsonian Institution's National Museum of the American Indian. No Native American player had even been nominated for the honor prior to the Thompsons.

Known for their aggressive attacking style, the Thompsons became the first teammates in Division I history to record 100-point seasons. The 23-year-old Miles, who just finished his senior year, led the nation with 4.56 goals per game and matched the national record for goals in a season with 82. The 21-year-old Lyle, a junior, set a Division I record for assists (77) and was the only player with more points (114) than Miles, breaking former UMBC standout Steve Marohl's 22-year-old mark. Their stick skills — and seemingly telepathic connection — have received a national platform throughout their history-making campaign.

Above, you can see Lyle being shut off by a defender behind the net, but he's able to whip a perfect pass through defenders to Miles, who one-times it past the goalie. Plays like these have become commonplace at Albany, where, along with cousin Ty Thompson, the Great Danes blossomed into the nation's highest-scoring offense.

Yet the Thompsons' influence only begins with their on-field dominance, a success that's helped create new opportunities for those with similar backgrounds.

Because of their individual excellence, college recruiters have renewed their efforts in recruiting Native Americans for their programs. Since the Thompsons' breakthrough, Native players are enrolling at campuses as far-flung as Virginia and Denver, whereas previously, because of its proximity to the reservations, most only considered enrolling at Syracuse.

Miles and Lyle, both coveted high school recruits, took a different path, signing with Albany despite the prestige and proximity of Syracuse, just a 20-minute drive from the Onondaga Reservation. "We wanted to do something different. We knew all of the big-time Natives were already going to Syracuse," Miles said. "We wanted to try to make a difference on our own."

Lyle echoed those sentiments: "Syracuse honestly didn't recruit both of us too hard. I think they just expected us to go there."

Should either brother win the Tewaaraton — which is, in fact, the Mohawk name for lacrosse — the symbolism would be unmistakable. The sport has deep roots in tribal culture, a traditional activity of tribal warriors for training, recreation and religious reasons. The games were major events for the tribes, and would take place over several days. The modern version of lacrosse originates from the Iroquois, and the Onondaga Nation, the nine-square-mile independent political entity where the brothers were born, is one of the original five constituent nations of the tribe.

Albany's season ended with a 14–13 loss to Notre Dame in the quarterfinals of the NCAA tournament which saw the Great Danes fritter away a five-goal lead in the fourth quarter. But the capacity crowd of 13,519 at Hofstra's Shuart Stadium indicated just how massive the Thompson phenomenon has become.