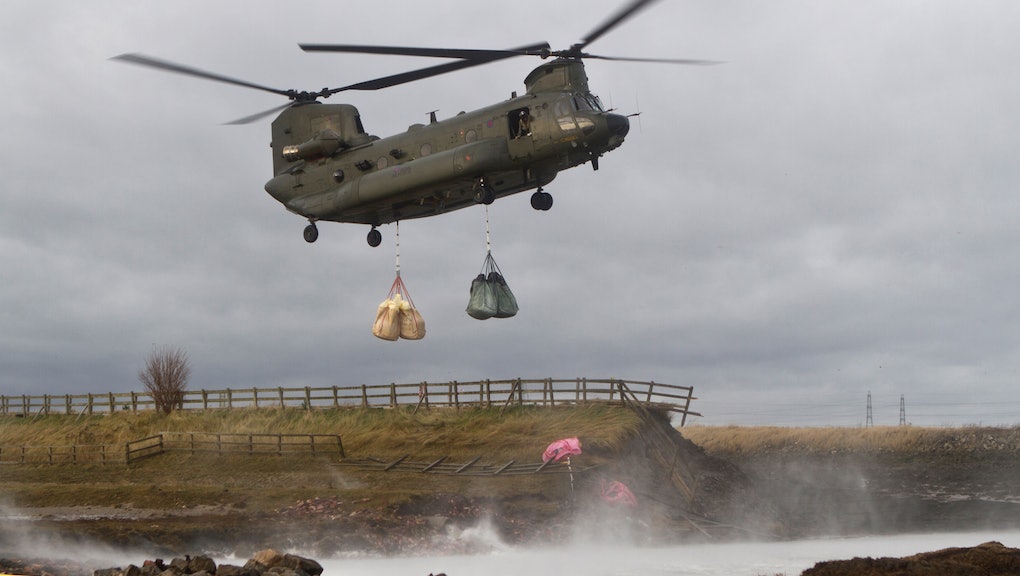 Congress Is Refusing to Let the Pentagon Combat a Threat That Could Actually Hurt the U.S.

The news: Normally, when the Pentagon wants to fight something, it uses guns, bombs and drones. But this time, they want to fight climate change — and Congress is standing in the way.

Just before Memorial Day weekend, Republicans in the House of Representatives voted to authorize an amendment preventing the Department of Defense from using any of its allocated funds to prepare for a warming climate or higher sea levels. Attached to the National Defense Authorization Act, the Republican amendment reads:

None of the funds authorized to be appropriated or otherwise made available by this Act may be used to implement the U.S. Global Change Research Program National Climate Assessment, the Intergovernmental Panel on Climate Change's Fifth Assessment Report, the United Nation's Agenda 21 sustainable development plan, or the May 2013 Technical Update of the Social Cost of Carbon for Regulatory Impact Analysis Under Executive Order.

Essentially, it bans the Department of Defense from even considering important documents on climate change issued by the IPCC, the White House or the government's top agency handling climate change-related research. And it sends a clear message that Congress doesn't want the military from even considering long-term programs to adapt to a different world. The amendment passed on a nearly unanimously partisan vote, 231-192. Rep. David McKinley (R-W.Va.) sponsored the bill, saying:

Our climate is obviously changing; it has always been changing. With all the unrest around the global [sic], why should Congress divert funds from the mission of our military and national security to support a political ideology. This amendment will ensure we maximize our military might without diverting funds for a politically motivated agenda.

Yeah, but does the Pentagon really care? You betcha. Both the 2014 Quadrennial Defense Review and a study written by a group of retired senior commanders called "National Security and the Accelerating Risks of Climate Change" call for significant action to prepare military facilities and logistics chains for global warming. The Quadrennial Defense Review warns that rising greenhouse gas emissions, rising sea levels, droughts, extreme weather and a hotter climate are all "threat multipliers" that could aggravate instability across the globe. In addition to making missions much harder to conduct, global warming could destabilize entire governments and exacerbate the root causes of violent phenomena like terrorism.

Last March, Adm. Samuel Locklear (the man in charge of monitoring North Korea and China-Japan tensions) identified climate change as the biggest long-term threat to stability in the Pacific. He warned that "We are on super typhoon 27 or 28 this year in the Western Pacific. The average is about 17," and said that the "not-too-distant future" could see entire nations displaced by severe weather pattens.

In an interview on the Colbert Report, Secretary of the Navy Ray Mabus warned that "As the ice is melting in the Arctic, our responsibilities increase. Seventy percent of the world lives within 40 miles of an ocean. And so as sea levels rise, instability follows."

The report by 11 retired generals and admirals, who serve on the CNA Corporation Military Advisory Board (MAB), pointed to a case study of the Hampton Roads metropolitan area in southeast Virginia as an example of a potential crisis that would adversely impact the military. There are 29 military sites in the area, almost all of which are at or only very slightly above sea level. But the MAB warns that "Estimates of relative sea level rise in the Hampton Roads area range from 1.5 feet over the next 20–50 years to as high as a 7.5-foot rise by 2100 (above the 1992 mean sea level baseline)."

Facilities like Langley AFB would find themselves suddenly on the coastline, while naval stations would need massive amounts of retrofitting to avoid flooding.

But none of these excuses can credibly challenge the fantastically robust scientific case for climate change, which, depending on who you ask, has anywhere from 97-99-plus% of environmental scientists on board. The MAB insists that they support scientific skepticism, but "falling short of 100% agreement is not a justifiable reason for inaction."

If America's congressional leadership won't even allow the military to prepare its bases for climate change, then it certainly doesn't look good for us living civilian lives, either.