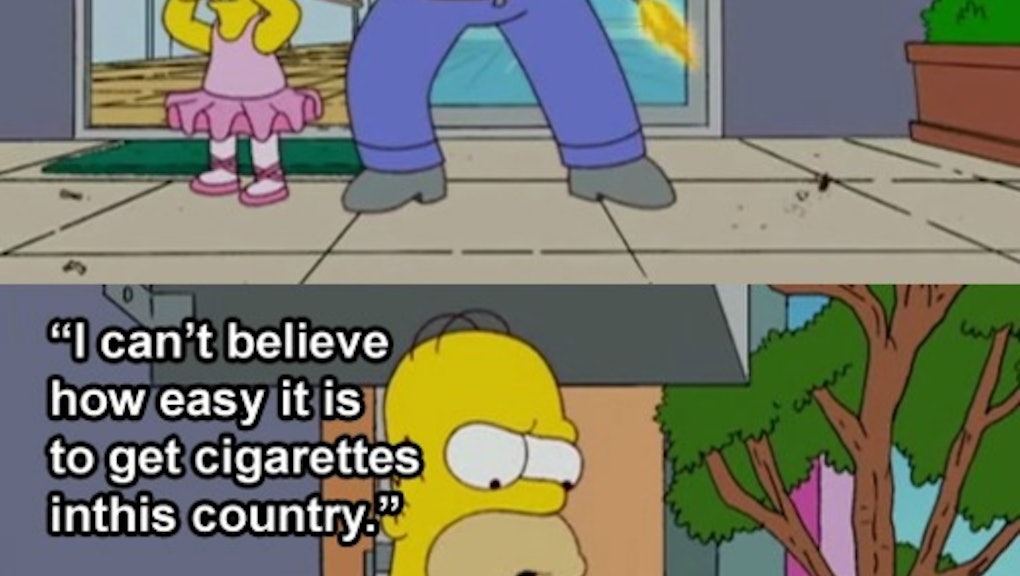 America has basically done nothing to advance gun control measures despite a track record of horrifying gun crimes, making it an outlier in international rankings on gun safety. In the U.S., a 2013 study found that an increase of firearms ownership by 1% translates almost directly to a 1% increase in death by firearm.

That's why this comic taken from 19th season Simpsons episode "Smoke on the Daughter" — which aired all the way back in 2008 — is still darkly relevant:

The background: Scientists and public health experts agree. Widespread public availability of firearms is not safe and increase the number of firearms-related incidents that result in unnecessary damage, injuries, and fatalities. According to NYU researcher Sripal Bangalore:

"The gun ownership rate [is] a strong and independent predictor of firearm-related death ... There was a significant correlation between guns per head per country and the rate of firearm-related deaths with Japan being on one end of the spectrum and the U.S. being on the other. This argues against the notion of more guns translating into less crime.""Although correlation is not the same as causation, it seems conceivable that abundant gun availability facilitates firearm-related deaths. Conversely, high crime rates may instigate widespread anxiety and fear, thereby motivating people to arm themselves and give rise to increased gun ownership, which, in turn, increases availability. The resulting vicious cycle could, bit by bit, lead to the polarized status that is now the case with the U.S."

According to the Council on Foreign Relations, gun ownership in the U.S. is incredibly disproportionate to the rest of the developed world. They point to Australia, Israel, the United Kingdom, Norway, and Japan as countries which have enacted comprehensive, large-scale firearms regulations that proved highly effective.

A study by Third Way found that firearms are widely available on the Internet and that such sales usually aren't subject to regulation. In some states, it's easier to buy a gun than get an abortion. Many states have looser laws on gun sales than they do on prescription drugs or driver's licenses. The BBC found that it was pretty easy to buy an AR-15 rifle without going through any kind of screening or background check.

Why you should care: Loose gun laws in the U.S. mean that American citizens are at a higher risk of dying from firearms, a danger with few parallels in other industralized, democratic countries. The ease with which someone can get a gun is also a unique feature of American firearms laws, which are rife with unintentional loopholes that are nonetheless staunchly defended by the gun lobby and Second Amendment activists.

Bonus: We're a big fan of the The Simpsons, so this classic clip is still relevant and hilarious: