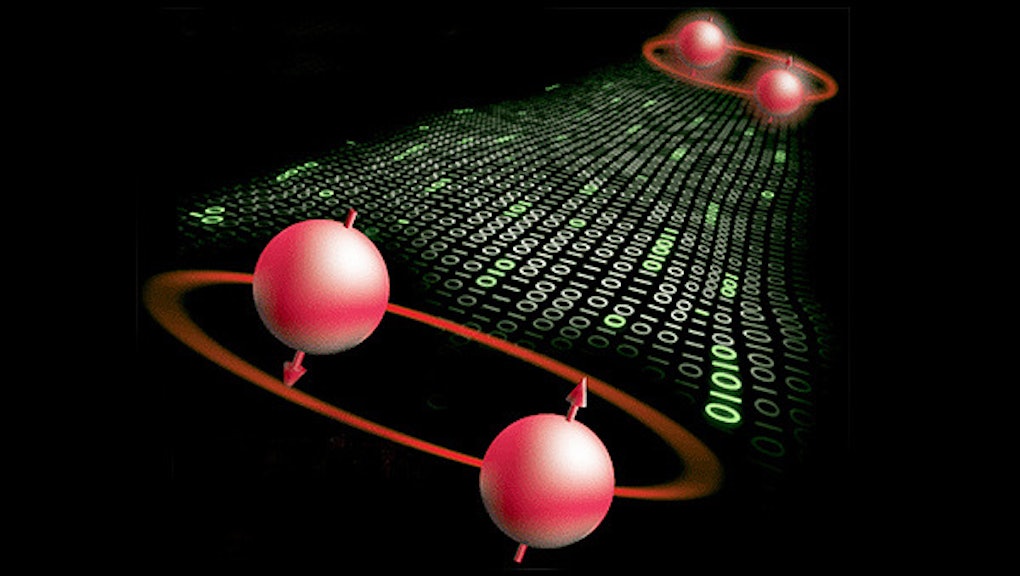 The news: It's not every day that you get to say Albert Einstein was wrong.

On Thursday, scientists from the Netherlands announced that they were able to achieve quantum teleportation — a feat that Einstein once dismissed as "spooky action at a distance."

In a new paper published in the journal Science, physicists at the Kavli Institute of Nanoscience at the Delft University of Technology said they were able to "reliably teleport information between two quantum bits separated by three meters, or about 10 feet." This goes against Einstein's notion of particle entanglement, and is a huge breakthrough for quantum mechanical theory — and information transmission as we know it.

What is quantum transportation? Despite what the name suggests, it doesn't have anything to do with transporting matter, Star Trek-style.

Entanglement is a quantum phenomenon where two articles, separated by distance, can affect one another as though they are attached, or part of the same system. Quantum teleportation involves transferring quantum information from one place to another without moving the physical matter to which it is attached.

The Dutch scientists were able to send quantum data of the spin state of an electron to another electron about 10 feet away with a 100% replication rate — the first feat of its kind. They are hoping to increase the distance to a kilometer next.

"There is a big race going on between five or six groups to prove Einstein wrong," said Ronald Hanson, one of the lead researchers. "There is one very big fish."

Why this is important: This isn't just about sticking it to Einstein — quantum teleportation has the potential to revolutionize data transmission, computing and even the entire Internet. It's faster than Comcast. Faster than Google Fiber. Once perfected, a quantum Internet that's built upon it could mean instantaneous transmission and receipt of data around the world or even the universe.

Quantum computers would be much faster than the computers we have now, allowing calculations that are out of our grasp; a quantum Internet would be able to instantly transmit data around the world. And there are big privacy implications as well: a closed quantum network would allow a user to access a server without the operating being able to determine the nature of the content. It's long ways from human teleportation, but this is still huge and exciting.