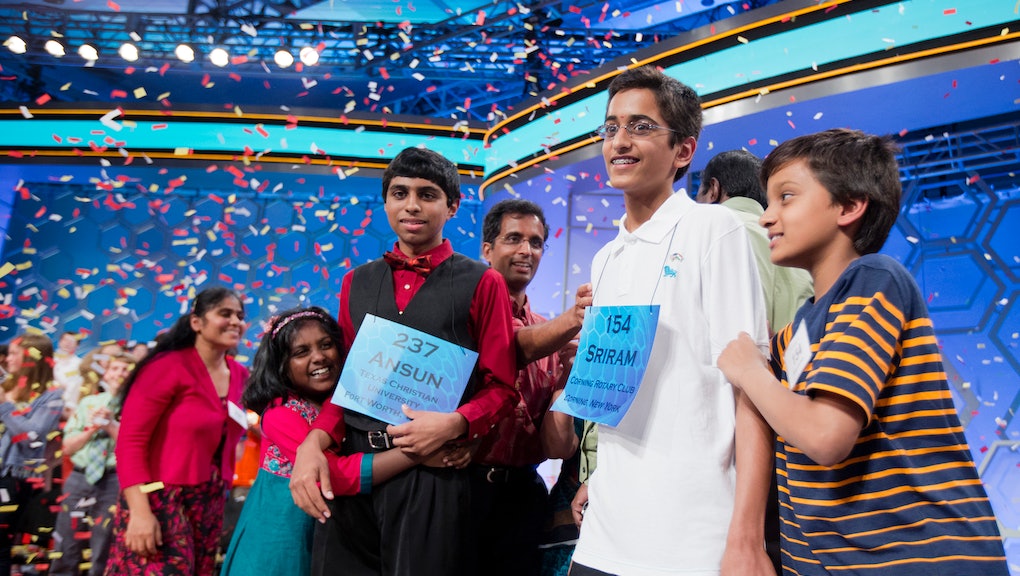 The news: These young men are Ansun Sunjoe and Sriram Hathwar.

On May 29, they became co-champions of an especially hard-fought Scripps National Spelling Bee.

In the past few years, the 89-year-old competition has seen a striking pattern in which Indian-American contestants have lifted the winner's trophy eight consecutive times and in 13 of the past 17 outings. Their streak feeds into years of conversation around race, achievement and immigrant success — all tied to problematic notions of what it means to be "American."

Exhibit A: At this point, it's almost a foregone conclusion that xenophobic vitriol would engulf Twitter after Sunjoe and Hathwar's win. Here's a sampling from Thursday night:

A clear notion of American identity fuels these comments. Even if you hail from suburban Texas or small town New York — as the teenage co-champs do — presumption dictates that your brown skin and unfamiliar names exclude you from traditional (read: white) concepts of American-ness.

But such reactions aren't without precedent. Examples are found in a report on "bias-based bullying" assembled by the Asian American Legal Defense and Education Fund and the Sikh Coalition last year. The report found that 54% of Asian-American students in New York City schools have been bullied in the classroom, the highest rate of any ethnic group.

And according to a 2009 Department of Justice student survey, these same students — namely those of East Asian, South Asian and South Pacific heritage — are "the most likely of all racial groups to report verbal abuse relating to their race, ethnicity or religion."

However: Anxieties around Indian-American dominance of the Bee might also be linked to their tenuous position in American society.

The New York Times reports that Indian-Americans are now the nation's richest ethnic group, with a median household income of $88,000 — nearly $40,000 higher than average. With whites clocking in at $67,000, the inevitable scramble to uncover how Indian-Americans function so successfully within a white-dominated system is in full swing. And more often than not, the discussion assumes the language of white supremacy.

Case in point is the term "model minority," which is applied to Indian- and other Asian-Americans to applaud their perceived exceptionalism. Besides implying some sort of deficiency in other minority groups, the term attributes success to inherent cultural traits, usually ignoring a slew of relevant factors.

The so-called "positive stereotypes" used to explain Indian-American prosperity boil down to a few qualities: emphasis on hard work, education and family — as if Latinos and black Americans lack such values. This perception not only ignores the persistent impact of segregation and poverty on other communities of color, it discounts how Indian immigrants are, on average, "better educated, more likely to have strong English language skills and arrive on employment-based visas, and ... less likely to live below the federal poverty line than the overall foreign-born population." Such benefits have an undeniable impact on their descendants' education and quality of life.

There's more: In terms of the Bee, the indignation around Indian-American dominance also hides that every winner since 2008 is a veteran of the North South Foundation, a non-profit that runs nationwide spelling contests and has become a breeding ground for winners. Ignoring this organization's role in predicting Scripps success not only discredits its potent formula, it reduces the achievements of those who go through it to racial traits.

So what's the takeaway? First, these Indian-American contestants are just as "American" as anyone else competing. Second, Indian-American success — in the Bee, and society in general — is not the result of inherent cultural characteristics, but a mix of factors, including some educational and financial advantages. Finally, the urge to attribute characteristics to race is a long-standing American tradition that's both limiting and destructive.

But by taking such a unique tone here, it's only further evidence that America is ill equipped to talk about minority success.