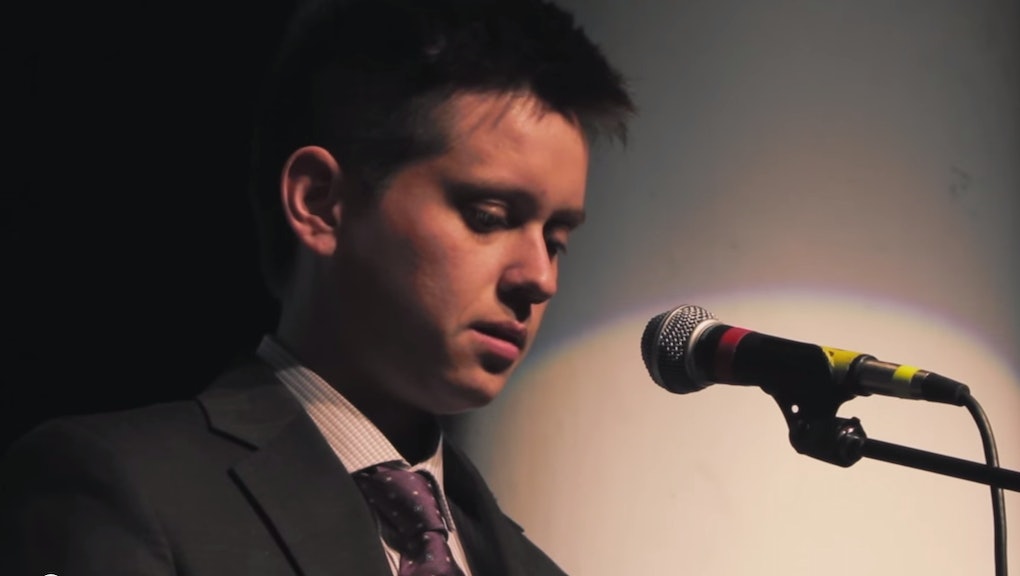 Once upon a time, Emily Smith wanted to be the first girl to play in the major leagues. She didn't let anyone tell her to wear shorts above her knees and she didn't care if boys thought her hair fell on her shoulders just right. But when she was 11, she developed suicidal feelings; she said it out loud that she didn't want to live anymore. She told her therapist that she did not foresee living past 21.

Today, Emily Smith is indeed no more. But the story of how Emily disappeared is more about redemption than loss. Because the death of Emily was also the birth of Ethan.

Ethan Walker Smith, a young performance poet who graduated from Boston's Berklee College of Music in May, told this powerful and beautiful story about the challenges of transitioning and killing an old identity in his poem "A Letter to the Girl I Used to Be." He performed the poem in the final stage of the College Union Poetry Slam Invitational, where his Berklee Slam Team was nominated for eight overall awards.

Smith's poem brought tears to the eyes of many in the audience, including himself, as he poignantly detailed the sometimes painful experiences and the always challenging process of becoming his true self.

"At 19, you started to fade," Smith said during the performance, speaking directly to his former identity. "I tried to cross you out like a line in my memoir I wished I could erase completely. And maybe I'm misunderstanding the definition of death, but even though parts of you exist, you are not here. Most of my friends have never heard your name, until now."

He also made a reference to the long and slow process of changing the physical self: "And I am sorry that this process is so slow, and all you can do is wonder if you ever had a place."

Smith's poem clearly struck a chord online, leading others to start sharing their stories as well. "I don't think I'll ever have to apologize to the 'girl' I used to be, but I certainly have felt as though I've let so many people down as a result of my transition, and I have felt like I need to apologize for myself as well," noted one Redditor. "I know my dad pictured one day walking me down the aisle. And my mom will never see any grandkids from me. I feel like there are so many 'milestones' that I'll just never reach as a result of my transition, and I've let myself and others down because they don't apply to me. This video makes me sad."

Grateful for the overhwelming support, Smith responded by starting an online resource list for LGBT individuals who need help. He posted this message on his Facebook page last week:

While there is sadness in the loss of Emily — the poem notes that she will never graduate or get married or have children — utimately, Smith's poem is a message of hope and strength for all those scared to admit who they truly are. As Smith notes in the poem, "I made the appointment to let a doctor remove your breast, so that I could stand up straighter."