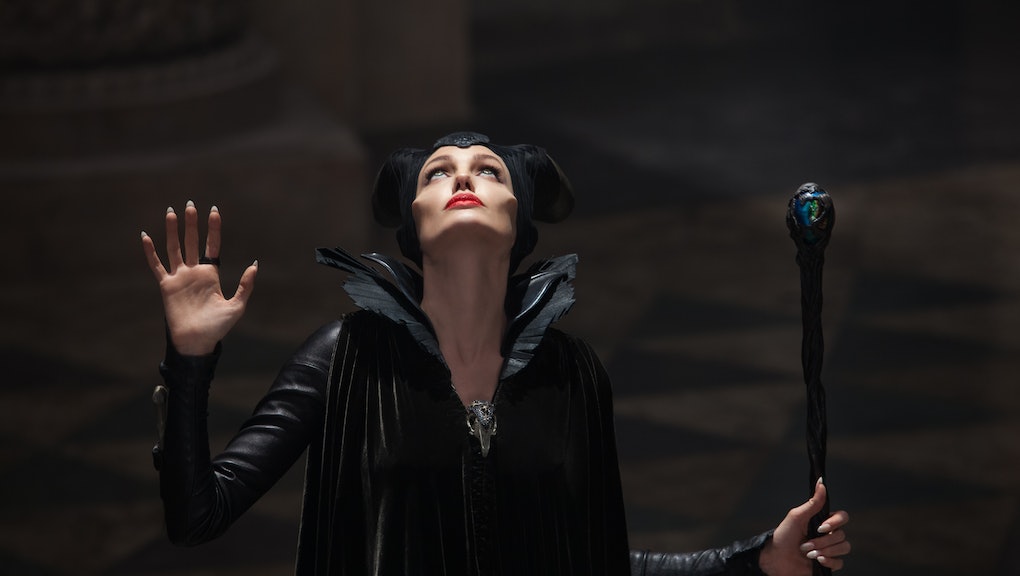 Frozen, for all its modern trappings, is a retelling of Hans Christian Andersen's tale "The Snow Queen." It took the ingredients and characters from the 19th century story, chewed them up, spat them out and made them into something modern, progressive and 21st century ready. Maleficent, by and large, follows this very same cinematic trend and seems to be following in the footsteps of financial success.

The plots to Frozen and Maleficent have clear and strong parallels. Both are based on fables, but retold to highlight the stories' powerful, magical women — women traditionally perceived as dangerous, but who through their 21st century reinvention become misunderstood heroes. They focus not on the obvious ingenues, but on the characters usually framed as villains. While both films, controversially, employ the same twist, a sign that the writers, while on the right path, need to branch out, their fairy tale reinventions say a lot about what movie audiences today want from their characters, especially female ones.

Traditional fairy tales focus on the fable's "good" characters' coming of age. "Sleeping Beauty" by Charles Perrault — the bones for Maleficent — or "Briar Rose" in the Grimm version both tell the story of the the princess' sexual awakening. Historically, the cinematic adaptations of these stories (Disney or otherwise) follow this same arc of awakening, casting characters in broad strokes of good and evil with the fable's narrative path always being a road to matrimony.

These fairy tales and their brethren typically include a showdown between two female characters. The beautiful young star versus the domineering mother figure — perhaps a stepmother, as in "Snow White" and "Cinderella," or some other older powerful woman in control of the protagonist, as in "The Snow Queen," "Rapunzel" and "Sleeping Beauty" — whom the young, virginal princesses must overcome and replace in order to become adults, a process which is only complete once they are married.

While the bones of these tales hold up and movie audiences seemingly never tire of them, the concepts today feel antiquated. This is one is one of the reasons why Frozen and Maleficent's modernizations feel so right.

Manohla Dargis at the New York Times breaks the entire concept down quite simply: "Consciously or not, coherently or not, Maleficent tells a new kind of story about how we live now, not once upon another time. And it does so by suggesting, among other things, that budding girls and older women are not natural foes, even if that’s what fairy tales, Hollywood and the world like to tell us."

Maleficent mends this fabled and tired rift between younger and older women. Although a man is the catalyst for Maleficent becoming the villain, the story's healing happens between the two female leads, much like the dynamic in Frozen. At the end of both films, instead of a showdown between the two women, there is reconciliation.

Some critics, like Lindy West of Jezebel, assert that Maleficent's writers failed to create an empowered, original character, instead relying on tired, overused storylines for women. "[Maleficent] deserves better than to drown in moldy feminine tropes — the sullied innocent, the abandoned lover lost without her man, the evil ex-girlfriend, the overreacting harpy, the broken woman redeemed by motherhood — even if she navigates them with grace," West writes. "All women deserve better."

While this criticism is fair, Maleficent, like Frozen, still represents an appreciated and overdue new trend for Hollywood's fairy tale women. No longer are we only making these stories about who is the fairest one of all; instead they are about understanding female relationships. With remakes of The Little Mermaid and Cinderella also in the works, it seems like these revisions will keep progressing and developing.

Maleficent is the next step in the Frozen revolution, which is still in its early days. Hopefully future films and other media will give us the fairy tales we want, complicated female characters and all.