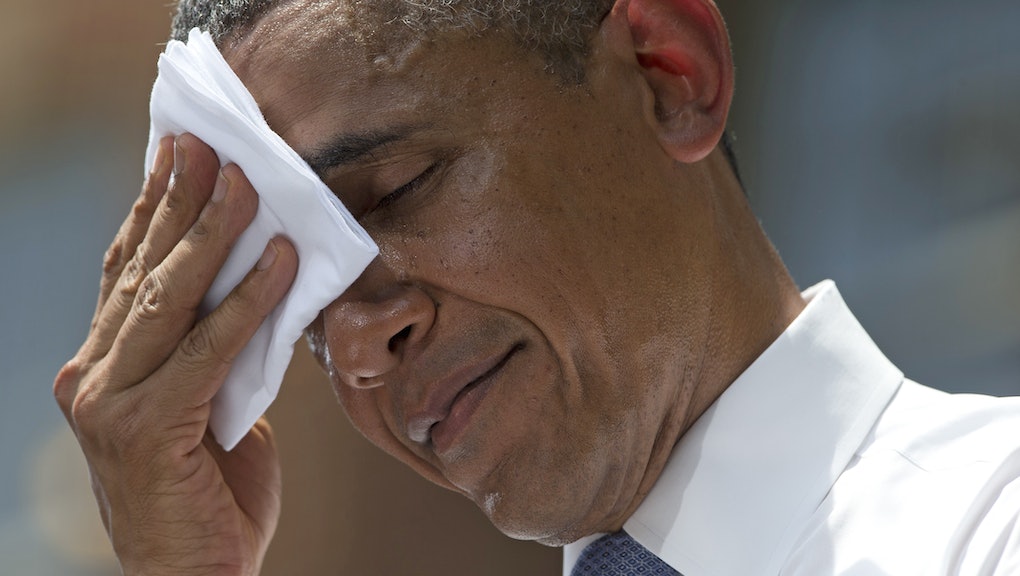 Obama Just Did What No Other President Before Him Has Done

It's about time. It was fun to pretend climate change wasn't a problem, wasn't it? Now it's time to face the elephant in the room.

On Monday, President Barack Obama did just that. In a new, major policy decision, Obama will bypass Congress with a plan forcing power plants to cut their emissions by 30% (from 2005 levels) over 15 years. Coal produced an estimated 74% of total CO2 emissions in the U.S. in 2012, compared to other forms of electricity generation like natural gas and petroleum. The plan represents one of the biggest actions taken by the U.S. government — and the biggest taken by any U.S. president — to slow climate change.

In two lines, here's what you need to know: "Nationwide, by 2030, this rule would achieve CO2 emission reductions from the power sector of approximately 30% from CO2 emission levels in 2005," the proposed regulation says. This new Obama Doctrine on climate change will, in essence, promote other forms of energy, including wind, solar and nuclear; it will also provide bargaining leverage in international talks when the U.S. asks other nations to curb their emissions (<cough> China <cough>).

Why is this important? Because this is happening:

According to two new studies, the collapse of much of the West Antarctic Ice Sheet may now be irreversible. A joint study by NASA and the University of California, Irvine revealed that losing these large chunks of the Western Antarctic Ice Sheet foreshadows a likely catastrophic 10-foot rise in global sea levels over the next few centuries. Progressive news outlet MotherJones called it a "holy shit" moment in climate change.

This is happening on the West Coast:

Snowpack in California mountains shrank by 86% in just one year. This is likely leading to increased drought and forest fires.

Obama's new EPA plan comes in the wake of a massive new study by the White House that is being hailed as the definitive report on the impact of carbon pollution in the U.S. It asserts that climate change is not just real — it's also creating catastrophe around the country.

That report, produced in early May, warned that water is growing scarcer in the driest regions of the U.S. and heavy rains are becoming more common in the wettest regions. Heat waves are now not only a regular occurrence, but are also more severe than ever. Floods and rising waters are impacting not only America's farmland, but also urban centers like Miami and New York City. Wildfires are growing worse. Forests are being consumed by insects that have seen a population boom in the warmer climate. Thunderstorms and hurricanes are more menacing. In March, the UN published an extensive report on rising sea levels and the increasing acidification of the oceans.

The EPA tweeted, "When it comes to climate change, most costly thing to do is to do nothing."

This could be the watershed moment for climate change. For years, the issue has been paid mostly lip service, reserved to political sound bites without much political action. Climate change has been important enough that for every year since 1995, world leaders have met at annual UN climate conferences to hash out ideas to curb carbon emissions. But few solutions have come into effect. Novel answers like cap and trade were trashed. The U.S. has the lowest emissions pledge of any developed country.

Meanwhile, the impacts of climate change have wreaked havoc on the country, a reality that has been met with a general meh by the American public.

PolicyMic's Tom McKay puts it in local perspective by outlining what climate change would mean for two cities you might be familiar with: New York City and Miami.

Florida: University of Miami professor and climate change expert Harold R. Wanless warns that ongoing construction in south Florida might be occurring in areas that will eventually be taken over by the ocean. NOAA's 2012 National Climate Assessment and Peter Harlem at Florida International University project a rise of 4.1-6.6 feet in sea levels (1-2 meters) by 2100, reaching 2 feet by 2050 and 3 feet by 2075.

New York: Future 100-year-flood zones for New York City are expected to be severe. By 2050, nearly a quarter of the city could be flooded during a disastrous storm, with 114,000 buildings, 800,000 residents and 97% of the city's power-generating capabilities compromised. A report issued in 2013 by the New York City Panel on Climate Change said that by the 2020s, annual temperatures for NYC will rise by two to three degrees on average and the number of summer heat waves could increase from two to three or four. In 2050, temperatures will rise an average of 4 to 6.5 degrees, and the number of days over 90 may double. Water levels at the southern Manhattan Battery will rise 11-24 inches, with 31 inches less likely but possible.

Of course, coal producing states and power companies won't take the news lying down. Conservatives cite that stronger EPA regulations would hammer the energy sector, hurt jobs in parts of the country dependent on coal and increase energy prices in poorer communities.

Editor's Note: This story has been updated to remove language that was used without attribution to Forbes. We apologize to our readers for this violation of our basic editorial standards. Mic has put in place new mechanisms, including plagiarism detection software, to ensure that this does not happen in the future.