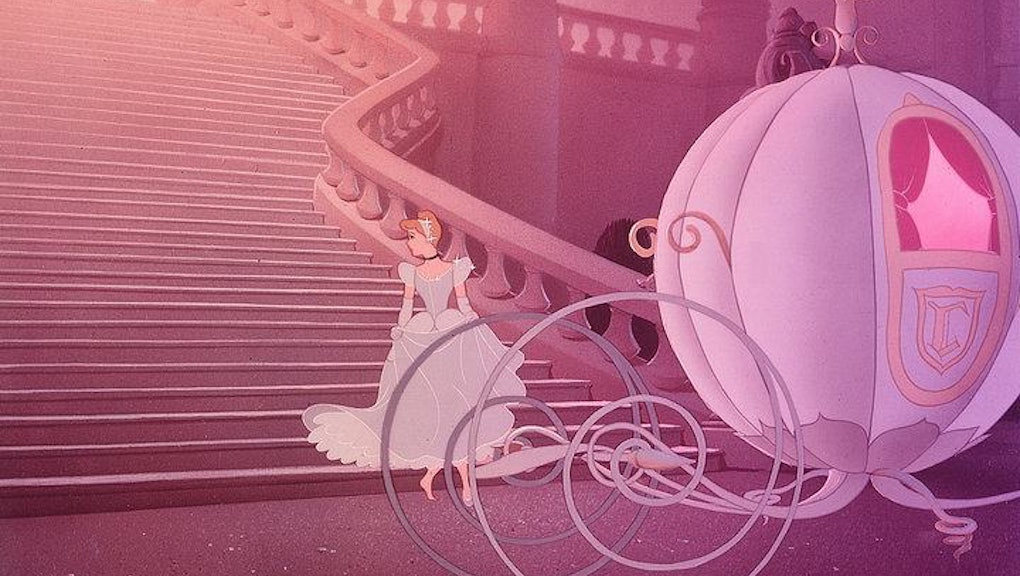 In French, she is Cendrillion; in German, Aschenputtel; and in Italian, Cenerentola.

You might know her better by her English name: Cinderella, a beautiful, blonde-haired, blue-eyed girl tormented by her vain and calculating stepfamily. She gets the ultimate revenge by winning the love of the royal prince, whom her stepsisters were scheming to marry.

Most of us know her story by heart: the midnight curfew, and the fairy godmother who doesn't step in until our heroine endures her scarring childhood and abandons her glass slipper, are part of the fable that has been retold and reimagined many times. These retellings include the gruesome Brothers Grimm version, Disney's well-known 1950's version and 1998's feminist Ever After, which stars Drew Barrymore.

But even though the famed tale is pieced together from its European versions, the core of the narrative — the story of a young girl who escapes unfortunate circumstances through chastity and patience, with some help from her magical friends — is actually found in countries and cultures throughout the world.

From China to Nigeria, each Cinderella story changes to reflect the local culture, customs and values. Some are old fables, and others are more modern adaptions of the well-known story. But they are united in their shared telling of the ultimate triumph of good over evil.

Here is how the story of Cinderella is told in nine countries and cultures around the world:

Like many versions from around the globe, Kao and the Golden Fish by Wilai Punpattanakul-Crouch and Cheryl Hamada includes the central elements of the Cinderella story: a young, hardworking girl bullied by her evil stepmother and stepsisters until she meets and falls in love with a prince.

However, in this Thai tale, the young girl's mother doesn't just die. She comes back in the form of a golden fish, an eggplant and a pair of trees that the girl talks to and finds comfort in during tough times.

Chinye: A West African Folk Tale by Obi Onyefulu is a Nigerian version that revolves around Chinye, a young girl who lives with her greedy stepmother and stepsister.

While this version does not include a glass shoe or a handsome prince, it does focus on the morals of prosperity for the honest, and peril for the greedy.

Chinye is sent into the dark forest by her stepmother to fetch water for the household. The young girl, who is terrified by predators lurking among the trees, meets a woman who tells her to visit a nearby hut and collect only the most modest of gourds. When she does as she is told, the gourd smashes open and riches pour out.

When her stepsister does the same, she ignores the woman's advice and faces the consequences.

Set in a Polish village, Raisel's Riddle is a Jewish retelling that focuses on a smart, motivated heroine and a hero (the rabbi's son) who is drawn to wisdom and virtue.

Raised by her poor but wise grandfather, Raisel grows up a strong, independent girl. After his passing, she finds work in the kitchen of a rabbi. On Purim, she gains three wishes and, after using them wisely, catches the eye of the rabbi's son. Unlike the classic Cinderella character, Raisel agrees to marry him only if he can answer her clever, thought-provoking riddle.

Rebecca Hickox retells the Iraqi folktale, "The Little Red Fish and the Clog of Gold," in The Golden Sandal, based on Inea Bushnaq's Arab folktales.

In this story, Maha, the daughter of a fisherman, bears the brunt of her stepmother's jealousies. She befriends a little red fish who helps her as she grows older. Instead of a ball, there is a wedding preparation where all the women gather for a henna ceremony. After the magical fish gives Maha a silk gown and golden sandals, she loses one of them in the river on her way home. Tariq, the brother of the bride, finds the sandal and asks his mother to try it on all the women around town to find his worthy bride.

The ancient Egyptian version of the story centers around a slave girl named Rhodopis, who was stolen away from her home in Greece. Instead of stepsisters, she is ill-treated by the Egyptian servant girls.

In this version, Rhodopis is given a pair of red dancing slippers from her master as she loves dancing, but she is unable to attend the pharoah's court. However, one of her slippers is taken from her by a falcon and dropped in the pharaoh's lap. The pharoah then vows to find the owner of the beautiful slippers and make her queen of Egypt.

This version of the story, first recorded in the first century B.C., is thought to be the oldest Cinderella story out there.

This version of the Cinderella story tells the the story of two sisters who approach the king's search for a wife differently.

While Manyara is more concerned with position and power, Nyasha is humble and kind-hearted. On their way to the city, Nyasha shares her food and gives gifts to the poor and hungry, while Manyara rushes by to meet the king. When they finally arrive, the king appears to the haughty sister in the form of a vicious monster, while Nyasha sees a small garden snake that transforms into the king. He eventually marries Nyasha, while Manyara is forced to become a servant in her sister's household.

This version is retold by Ai-Ling Louie in Yeh-Shen: A Cinderella story from China, and is based on a tale that dates back to the T'ang Dynasty, between 618 and 907 A.D. It is also said to be one of the oldest known version of the Cinderella story.

Yeh-Shen is a young girl who befriends and shares a handful of rice with a magical fish in a nearby pond. Even after her evil stepmother kills and eats the fish, he comes back to help her get ready for the local festival. The king finds the tiny, golden slipper that she lost and searches for its owner.

When Yeh-Shen tries to steal back the slipper, he catches her and her identity is eventually revealed. You can probably guess how the story ends!

Based on one of several folktales from Greece (another has the stepsisters eating their mother), in The Orphan by Anthony L. Manna and Soula Mitakidou, Cinderella is never referred to by name, but only as "Orphan."

The young girl becomes an orphan even though her father is still alive. According to the book, "As people say in Greece, 'A child becomes an ophan when she loses her mother.'"

Her stepmother is also said to be so hateful that "She counted every drop of water the orphan drank." After the orphan goes to her mother's grave for help, her mother tells her to go home and wait for "true fortune's blessings." Instead of a fairy godmother, Mother Nature showers the orphan with gifts including brilliance from the sun, beauty from the moon, gracefulness from the dawn and a pair of blue shoes from the sea.

After the prince notifies the village that he will be attending their church service, he catches a glimpse of the beautiful orphan. Struck by her beauty, he attends a second service and sets a trap of honey and wax around the entrance. While the orphan manages to escape, she leaves behind a shoe in the sticky mixture.

Perhaps one of the most recognizable versions of Cinderella, Charles Perrault's "Cendrillon" is closest to the Disney production that we all know and love. He first included the tale in a collection of stories published in 1697.

While most of the tale unfolds in the way most familiar to American audiences, this version ends much differently: After marrying the handsome prince, Cendrillon's stepsisters beg her forgiveness. The newly married princess forgives them and allows them to live a new life in the palace.

This article was originally published on June 3, 2014