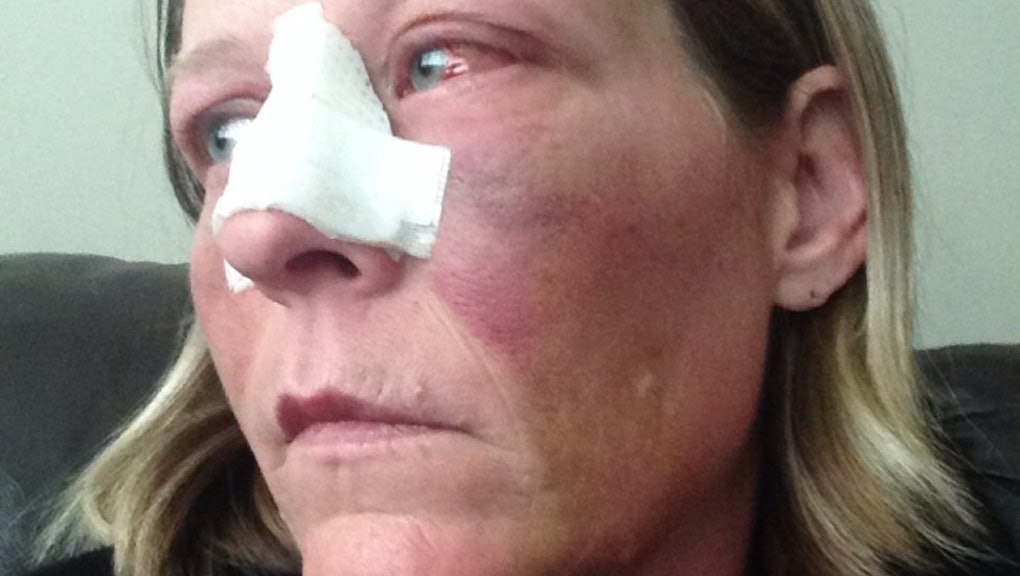 "Does this look like LOVE TO ANY ONE OF YOU?"

That was the rhetorical question Angela Bower posed to her friends and family after posting photos allegedly showing the brutal beating she took from her ex-partner.

The Tennessee woman said she took to her Facebook page not as a cry for help but instead in a brave attempt to raise awareness about the ugly reality that is domestic violence.

Last week, Brower underwent surgery in Memphis for injuries, including a crushed eye socket and broken nose, according to WREG.

"She is lucky to be alive," Brower's ex-husband Jason Brower told the station.

According to Angela Brower, she was attacked on May 18 by an ex-boyfriend, Walter Frank Bradley, who had arrived at her home, he said, to retrieve his belongings. The beating he eventually gave her, however, shattered the orbital bone around her eye. Her nose was also broken. She still has no feeling in the lower half of her face.

Brower has set up a GoFundMe page to help cover the medical costs.

Unfortunately, it wasn't the first time her ex abused her, as she revealed in an interview with the Huffington Post.

"I made a mistake, and I took him back, and everything was OK for a little while," Brower said. "If you have never been there, you can’t understand why people go back. Women follow their heart, they love them, they want to believe them when they say they will change, they lose their friends and family and don't feel like they have anyone."

Bradley is currently being held in the Tipton County Jail under $20,000 bail.

According to the National Network To End Domestic Violence, on average, three women are killed in domestic violence incidents in the U.S. every day; thousands die from their injuries — over 1,700 in 2011 alone.

Brower's home state of Tennessee ranks as one of the worst states in the nation when it comes to domestic violence, according to the Violence Policy Center's 2011 data survey released last year, with South Carolina ranked the worst.

Meanwhile, in January, the Tennessee Bureau of Investigation released its "Domestic Violence 2011-2013" study, which noted that incidents were most frequently reported in the context of boyfriend-girlfriend relationships, accounting for 43.2% of all domestic violence from 2011 to 2013.

"This kind of crime creates a real threat to our communities," TBI Director Mark Gwyn said at the time. "We hope this study gives law enforcement, policymakers and

In a time when male writers like Gavin McInness, who wrote a piece explaining to men when it's "OK to hit a woman," cloak their sexism under the guise of satire — "domestic violence selfies" like Brower's are unadulterated, unrepentant dissenting voices of truth. And just like the photos posted by Kentucky domestic violence victim Susann Stacy in January, or Amber Taylor in 2012, these photos are bearing shocking witness to a crime that for too long was swept under the rug.

"She finally came to the realization that it’s time for women to start standing up and not being scared," Jason Brower said.