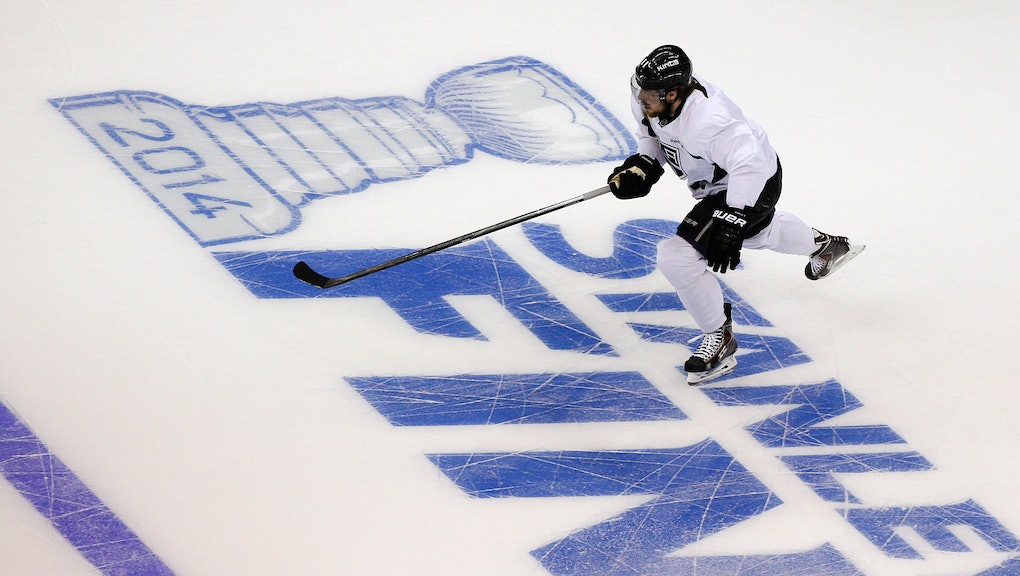 Can New York-Los Angeles be a Dream Matchup for Hockey?

New York vs. Los Angeles is Biggie vs. Pac, Kerouac vs. Bukowski, Gossip Girl vs. 90210. But the rivalry between America's two largest cities on the playing field has for years been dormant. No longer.

The Rangers and Kings meet Wednesday in Game 1 of the Stanley Cup finals (NBC, 7 p.m. ET), opening a best-of-seven series for hockey's top prize. It marks the eighth time the cities have met for a major championship, but the first in 33 years.

The atmosphere is electric in New York, where the cheapest tickets on the secondary market are running in the thousands for the three games at Madison Square Garden — more than it would cost to fly to across the country and watch Wednesday's series opener at Staples Center.

Los Angeles has never been mistaken as an NHL hotbed, but the Kings' recent success — including the team's first Stanley Cup in 2012 — have made it an unlikely hub for hockey's biggest games in recent years. Over the past three seasons, more playoff contests have been played in Los Angeles (27) than in Canada (26), the sport's birthplace and epicenter.

Television ratings for this postseason have been among the highest in 20 years, boosted no doubt by fortuitous matchups between major markets in the early rounds. More important, half of the 14 series have stretched the full seven-game distance, the most consistently important factor to viewership.

What could it mean for a championship series between the two biggest media markets of all?

Richard Deitsch, a Sports Illustrated writer who covers media, doesn't expect it to surpass the average of 5.76 million viewers generated by last year's finals between the Chicago Blackhawks and Boston Bruins. (As a comparison, the World Series averaged 14.9 million viewers.)

A matchup between New York and Chicago would have been more desirable for NBC, he notes, given the traditionally robust support for the Blackhawks, who came agonizingly close to a repeat finals appearance before falling to the Kings in Game 7 of the Western Conference finals.

"Chicago is an incredible television market for hockey, at the top with Buffalo and Minneapolis-St. Paul when it comes to percentage of homes watching the game," he says. "Game 7 drew a 22.7 rating in Chicago — 22.7 percent of all television-equipped households in the Chicago market were tuned in to the game at some point or another — which was a record for that market. By comparison, L.A. drew a 4.8 rating. So Chicago delivers for NBC in hockey because of the passion of the fans in the market. They crave hockey, and they tune in."

Yet despite the projected drop in ratings, the New York-Los Angeles matchup offers long-term benefits — and a "cool factor" — that cannot be ignored.

"Los Angeles offers the inevitable celebrity feel, which sports leagues want," Deitsch says. "The theory being that if famous people are into your sport, your sport must be cool. Hockey's ethos is a little different but what L.A. offers is a Western United States team doing well and that's important for the league in the long term."

"As a general rule, you want the major markets in your sports league to do well, especially if it's the two biggest markets by population in the country. Los Angeles is important for the NHL because the game needs to continue to grow in the west. The NHL's long-term survival nationally I believe has to include strong and healthy franchises west and southwest. This series is also good for the league because these are two media-centric markets who can deliver a lot of press on the sport."