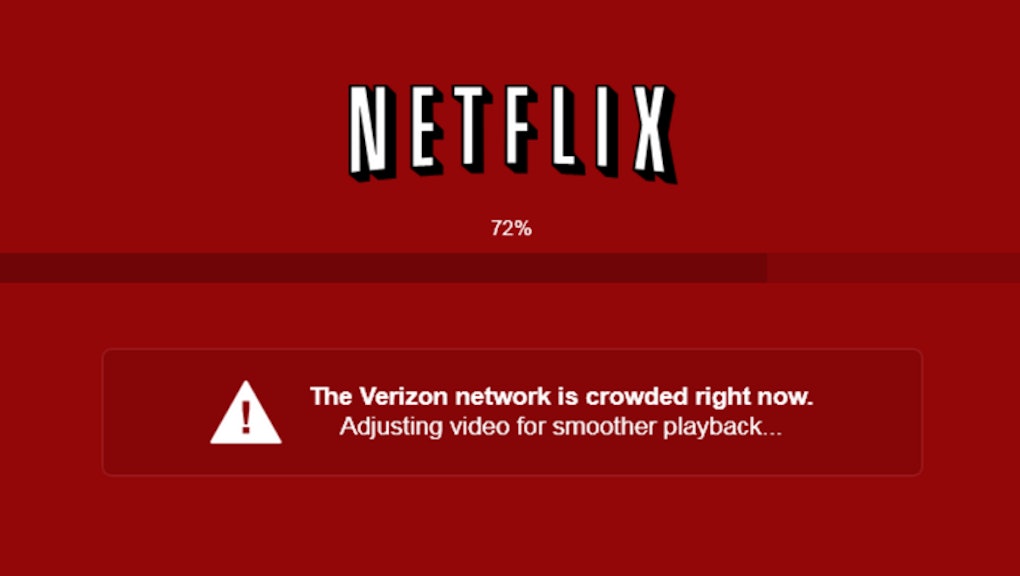 Here's Why You're Probably Seeing This Image On Your Netflix Account

Oh snap, indeed. Other users have seen similar messages appear while using AT&T service. The streaming-video company has apparently decided to one-up ISPs in its continuing struggle over paid peering arrangements by appealing directly to ISPs' customers. In Netflix's view, if your streaming service sucks, it's not their fault — it's Comcast, Verizon and Time Warner's.

The background: In the past few months, Netflix users saw streaming speeds degrade dramatically — then speed back up once Netflix reached paid peering deals with major Internet Service Providers in which the company paid undisclosed sums of cash in exchange for better connections to their users. Here's what that looks like:

AT&T, Verizon and Comcast service quality dropped as much as 24%, conveniently reaching a low right after a federal appeals court threw out the FCC's Open Internet rules.

Netflix is clearly not happy about this new arrangement, which requires it to pay presumably large amounts of money to ISPs to maintain regular service quality. Netflix essentially believes that ISPs are using their bottleneck position between content producers and consumers to extract unfair tolls, first from customers and then from content providers when they charge connection fees. (Some have even said the rapid drop in service quality could have been deliberate throttling designed to force Netflix into an unfavorable agreement.) Netflix has been advocating this position loudly since the beginning of the year, but now they're apparently building it into the app itself. The result could be a real PR hassle for ISPs.

Verizon isn't having it.

"The source of the problem is almost certainly NOT congestion in Verizon's network," Verizon said in a statement Wednesday. "Of course, Netflix is solely responsible for choosing how their traffic is routed into any ISP's network. It is sad that Netflix is willing to deliberately mislead its customers so they can be used as pawns in business negotiations and regulatory proceedings."

What does this have to do with net neutrality? A lot. But peering arrangements between major Internet companies and ISPs aren't quite the same as how ISPs treat information once it's on their network. The first is more of a business dispute, while the latter is more about consumer rights.

Peering arrangements specifically settle who is responsible for paying who for connection tolls when the intersections between ISPs and other networks become crowded or imbalanced. Net neutrality is about what happens when data is already on an ISP's network — for example, whether an ISP could throttle an end-user's Netflix connection to try and pressure them into signing up for the ISP's own streaming services.

But the two issues go hand in hand. Netflix believes that ISPs are abusing their bottleneck position while providing subpar service, and that strong open Internet regulations would prevent ISPs from gaming either end of their networks to extort customers and content companies. In the company's view, ISPs should be responsible for augmenting their networks to meet consumer demand — period. And Netflix commands much more customer love than any ISP in the country. In fact, the latter commands the worst customer service ratings of any industry.

Many tech experts agree that ISPs are essentially trying to pressure content providers like Netflix into extortionate peering deals. Level 3 Communications' Michael Mooney thinks this is essentially a shakedown:

Viewed in the light most favorable to these ISPs, they want content suppliers to pay not only for their own increased costs of supplying more robust Internet content, but also for any increased network costs of the ISPs too. This is not only unreasonable on its face, but it is entirely inconsistent with published reports indicating that returns on invested capital for ISPs are excellent, and are expected to improve even further, driving considerable additional growth in economic profits. More cynically, these ISPs simply view these arbitrary tolls as new sources of revenue for their last mile bottleneck monopolies or as a way to unfairly discriminate against content that competes with the content the ISPs themselves supply.... Some ISPs agree to augment capacity on reasonable terms.  But other ISPs try to strong arm the content providers into paying by playing a game of 'chicken' with the Internet. These ISPs break the Internet by refusing to increase the size of their networks unless their tolls are paid. These ISPs are placing a bet that because content providers have no other way to get their content to the ISPs' subscribers, that they will cave in and start paying them.

What's Netflix's end game here? Since the FCC has stated it doesn't consider peering arrangements part of net neutrality (and is wavering over proposed regulations that would give ISPs even more power over the traffic ontheir networks), it's unlikely that Netflix will end up getting all it wants no matter how many customers enlist in their public pressure campaign. But it could certainly get a much more equitable arrangement with ISPs if the latters' customers complain loudly enough.

And if the FCC does end up ditching the much-maligned paid-prioritization rules it's currently mulling, there's a small possibility sufficient customer outrage could fundamentally change the nature of peering arrangements as well.