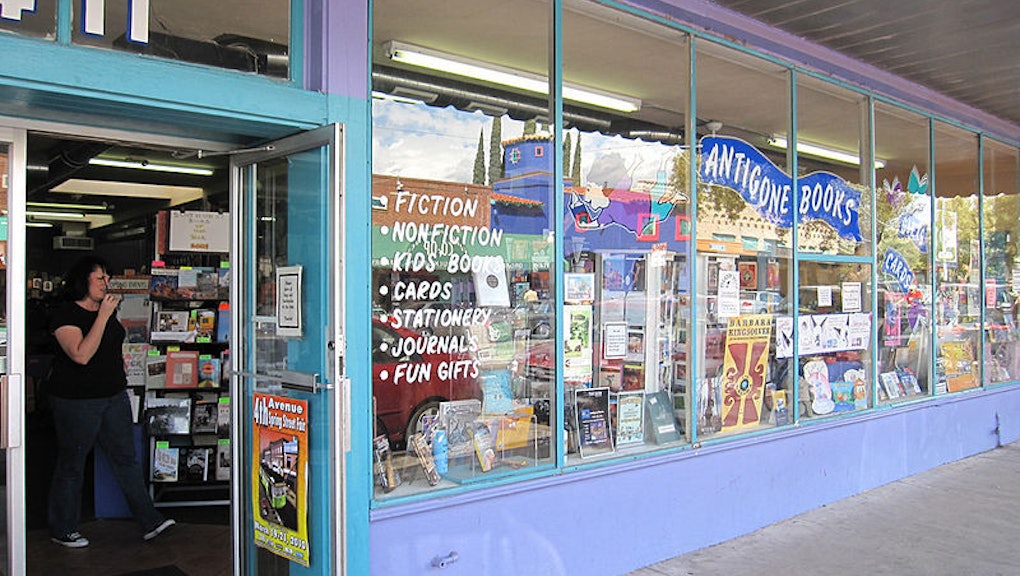 These Are the Last of America's Dying Feminist Bookstores

In the early 1970s, feminist bookstores began popping up across the United States as the feminist movement gained mainstream visibility. Established in response to the need for more women's spaces that supported feminist literature and encouraged radical political communities, the bookstores were invaluable gathering places for the nascent feminist community.

About twenty years ago, there were well over 100 self-described feminist bookstores in the United States. These shelves have been stocked with literature relating to a wide array of topics, including feminist history, LGBTQ issues, sexuality, abuse, community organizing, erotica, and gender and identity politics. This was not your neighborhood Barnes & Noble. However, that number has plummeted over the years, and as Anjali Enjeti noted recently in Paste Magazine, only around a dozen remain in North America.

While these shops used to fill a specific demand, the advent of the Internet, the Kindle and competitive pricing at major retailers has made such niche materials much more accessible.

So do we even need feminist bookstores anymore? While it's certainly become easier to buy  feminist materials elsewhere, many would argue that it is much harder to replicate the sense of community and solidarity once provided by these regional institutions.

PolicyMic caught up with the owners of some of America's last feminist bookstores still fighting to keep their doors open and shelves full. From New York to Arizona to Ohio, these brave proprietors expained to us exactly why it is they keep doing what they're doing, against increasingly difficult odds and the seemingly unstoppable foes of Amazon, eBay and Apple. Their message is clear: it is essential to preserve and support these types of spaces, perhaps now more than ever.

"Common Language Bookstore has two primary identities, feminist and LGBT, so we are familiar with marginalized populations," Keith Orr told PolicyMic. "We are located in Ann Arbor, Mich. Ann Arbor tends to be at least progressive. However, the state of Michigan is a great reason for the existence of a store like ours. Women have been under attack... Which brings me to the point of why we are so important. Feminism isn't just about fighting for equal pay or job protections. Feminism is about changing a male-centric culture on all fronts. The rape culture in Michigan asks the victim of a rape to proactively plan for the possibility of rape. Even in our other identity as an LGBT bookstore we fight this fight, as so much of politics and media attention on gay rights is centered on white male culture and privilege.

"Feminist, political and independent bookstores continue to be at the forefront of freedom of thought and freedom of the presses," Antigone Books' Kate Randall told PolicyMic. "What we are dedicated to is getting good books, important books into people's hands, keeping the interest there, and therefore keeping the publishers publishing with depth and breadth. If the written word becomes controlled by a few large corporations, which is the trend, important voices, many of them women's voices, will not be heard."

"Feminist bookstores are essential learning spaces for feminist movements, where everyone from emerging feminists to those who have been engaging in feminism for years can learn from the books on the shelves, as well as one another," Bluestockings' Janelle Kilmer told PolicyMic.

"Many feminist bookstores, including Bluestockings, host events where authors and readers can discuss components and trends in feminisms. Small bookstores also support small publishing houses, so that new authors have opportunities to publish their work. The remaining feminist bookstores are working very hard to make ends meet. We can only continue to provide spaces to further feminist movements with continued community support."

"Women from all of the world visit Provincetown, many making Womencrafts their first stop," Womancrafts' Michelle Axelson told PolicyMic. "People buy a year's worth of reading because we are the only brick and mortar store they can go to, to pick out lesbian fiction. Couples can buy romance, erotica, wedding and baby planning books, all of which validate their life experiences. Parents can buy books for their children that have images and stories that represent and include families like theirs. Being the place where parents feel safe to ask for help or children ask for resources to put in their parent's hands is a great privilege for us.

"Beyond that, our shop is filled with affirmative language, images, books and art that supports, educates and welcomes all. We cannot overstate the importance of bookstores as a physical and interpersonal space. The Internet has connected members of the LGBTQI community in ways that are lifesaving and innumerable, and we support people getting books however possible. However, nothing compares to the experience of walking into a shop where all the books are written by women, and that the queer and gender studies books are not relegated to a niche section hidden in the corner, but rather the entirety of the inventory."

"Supporting and preserving feminist bookstores is important because these stores provide a safe, community space for meeting, sharing and learning around feminist social justice issues," People Called Women's Gina Mercurio told PolicyMic. "The bookstores support women's organizations and projects, feminist activism, educational and cultural programming, and innovative thought and reflection on the multitude of socioeconomic, political issues affecting women's lives today. Where else does this exist within our patriarchal culture?"

"I believe Charis continues to exist because we see this purple house in Little Five Points as an essential incubator for stories, communities and movements," Charis Books' Elizabeth Anderson told PolicyMic. "While the Internet places more information than ever at our fingertips and creates virtual links, the popularity of gatherings at Charis demonstrates the need for human connection within community space.

"The feminist bookstore movement began with people gathering in living rooms and on porches and around kitchen tables, deciding that they not only wanted, but needed, to take back the means of cultural production — story, art, song, film — so that the narratives of their lives could be centered and celebrated. In this era of e-books and blogs, a feminist writer has more access to the means of production than ever before, but one need only glance at the New York Times bestseller list to see how far we haven't come in the mainstream.

"We are lucky to have this space in the heart of the U.S. South where we come together to center voices that would otherwise be silenced. But survival takes work. And truth-telling is work, which is why we call the writers and artists and activists who come through our doors and grace us with their gifts cultural workers. Their art is a kind of bloodletting, a looking into the sun when everyone else averts their eyes, a journeying to the other side and coming back to tell the tale so that we are all wiser for their troubles."

"Feminist bookstores have always provided so much more than books — they are havens of safe space, they are filled with resources, they are activist volcanoes," Wild Iris Books' Erica Rodriguez Merrell told PolicyMic. "The power of words and the belief that transformation is possible are the sparks that ignite feminists. Feminist bookstores naturally become the spaces that house the critical steps of activist organizing, activating, agitating. They become beautiful centers of change and empowerment.

"But just as important, feminism is about creating community free from systematic patriarchy. It means that we will take you in with no questions and no judgment. It means that your voice will be valued simply because it is valuable, because you are valuable. It means we will join in meals and dance together and listen to stories and poetry and admire art. It means we will always be here to insulate and fight for each other. It means we are family."