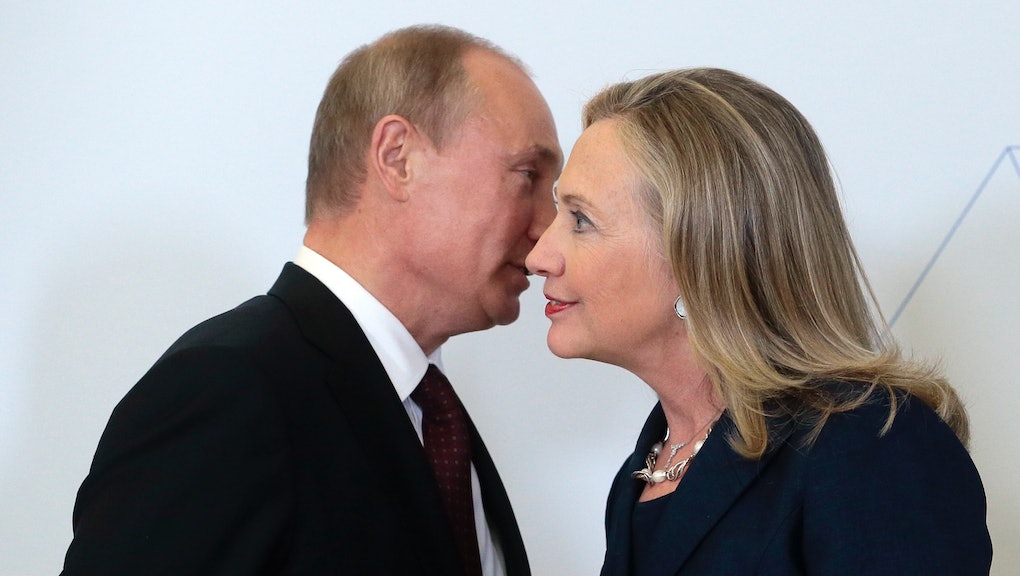 The news: Tough rhetoric is an inherent part of diplomacy, especially during times of political tension between two states. Russia and the U.S. have been trading barbs since the annexation of Crimea in February, and one could almost get desensitized to their threats and vitriol — until they cross a line.

On Wednesday, Russian President Vladimir Putin sat down for an interview with France's Radio Europe 1 and TV TF1, and addressed the ongoing war of words with the U.S. But when asked about former Secretary of State Hillary Clinton's recent criticism of Russian foreign policy, Putin chose not to focus on the diplomatic issue, but rather on Clinton's gender.

"It's better not to argue with women," Putin said in the interview. "When people push boundaries too far, it's not because they are strong, but because they are weak. But maybe weakness is not the worst quality for a woman."

The interviewer then tried to give Putin a chance to redeem himself, saying to the president, "Women must be respected, of course, and I'm sure you respect them."

A wasted opportunity: While Putin's comments can be dismissed as just another off-handed, sexist remark, they actually point to a deeper, underlying issue: Putin is looking to resort to meaningless personal attacks instead of engaging in political dialogue. After all, Clinton was brought up during the interview due to her recent, controversial remarks, where she drew parallels between the annexation of Crimea and the rise of Nazi Germany. Putin could have responded by criticizing the danger of Nazi comparisons, but instead chose to reduce Clinton to the role of a woman, not a diplomat.

The move is especially unfortunate given that Putin wasted a chance for meaningful conversation about Russia's take on American diplomacy. "Speaking of U.S. policy, it's clear that the United States is pursuing the most aggressive and toughest policy to defend their own interests — at least, this is how the American leaders see it — and they do it persistently," Putin said later in the interview.

"There are basically no Russian troops abroad while U.S. troops are everywhere. There are U.S. military bases everywhere around the world and they are always involved in the fates of other countries even though they are thousands of kilometers away from U.S. borders. So it is ironic that our U.S. partners accuse us of breaching some of these rules," he added.

And that's a perfectly valid point — one completely eclipsed by Putin's earlier sexist remarks. If he hadn't treated Clinton like a hysterical woman, but rather a former diplomat making a controversial remark, his criticism of the U.S. could land with more power. But as is, he just comes across as just another condescending man.