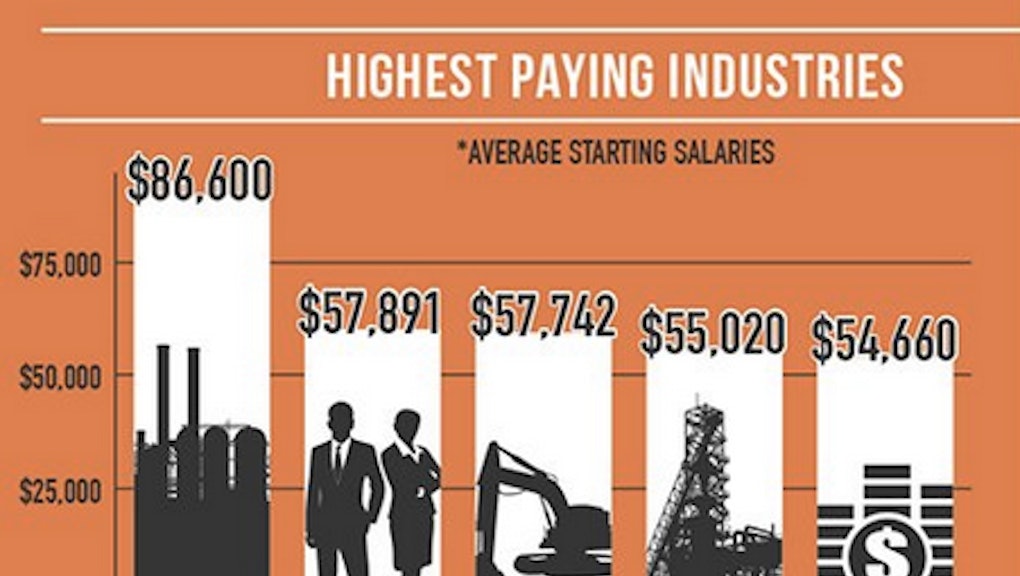 One Chart Shows if You Chose the Right Major in College

The news: H&R Block looked into college majors, starter jobs, locations and the state of industries to examine how relevant a person's major might be to the eventual size of their wallet.

The results are pretty subjective. Even if it's profitable, not everyone wants to go into the business, STEM or medical fields — and really, it's not huge news that engineers, techies, business professionals and medical personnel are in demand and make good money. But the chart does underscore the incontestable fact that STEM professions are still a very good bet for a college student looking to get a good job right out of school.

The worst majors: Commercial artists and graphic designers do particularly poorly, with 7.5% of experienced grads unemployed. So too are fine artists, photographers and videographers. In fact, the photo/video majors see an astonishing 12.9% unemployment rate out of college. But for many of the maligned majors, experienced grads end up doing better than the national unemployment rate of somewhere around 6.3%.

Top occupations for recent grads are a mish-mash, with nurses, sales reps, engineers, computer specialists and health professionals leading (as well as retail salespeople — yikes.) Average starting wages are highest in mining and energy extraction, with managers, construction, engineering and finance/insurance following behind. In aggregate terms, the top industry growth industries are advertising followed by computer software and accounting or finance.

More background: The highest average starting salaries are in various kinds of engineering. Petroleum engineers are the only people who can claim a starting salary close to $100,000, while management information systems and logistics or materials management professionals (both technical jobs) come in around $60,000.

The most successful grads are in technical fields, something President Obama underscored in February when he said, "A lot of young people no longer see the trades and skilled manufacturing as a viable career, but I promise you, folks can make a lot more potentially with skilled manufacturing or the trades than they might with an art history degree."

Majors That Pay You Back

But while tech and engineering jobs are hot right now and will continue to be for the foreseeable future, that's because they demand a specific, hard-to-learn skillset. So it's not a golden ticket. Not everyone has an interest in being an engineer, and the jobs pay well specifically because they are challenging and selective.

Why you should care: For one, going into a liberal arts field is simply less likely to pay as much money as a tech job. So it may not make sense for a college grad to spend huge amounts of money on a liberal arts degree unless they're attending a selective institution with good job placement rates.

That said, even crippling student debt rates can't kill the value of a college education. Americans with four-year college degrees made on average 98% more an hour than those who didn't in 2013, "up from 89% five years earlier, 85% a decade earlier and 64% in the early 1980s." While some of this reflects the fact that the less-educated are doing comparatively poorly in the economy compared to decades past, it's still clearly worth it to go to college.

In fact, while America does have serious issues with the cost and acccessibility of college, moving forward it will need more trained, college-prepped professionals. And the clear economic advantage of pretty much any four-year college degree still makes it well worth it. As the New York Times's David Leonhart writes:

When experts and journalists spend so much time talking about the limitations of education, they almost certainly are discouraging some teenagers from going to college and some adults from going back to earn degrees. (Those same experts and journalists are sending their own children to college and often obsessing over which one.) The decision not to attend college for fear that it's a bad deal is among the most economically irrational decisions anybody could make in 2014.The much-discussed cost of college doesn't change this fact. According to a paper by [David] Autor published Thursday in the journal Science, the true cost of a college degree is about negative $500,000. That's right: Over the long run, college is cheaper than free. Not going to college will cost you about half a million dollars.