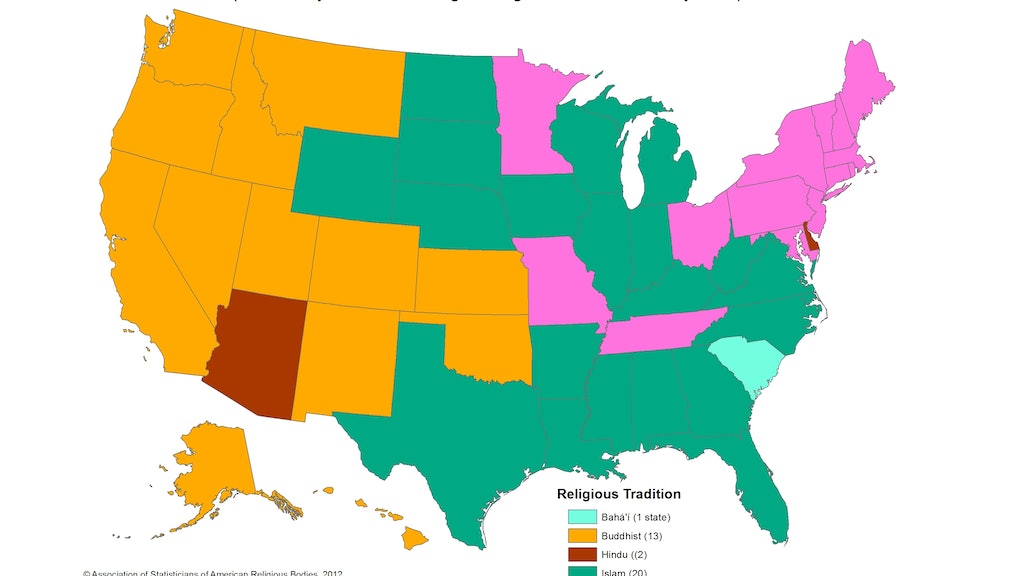 The Most Common Religion in Your State, Besides Christianity

Figuring out each state’s largest religion is easy; more than three-quarters of Americans identify as Christians. But, make it second-largest and the results get interesting.

The Association of Statisticians of American Religious Bodies, which sponsors the U.S. Religious Census every 10 years, mapped out data on religious popularity. Knowing that Christianity was the leader in every state, ASARB highlighted each state’s second-most popular faith.

What sets South Carolina apart? The Baha’i faith sprung up there in the 1970s, especially among African Americans. Between 8,000 and 10,000 residents joined the religion during those years.

“The majority of Baha’is in South Carolina are of African descent,” said Windi Burgess, a Baha’i living in Myrtle Beach. “In the 1970s there was a lot of outreach to share the faith.”

The outreach didn’t stop then, U.S. Baha’i spokeswoman Rachel Wolfe said. The Palmetto State has a “very robust community,” including well-attended Junior Youth programs for children between the ages of 12 and 15. “They’re basically a peer group to help each other through the tumultuous time that is middle school and do a lot of community service,” she said. “There are some areas that really grab hold of those activities.”

Not all children in the programs are Baha’i, Wolfe said, but many end up getting to know the teachings and converting.

In total, more than half of Americans identify as Protestants, while 24% call themselves Catholics. Mormonism and Judaism each have 1.7%, while Buddhism, Islam and Hinduism come in at under 1%.

There are only 175,000 Baha’is in the U.S., but Burgess said the community in her home state still feels large. “There’s an openness here,” she said. “There’s this unique spirit in South Carolina.”