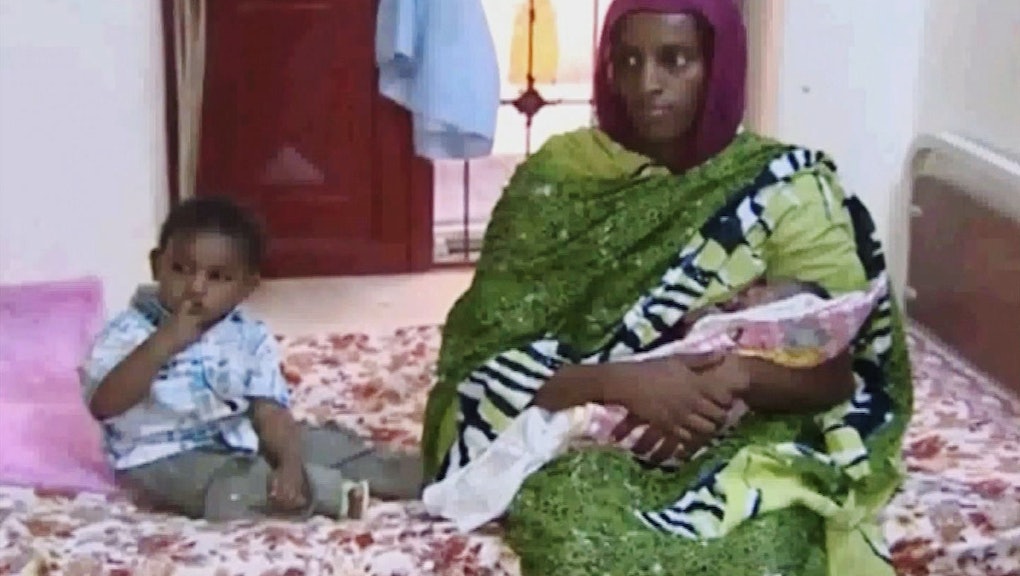 What We're Getting Wrong About the Sudan's Infamous Apostasy Case

Once again it seems Islam is in the middle of another contentious matter. A Christian mother of two, found guilty of apostasy, was sentenced to death in a Muslim country.

At least that's the narrative you might believe if you've been piecing together the tragic story of Meriam Yahya Ibrahim, a Sudanese woman facing possible death after being accused of apostasy. Her case has incited a slew of the tweets featuring the #SaveMeriam hash tag, and online petitions that have garnerned hundreds of thousands of signatures.

Of course, the charges faced by Ibrahim are no light matter. But there's a deeper issue at play here. The Sudanese regime, led by Omar Al-Bashir, is known for its underhanded tactics and dirty dealings. In April, right before Ibrahim's case came to light, the office of Khartoum's governor was facing accusations of widespread corruption. Perhaps that is no coincidence.

Leading a disgruntled nation that has seen popular protests in recent years, Bashir's regime is no stranger to diverting attention from the country's long list of troubles — unemployment, rising costs of living and the depreciation of the Sudanese pound, to name a few — by fixating on politics.

In January, for example, amid widespread reports of internal party splits, Bashir announced reconciliation talks with the opposition, of which the Umma Party, one of the largest political parties in the country, was a part. In early May, the leader of the Umma Party, El-Saddiq El-Mahdi, was arrested on charges of "defamation" after he accused paramilitary forces, the Rapid Support Forces, of abuses including rape and murder in the conflict-ridden Darfur state. The National Dialogue initiative is now left in tatters. Right now, all eyes are on Ibrahim's case.

Ibrahim's case has, most certainly, sparked a discussion within Sudan. As any political strategist will tell you, any story that combines "defining values" and religion will lead to a polarizing national debate.

Image Credit: AP. Meriam Ibrahim with her newborn daughter. Ibrahim gave birth to the child while her feet were in chains.

And what dominates the national conversation in Sudan has a thing or two do with the government: After all, Bashir's regime keeps the media on a short leash. He goes to great lengths to muzzle any independent publications, including confiscating issues of newspapers from printing presses, a tactic that uses economic pressure to silence dissent.

While the motives behind pursuing Ibrahim's case are unclear, there are lessons to draw from the victim of the country's last death verdict for apostasy in 1985, which was politically motivated.

Mahmoud Mohammed Taha, a religious Sufi thinker and leader of the now-disbanded Republican Brotherhood party, was hanged for "sedition and apostasy" for vocally opposing the imposition of Sharia law in Sudan, a change for which the country's president at the time, Jaafar al-Nimeiri, strongly advocated.

Unlike Taha, Ibrahim is not a political threat to the government. She is, however, political fodder. Just as Taha's death was Nimeri's way of flexing his political muscles, Ibrahim's case could very well be nothing more than a tactic to further promote the ruling National Congress Party's (NCP) political ideology and agenda, which he achieved through the "Islamization" of society.

It's a debate from which the ruling party stands to gain politically, whether that involves using it to flex a muscle over the country's more left-leaning and secular opponents, including the country's popular youth movement, or creating a debate designed to pit Sudan's religious conservatives against more secular segments of society. Either of these scenarios are carefully constructed attempts to deflect attention away from the ruling party's catalogue of failures and troubles.

A report did surface saying that Ibrahim was to be freed, after a presidential pardon. But SUNA, the state-run news agency, said that overturning a verdict can only be done by the court, and that was dependent on the outcome of the appeal.

If the aim of this case is an elaborate game of political chess for Bashir's government in order to further their own agenda, it's the topic of the year in Sudan, and Ibrahim is the sacrificial pawn. All other matters — the failing economy, the rising inflation, the continuing bombings of civilians in the Nuba Mountains, the spiralling crises in Darfur, the student protests, etc. — have taken the back seat as many continue to discuss and dissect the case that undoubtedly will be dragged out for a while, or until another "issue" pops up and dominates.