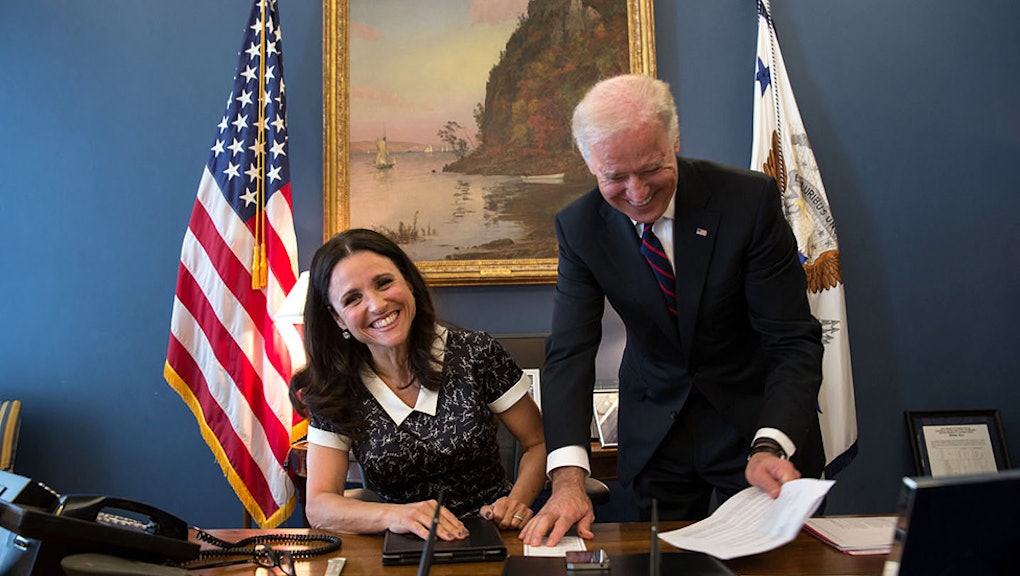 Believe it or not, HBO has shows other than Game of Thrones. The political satire Veep aired its third season finale Sunday night, and it received generally positive reviews. As the show moves into its fourth season, one might be wondering why this little-known comedy is such a hit with fans.

Veep's success has been attributed to its biting one-liners, fearless use of "creative language" and honest portrayals of women attempting to navigate their way through politics. But even more than this, Veep strikes home with anyone who is at least passingly familiar with American politics. The show's increasingly large fan base and critical acclaim might be due to its clear-headed portrayal of America's political process.

Here are eight things the show gets right:

Let's face it. When you put people in positions of power, they become used to that power and feel that others are mere tools for ascendancy. From her secretary up to the vice president herself, pretty much everyone on the show is a jerk — or is being attacked by a jerk.

Remember: People in Washington not only have power, but they actively seek it. They are not good people. Veep realizes that.

2. To get ahead, one must be opportunistic.

They don't call it a rat race for nothing. Washington is crammed with people scrambling for power, and moving forward and getting ahead are the first things on their minds. While perhaps not everyone has Dan's audacity to date a woman because her mother can advance your career and then ditch both for a rising star, real-world Washington is not that much different.

In the midst of having a conversation, most people in Washington are also scanning the room to see if there is someone better — who can advance their career — to talk to.

3. But that doesn’t mean the opportunism is fun.

In order to get money and support, much of the vice president and her staff's time is spent sucking up and trying to get into the good graces of the people they hate, attending boring parties and attempting to please people they would rather stab in the face.

Make no mistake: Politics at the best of times is a dirty game, and even politicians with the best intentions must get into bed with people that they revile.

Vice President Selina Meyer talks a good game about her "clean jobs" campaign and other initiatives, but most of her and her team's efforts are aimed at making her look good, rather than communicating how she can effect the most change.

While of course a female vice president would be subjected to more pressure to maintain a perfect appearance, such judgements are reflective of Washington as a whole. Appearing to solve problems is often much more important than actually solving them.

5. Politicians are people, too.

By revealing characters' flaws more so than their virtues, Veep shows what many people don't always understand about Washington: The people there are people. This is true despite whatever media and appearance machinations might go down.

And, just like all people, they can be corrupted, manipulated and subjected to the poisons of power.

6. The media can make or break you.

When Meyer's staff isn't attempting to smooth over problems, they are furiously attempting to fix a blunder she or someone else has made in the media. Appearance is vital largely because politicians great and small are under the microscope of journalists and other popular media (as they should be).

Though the media serves as an important transparency tool for the government, the solution from politicians has been to hire damage teams, rather than being genuinely open with the public.

7. It doesn’t matter who or which party is in office.

Much of Veep's brilliance comes from the fact that it is not clear which party is in office. The deep truth of the matter is that politicians are power-seeking, controlling, vain and self-serving — no matter what party they're affiliated with.

While many enter with noble intentions, in the end, politics is a self-interested game, and voting for either the red people or the blue ones makes little difference in their true nature.

The vice president's daughter, Catherine, may very well be the satirical stand-in for all the people who are hurt by Washington's machinations. Catherine, who genuinely needs and desires her mother's attention, is constantly pushed aside by Meyer's selfish preoccupation with image, the media and her own power. So, too, are American citizens thrown under the bus by most, if not all, of government's actions.

Veep understands how politics works. The people in the nation's capital are there for one reason only: to serve their own interests. In order to climb the tall tower of political power, they will do and say most anything, are obsessed with their own image and care more about their own career aspirations than the people they claim need them.