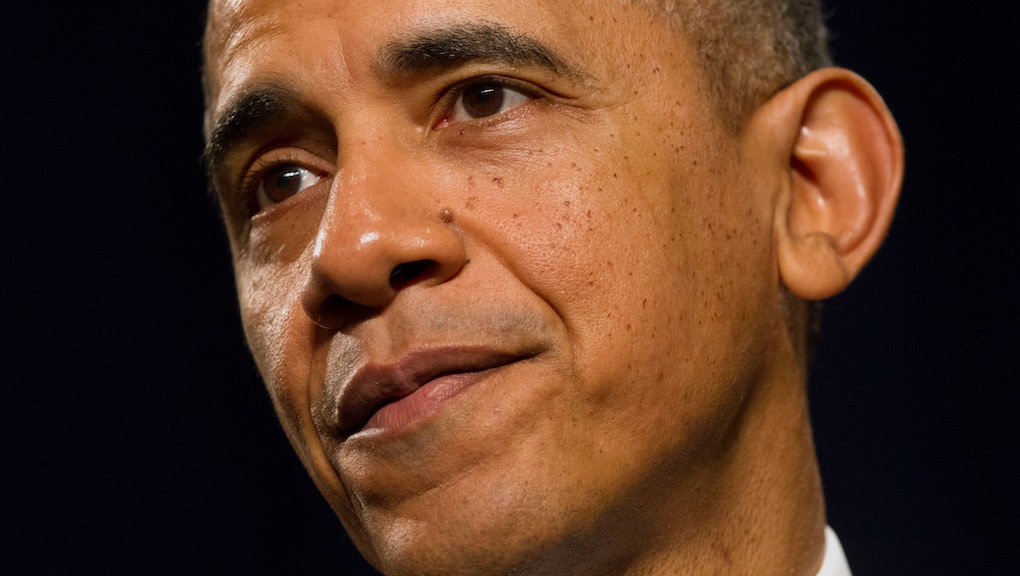 Obama Just Did What Congress Hasn't Had the Guts to Do

It's an issue that impacts millions of Americans, and research shows it is likely severely hurting the U.S. economy — yet Congress has failed to fully address the issue of crippling student loans.

Now President Obama is taking matters into his own hands. On Monday, the president announced that he was using executive action to help ease students' burden of paying student loans. The plan would put a cap on these loan payments for an estimated five million graduates at 10% of their monthly income. It's not exactly a cure-all, but it's a start. But more importantly, Obama is sending a message that he will 100% bypass a gridlocked Congress on this issue to work towards a solution to a student loan problem quickly ballooning out of control.

The plan expands on a 2010 "Pay As You Earn" law that sought to curb skyrocketing loan payments. The new presidential memorandum will also include forgiveness programs for on-time payments and a foregiveness program for public-sector employees after 10 years. Low-income borrowers can have their balance canceled after 20 or 25 years of on-time payments.

This solution couldn't have come soon enough. The average student who graduates with outstanding loans is $29,400 in debt. Student loan debts comprise 6% of the overall national debt.

The federal government made a profit of — wait for it — $41.3 billion off student loans for the fiscal year of 2013. That's good for the third highest profit in the nation, behind just Exxon Mobile (which made $44.9 billion) and Apple (which made $41.7 billion).

Meanwhile, student loan debt has surpassed all other forms of non-housing debt.

Then there's this gem: The New York Times reports that debt might be a major reason why the number of 27- to 30-year-olds taking out home mortgages has plummeted in the past decade. The ripple effects are already starting in the economy.

Economists have said outstanding student loan debt is burdening the economy, limiting graduates' ability to buy cars, take out mortgages and spend money to spur wider growth. This isn't a short-term problem: Student debt sticks with a person for decades, and could have a real impact on the long-term growth of the economy. Even bankruptcy doesn't usually release students from their debt, which is nearly impossible to shrug off even in the most dire circumstances.

It took months of bickering and partisan gridlock, but last year Congress was finally able to build a deal to retroactively lower the interest rates. This came after rates doubled when legislators couldn't agree on a solution before a deadline passed and the law keeping interest rates low expired, spiking rates. Interest rates are now tied to the market and will fluctuate from year to year, rather than having fixed rates.

Most recently, Sen. Elizabeth Warren (D-Mass.) in May introduced a bill that would allow borrowers to refinance their federal or private student loans, allowing more flexibility in paying. True to the gridlock narrative, Republicans are hugely against the bill because it relies on raising taxes for millionaires.

The federal government is the sole provider of student loans, and it is fully in their power to fix the problem. Under the Student Aid and Fiscal Responsibility Act in 2010 income-based repayment plan, the maximum monthly payment plan was moved from 15% of income to 10%, starting in July. Obama's executive action eliminates that waiting period so borrowers can take advantage of lower payments sooner.

In 2013 alone, students borrowed around $106 billion. National student debt has grown from $300 billion in 2003 to $1.1 trillion today. Because of loans, fewer college graduates are "[entering] the 'grown-up' economy" — i.e., buying houses and cars and filling them with pricey consumer products. This ripple effect is one that the government is smart to correct.

Some analysts wonder how much money Obama's plan will actually save those who have outstanding student debt (pointing to just $10 a month in savings), and that there are some deep-rooted issues with the policy proposal. The Obama doctrine on student loans is by no means a plan that will completely erase student debt. It likely will only blunt the upward trajectory of debt, not change the course of the overall trend. But it's a start, and one that shows that Obama is serious about this problem, especially while Congress nitpicks this very serious issues.

Editor's Note: This story has been updated to remove language that was used without attribution to CBS News and Forbes. We apologize to our readers for this violation of our basic editorial standards. Mic has put in place new mechanisms, including plagiarism detection software, to ensure that this does not happen in the future.