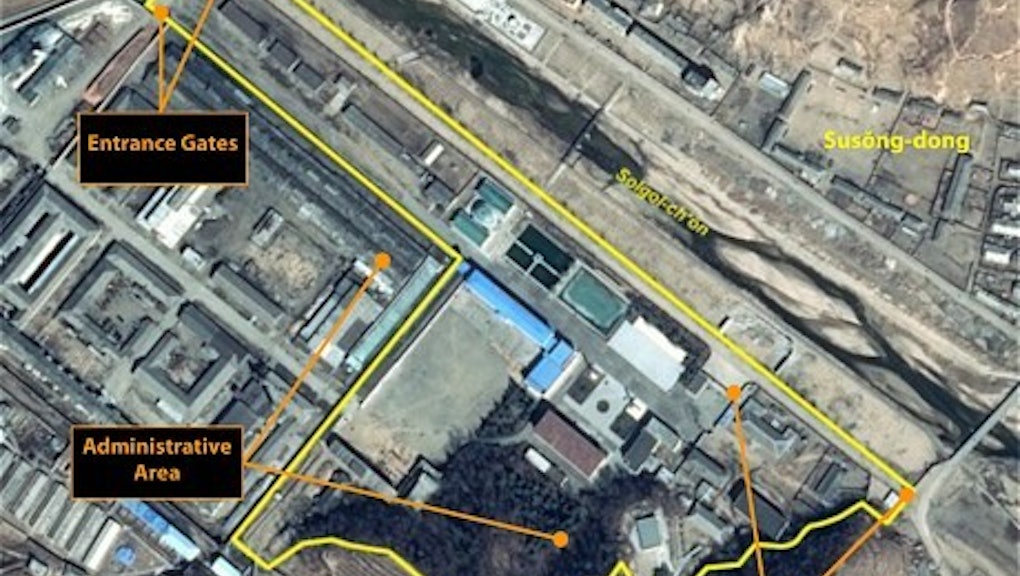 What Life Is Like in a North Korean Prison Camp, According to Satellites and Survivors

The photos: Entrance gates and a large administrative area form the outer perimeter of the camp. Here is where camp staff who are not directly involved in overseeing inmates perform many of their day-to-day duties.

Camp 25 appears to hold approximately 75 acres of cultivated farmland, hosting grain crops, orchards and greenhouses. It also produces poultry and poultry products. According to the HRNK, access to time-lapse images showed work taking place to expand operations over the past year. Also pictured are light industrial facilities producing wood products and other goods.

Terraced farming plots can be clearly seen below the camp and outside the main walls.

According to the HRNK, these photos show that the growth of the camp has displaced part of two cemeteries used to bury dead prisoners. Now, they claim that Camp 25 is disposing of its excess corpses in a crematorium.

Finally, the camp is linked with the broader regional air defense network, hosting a battery of medium anti-aircraft emplacements. They are likely positioned to defend the nearby capitol city rather than the prison camp itself.

More background: A UN report on human rights abuses in North Korean prisons was nearly 400 pages of damning accounts of "crimes of 'extermination,' murder, enslavement, torture, rape and persecution on grounds of race, religion and gender." Former prisoner Kim Kwang-il enlisted an illustrator to document conditions in the camp, and the sketches are horrifying and haunting.

Prisoners were made to hold excruciating poses for extended periods of time:

As well as undergo pigeon torture, described as:

"Your hands are handcuffed behind your back. And then they hang you so you would not be able to stand or sit" for up to three days. "There are no people watching you. There is nobody. And you can't stand, you can't sleep. If you are hung like that for three days, four days, you urinate, you defecate, you are totally dehydrated. … [the pigeon torture] was the most painful of all tortures … [it] was so painful that I felt it was better to die."

Prisoners who fainted during interrogations were accused of faking it and the torture would begin anew. Many starved, hunting rodents and snakes to feed their children. Bodies would be left to rot.

Prisoners in solitary confinement were thrown into tiny cages and starved.

This is really happening? To the best of our knowledge, yes. Some of the practices may be exaggerated or drummed up for political gain by South Korean politicians or Westerners calling for regime change, but it would require a near-total denial of the evidence (including testimonies by camp survivors) to ignore the fact that the hermit kingdom runs an array of labor and concentration camps that, in practice, are death camps.

The UN has concluded that North Korea's camp system constitutes crimes against humanity.

"Because we saw so many people die, we became so used to it," one camp survivor told the UN. "I'm sorry to say that we became so used to it that we didn't feel anything. In North Korea, sometimes people on the verge of dying would ask for something to eat. Or when somebody died we would strip them naked and we would wear the clothes. Those alive have to go on, those dead, I'm sorry, but they're dead."