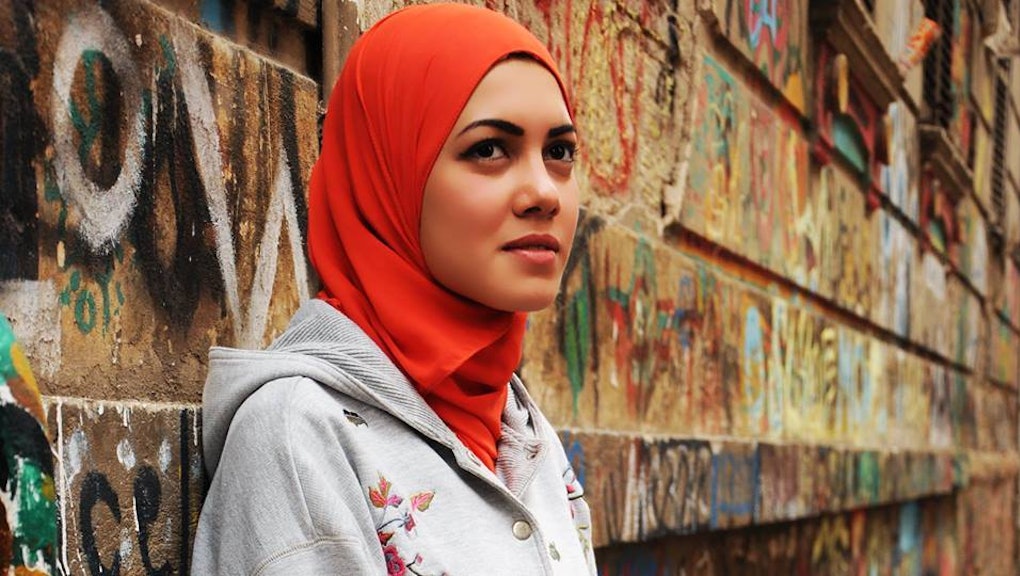 "I realized all the male rappers must have a track in which they talk about girls and their clothes, blaming girls for everything happening around us," said 19-year-old Mayam Mahmoud, an Egyptian rapper. "That wasn't right. So I rapped about girls and the problems they face."

Mahmoud, who rose to fame after competing on Arabs Got Talent, is using her music to hit back at Egypt's troubles with sexual harassment.

"You catcall and harass, thinking this is right," Mahmoud raps in one of her songs. "Even if these are just words, this is not how you treat [women], you're throwing stones."

She's part of a wider group of young people and activists who have been using art to speak out against the country's endemic problems with sexual harassment.

Image Credit: AP. A mural against sexual harassment in Cairo, that says "no harassment" in Arabic.

Just on Sunday night, Egypt's Tahrir Square saw a horrifying sexual assault, where a woman was seized by a crowd celebrating the inauguration of former military general Abdel-Fattah al-Sisi as president. The brutal moment was caught in a short, two-minute video, where the university student was undressed and assaulted by men in the crowd.

Egypt's government has criminalized sexual harassment recently, and seven people have now been arrested for the attack. But some rights groups estimated nine attacks in total that night.

According to blogger Fatima Said, the new law runs the risk of being mostly a hollow gesture, since the government usually allows these attacks to go unpunished. She also argues that as long as the country's current government — which came to power through a military coup that toppled now-jailed president Mohamed Morsi last June — is still in place, the hopes for concrete action on this problem are slim:

"The state simply does not care about women's rights. It is happy to exploit them for photo opportunities and use them as tokens to advance their own political agendas, but as long as the malfeasant authorities continue to operate through a corrupt framework, no law will bring about any difference, and as long as society continues to blame and shame the victim instead of the perpetrator, nothing will change. For now, the anti-sexual harassment law is nothing more than ink on paper."

Image Credit: AP. A protester against sexual harassment holds up a sign that says "No!" during a demonstration in Cairo.

Some supporters of the military general (who won in an election that was not "genuinely democratic," according to international observers) have been dismissive of the reported assaults. During a report showing the jubilant crowds in Cairo's Tahrir Square, Tahrir TV anchorwoman Maha Bahnasy sparked outrage after making light of the attacks, saying, "Well, they are happy. The people are having fun."

According to a statement released by a coalition of 25 rights groups, Egypt has seen more than 250 cases of mass sexual assault between November 2012 and January 2014. The statement, issued by Nazra for Feminist Studies, condemned the culture of impunity around these attacks: "The state continues to be unable to stand up to these crimes."

Until then, it's important that artists like Mahmoud and the other groups that dedicate their their work to stopping sexual harassment create spaces for women to speak up and share their experiences.