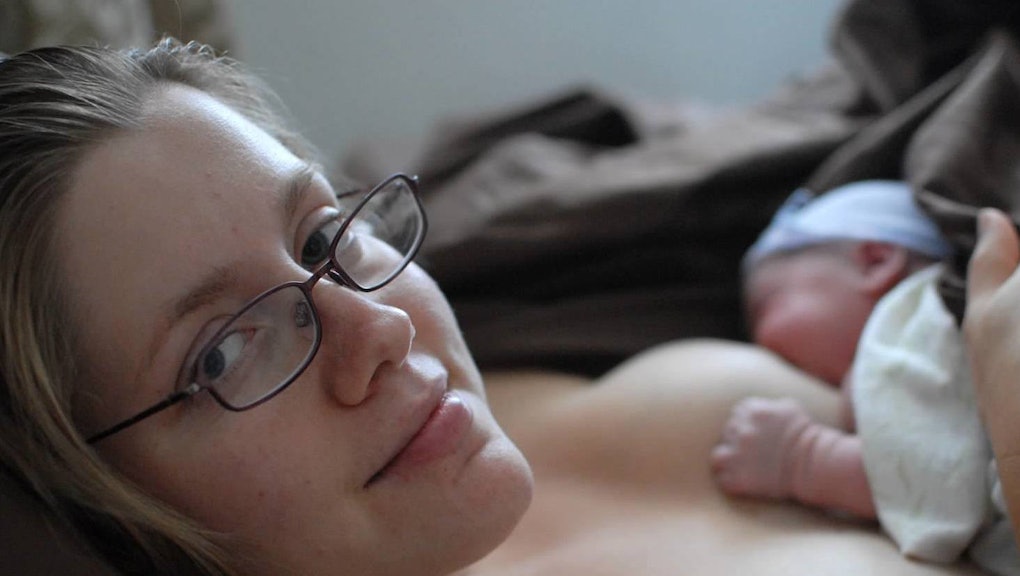 How Women Got Facebook to Tackle Their Nipple Problem

Well, it's about time.

Recently, and without so much as a whisper, Facebook has made a change to its often-criticized nudity policies and will now allow most photographs of nursing mothers in which (female) nipples make an obvious appearance.

Facebook's practice is to not announce changes to its Community Standards. But two weeks ago, after talking to the company for more than a year about these policies, I asked for a clear description and a statement on what we've called the social network's "Nipple Problem." In response, Facebook's spokesperson verified that the company will no longer remove photos of actively nursing women because nipples are visible and the line referring to fully exposed breasts was removed from the standards. At least in this case, women's bare nipples, like men's, will not longer be "obscene" and "offensive."

This is a clear step in the right direction for a company accused in the past, and still today, of suppressing women's freedom of expression while upholding the rights of bullies, misogynysts and rape apologists. The policy change comes a year after last June's decision to allow post-mastectomy photographs, previously barred if a healthy exposed nipple was visible.

Many people don't understand why these types of policies matter. Why, as a Telegraph writer wrote last week, "Would Women Want to Walk Around Topless in Public?"

But while they may seem insignificant to outsiders, Facebook's policy change is a move towards destigmatizing non-sexually objectifying female nudity and decriminalizing female bodies, both of which are closely tied to women's rights of free speech and expression. Two weeks ago, a woman who posted a picture of herself breastfeeding her baby with a nipple exposed would have had it removed if a member of the Facebook community flagged it as "offensive." She would then have gotten a message that the photo was removed, probably as "pornographic." Today (and as the compnay retrains its moderators), these mothers should no longer be targeted.

The change has been a long time coming. Facebook has long drawn criticism for double standards when it comes to its policies. Last year, when fellow activists Jaclyn Friedman, Laura Bates and I organized a social media campaign challenging Facebook to recognize gender-based hate., the public focus of that initiative was on revealing the ways in which content depicting gross violations of women’s human rights — rapes, domestic battering, widespread violence against women — were being treated as, among other things, harmless jokes. That campaign clearly tapped into a groundswell of frustration, as within a week 100 women's rights organizations joined the fight, generating 60,000 tweets, and 5,000 emails that prompted 15 advertisers to boycott the site. Finally, Facebook acknowledged the problem and committed to addressing it.

It's important to note that there is nothing intrinsically progressive about technology or social media, and that Facebook equivilent, population and culture wise, to the third largest country in the world, reflects mainstream American social mores regarding sex and gender and sexuality. Similar to the way regulating bodies like the Motion Picture Association of America and the Federal Communications Commission operate, Facebook's policies can seem demonstrably retrograde when it comes to women's bodies and representation of them.

Depictions of women as sexual objects (overt pornography violates community standards) or images that debase women overtly are broadly allowable with no concern for the denigrats while women representing their own bodies for non male-gaze sexual pleasure —- heath, art, politics, the content are still considered "obscene." At the time of our campaign post-mastectomy photographs, like nipple-visible breastfeeding ones, were not allowed on the site if a healthy nipple was visible, for example. Thise “obscenity” double standard simply does not apply to men in equal measure.

The company, like Instagram most notably last week in the wake of Rihanna's and Scout Willis' protests, struggles in its attempts to marry traditional and feminist ideas about bodies, their representations and who has access to them. No where is it simpler to demonstrate the ridiculousness of the nipple rule than when it comest to breast-feeding mothers.  While breastfeeding in public is legal everywhere, it remains controversial — on or off line — for many. On Facebook pages such as FB v Breastfeeding and Hey Facebook! Breastfeeding is Not Obscene have for years protested this policy. There aresteady streams of opportunity, especially those featuring allowable graphic violence, such as beheadings in the past, to demonstrate the sillness of this policy, especially when it comes to nursing women. Facebook has long been aware of these issues and has now addressed them in a way that will reduce what I can only term as harassment of nursing mothers.

Take the example of #FreeTheNipple, a movement that's grown up around the upcoming movie of the same name, released this PSA about breast-feeding today. The filmmakers have been virtually unable to make their movie, or to share information about it in social media, however.

The new flexiblity regarding breast-feeding mothers is a good sign, especially in the wake of the mastectomy policy change. But it is not good enough. The question now is, what about women's artistic and political speech and expression?