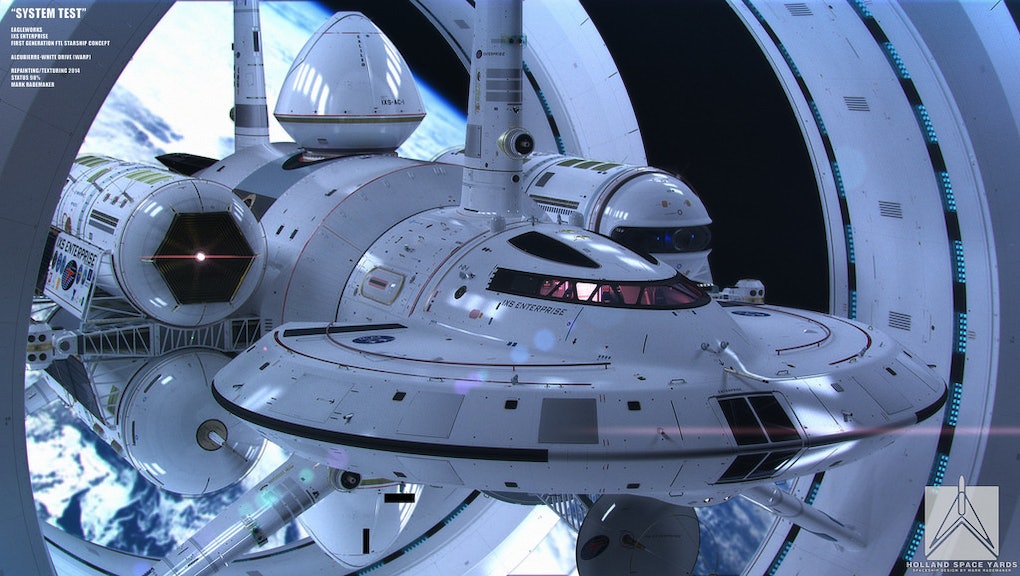 The news: According to Star Trek, the warp drive is an advanced engine that distorts the space and time and allows starships to travel faster than the speed of light. But while the engine didn't appear in Gene Roddenberry's fictional universe until the year 2063, NASA is already trying to make the warp drive a reality.

It almost sounds too good to be true, but physicist Harold White and his team at NASA have already proposed designs for a real-life starship Enterprise. A spacecraft with a functioning warp drive could potentially travel to nearby stars in a matter of weeks — all without violating Einstein's theory of special relativity.

How it works: "In terms of the engine's mechanics, a spheroid object would be placed between two regions of space-time (one expanding and one contracting)," explains io9. "A 'warp bubble' would then be generated that moves space-time around the object, effectively repositioning it — the end result being faster-than-light travel without the spheroid (or spacecraft) having to move with respect to its local frame of reference."

That means the spacecraft won't actually be traveling faster than light; it'll bend the spaces around it and make distances shorter, which is much cooler.

A visualization of the 'warp field' that allows for faster-than-light travel in 'Star Trek'. Image Credit: WikiCommons

"Remember, nothing locally exceeds the speed of light, but space can expand and contract at any speed," White told io9. "However, space-time is really stiff, so to create the expansion and contraction effect in a useful manner in order for us to reach interstellar destinations in reasonable time periods would require a lot of energy."

This is the stuff of science fiction. While warp drives are perhaps most famous from the Star Trek franchise, other beloved science fiction properties, such as Doctor Who and Starship Troopers, as well as Christopher Nolan's upcoming Interstellar, have all made good use of the trope. But if NASA's theory works, warp engines won't be just a cool sci-fi device any longer. They will be a real means to explore our galaxy further and push the boundaries of space exploration.

Somewhere out there, Scotty is losing his mind with excitement.