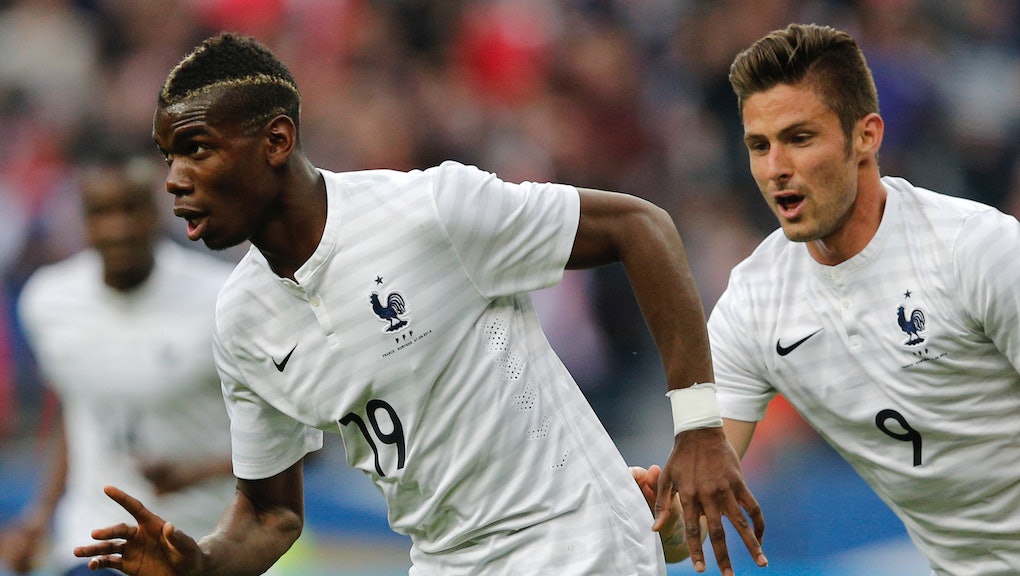 Countless precocious talents have used the World Cup as a springboard from relative anonymity to international stardom, among them Toto Schillaci, Michael Owen, El Hadji Diouf and Mesut Özil. Here are a dozen young players — all 25 or younger — who could be household names in a month's time.

From the Manchester United perspective, the 21-year-old Pogba is the one who got away. Since leaving the Red Devils as a teenager in order to get more playing time in 2012, the midfielder has developed into a star for Juventus over the past two seasons. After helping France's Under-20 team win the 2013 U-20 World Cup and winning the Golden Ball award as the tournament's best player, Pogba is expected to be a key asset for Les Bleus as they look to rebound from a disastrous 2010 campaign.

At the 2010 World Cup, Cameroon, the top-ranked African team in the field, scored two goals, earned zero points and crashed out of the group stage. Expectations are tempered this time around with the Indomitable Lions stuck with Brazil in the tough Group A, but striker Vincent Aboubakar could surprise Mexico and Croatia in the battle for second place. The 22-year-old is fresh off a 16-goal campaign with France's FC Lorient and has attracted the eyes of Chelsea, a club that is always on the lookout for the best young strikers. Let's just hope he doesn't try one of these dives again.

Could Brazil be stunned in its opening match against Croatia? If so, odds are that Kovacic will have something to do with it. The Austrian-born creative midfielder may have only just turned 20 years old, but already he has developed into a confident playmaker for Inter Milan over the past season and a half. Set to play alongside Real Madrid star Luka Modric, the two midfielders could provide just what Croatia needs if it is to advance past the group stage for the first time since its charmed run to the semis in 1998.

When holding hands with his 6-foot-2 Brazilian teammate David Luiz, 5-foot-5 attacking midfielder Bernard looks like a child. With the ball at his feet, though, things are a different story. Although he is not a prolific goal scorer — Brazil will look to Neymar, Fred, Jo and Hulk for that — the 21-year-old offers a dangerous combination of speed and creativity along the left flank. This may be Neymar's World Cup, but Bernard, who plays for Shakhtar Donetsk, expects to play a vital role in providing the necessary service.

After spending the past two seasons developing behind iconic wingers Arjen Robben and Franck Ribery at Bayern Munich, Shaqiri seems poised for a breakout performance in Brazil. The speedy 22-year-old has fresh legs — he started only 10 games in the Bundesliga last season, scoring six goals — and will be crucial to Switzerland's World Cup hopes. Whether or not Shaqiri stays at Bayern Munich or goes to England — Liverpool has reportedly been keen on the midfielder for months — the future seems bright for the ethnic Albanian.

There's a reason Arsenal and Liverpool are already reportedly entrenched in a battle to sign Aurier, the Ivory Coast's right back. After all, the 21-year-old is both a solid defender and a player with the speed and confidence to storm up the right flank and deliver dangerous crosses. He's already so good that Aurier's Toulouse manager has praised him as "one of the best if not the best [right-back] in Ligue 1."

It's a good sign if your national team coach wants you to play for his club team as well. That's exactly what Dutch manager — and soon-to-be Manchester United coach — Louis van Gaal reportedly wants from the 20-year-old. Depay transformed into a star for PSV Eindhoven this past season, scoring 12 goals in 32 Eredivisie games.

After three strong years for Hamburg, South Korea's Heung-min Son proved he could thrive while playing for one of Germany's top teams, as he scored 10 goals during the 2013-14 Bundesliga for Bayer Leverkusen this past season. With the ability to confidently score with both his right and left foot, the 21-year-old can play as a wide-forward or attacking midfielder and should be a consistent attacking threat for the Korean side.

When it comes to scoring goals, the biggest obstacle that Draxler might face in Brazil is getting on the field. Even without the injured Marco Reus, Germany has numerous attacking options, including Draxler, the 20-year-old attacking midfielder who plays for Schalke. Even if the rising star doesn't make it into Germany's starting XI, Draxler offers a potent weapon for coach Joachim Low.

Until last week, England was carrying a nearly four-hour streak of not having conceded a goal. It didn't take long for Ecuador's Enner Valencia to end that. It was no fluke either, with Valencia having scored an eye-popping 18 goals in just 22 appearances with Liga MX's Pachuca in 2014. Since being converted from a winger to a center-forward on the national team after the tragic death of teammate Christian Benitez, the 25-year-old has thrived for La Tri. Now we'll see if his good form can carry over to sport's biggest stage.

After proving himself as one of AS Roma's best players this past season in Serie A, the 24-year-old midfielder has the chance to orchestrate a historic run for World Cup debutants Bosnia-Herzegovina. The playmaker has scored eight goals in 48 national team appearances and is the team's primary leader despite his age.

The 21-year-old Musa will be one of Nigeria's key weapons in Brazil — if he's healthy, that is. Having injured his thigh last week, Musa did not play in the Super Eagles' recent friendly against the United States, but still hopes to be ready for Brazil. There, the speedy CSKA Moscow winger needs to help Nigeria get off to a strong start in Group F against Iran. Nigeria, after all, will need someone to have confidence in front of goal — something they were sorely lacking in 2010.