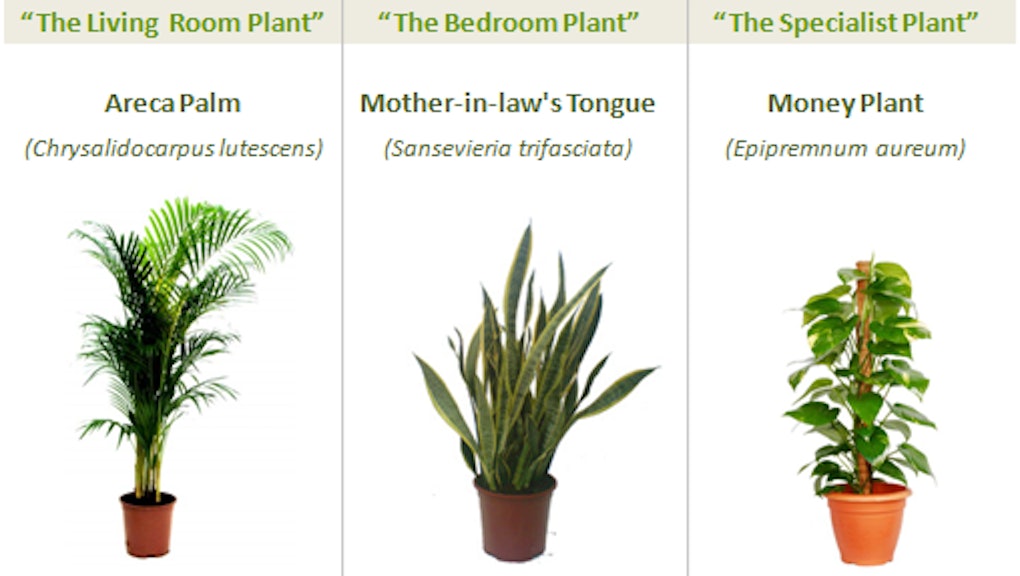 Thanks to 3 Miracle Plants, You Can Now Grow Fresh Air in Your Own Home

If you're trying to get more fresh air, you might have better luck indoors. Kamal Meattle, the environmental activist who pioneered a project to create India's healthiest building, has good evidence to indicate that cleaner ambient air is simply a matter of growing the right plants inside. Three of them, to be exact.

Just like any other plant, these leafy green creatures absorb carbon dioxide and emit oxygen. But thanks to a few other properties, these three plants complement one another to mop up as much as 87% of indoor air pollutants within 24 hours.

How it works: Trees and plants absorb harmful pollutants by sucking them up through a network of tiny pores on the surface of their leaves. This system also siphons particulate matter — the tiny particles of liquid, metal, soil and dust that can pass through the throat into the lungs, along with the byproducts of fuel and many of the toxic chemicals used in building materials.

Areca Palm: Instead of splurging on a humidifier, you might want to try one of these. At its full height, this tall, leafy plant transpires up to a full liter (about four glasses) of water, warding off dry office air. The shrub also absorbs particulate matter, some of which can lead to heart disease, asthma and a host of other severe health problems, according to a NASA study.

Mother-in-Law's Tongue: While many plants inhale carbon dioxide and exhale oxygen during the day, this plant's long, dark leaves push fresh air into the environment at night, making it a good complement to the areca palm. It also absorbs nitrogen oxide, a fossil fuel and agriculture byproduct that accounts for 6% of all U.S. greenhouse gas emissions, and cancer-causing formaldehyde.

The Money Plant: Instead of another cup of coffee, you might want to give this plant a shot. Like Mother-in-Law's Tongue, the money plant sucks up formaldehyde and other building pollutants. It also absorbs benzene, an air pollutant found in car exhaust that can cause dizziness, drowsiness and headaches.

Try this at home (or work): Meattle used his plant wisdom to outfit his own building, a 20-year-old, 50,000-square-foot edifice in the most-polluted city in the world, New Delhi, India. He used 1,200 plants for 300 building occupants (which, at four plants a person, is considerably more doable than the numbers he recommended in his TED talk).

Any office building could implement Meattle's strategy by including clusters of the plants at the end of each row of cubicles, in the common areas and along hallways. In fact, clean air is one of the best way to combat Sick Building Syndrome, a vague but real illness that can lead to irritation in the eyes, nose and throat, skin irritations and neurotoxic or general health problems. Years of research have shown that better indoor air quality leads to healthier students and staff, better work and fewer skipped days at school or the office. Sounds like every boss's dream.