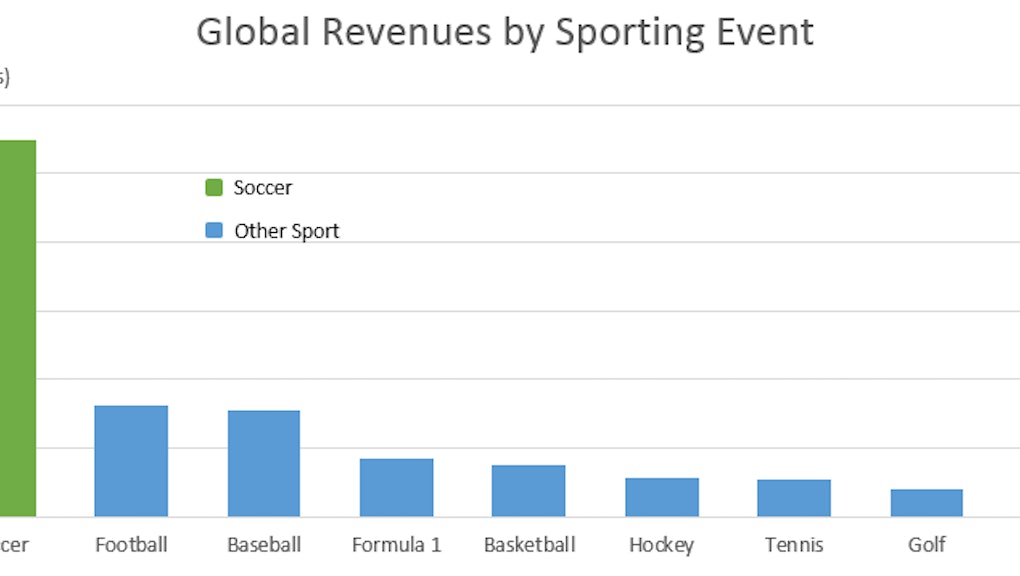 However, the sport hasn't quite reached mainstream status in the U.S. Looking at game attendance figures across the major U.S. sports, it's clear soccer has a long way to go. Last year, Major League Baseball (MLB) games saw total attendance of over 74 million people, while the comparable number for Major League Soccer (MLS) was only 6 million. And with only 19 teams, MLS lacks a presence in many large U.S. cities. The MLB, NBA and NFL each have 50% more teams than does MLS.

For sports fans in America who can't quite psych themselves up to obsess over the World Cup, here's some motivation to get on the global bandwagon.

Soccer matches generate almost as much revenue as the combined revenues from all U.S. sports, golf, tennis and Formula 1 racing, according to a study conducted by consulting firm ATKearney in 2009. The dollar figures shown above reflect global ticketing, media and marketing revenues for every major sport.

2. Soccer is the most Twitter-friendly sport.

Soccer clubs have the most representation among the top sports organizations on Twitter. In particular, FC Barcelona is so popular that its English, Spanish and Catalan Twitter handles all make it into the top 10.

3. Soccer teams are the most valuable teams in the world.

Every year, Forbes ranks the world's 50 most valuable sports franchises. In their most recent report, the top three franchises were all soccer clubs. Real Madrid, Manchester United and FC Barcelona had a combined value of over $9 billion in 2013.