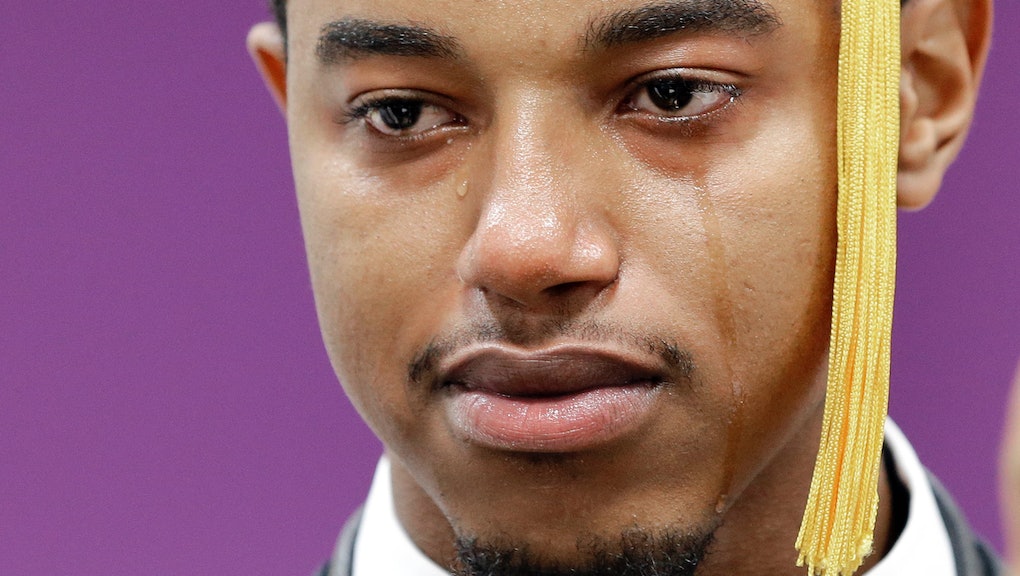 The news: Republicans just killed a bill that would have allowed students to refinance their loans at lower interest rates because rich people would have to pay for part of it.

Sen. Elizabeth Warren's (D-Mass.) Bank on Students Emergency Loan Refinancing Act didn't even get past a procedural vote, failing 56-38. Warren said the bill was designed to ease the debts of 40 million Americans who collectively hold nearly $1.3 trillion in loans, at a stunning $30,000 per borrower.

Senate Republicans objected to the inclusion of the so-called Buffett Rule to pay for it, which would have raised income tax rates on rich people who obtain most of their income from investments. Raising taxes is a non-starter for the GOP in both the House and Senate. Just three Republicans signed on with the bill.

"Today is a really good day for billionaires. For the 40 million people dealing with student loan debt, it wasn't such a good day," Warren said. "This raises the fundamental question: Who does Washington work for? Does it work for those who can hire armies of lobbyists to make sure that every single loophole in the tax code is protected for them? Or does it work for young people who are trying to get started in life?"

The background: Warren's proposal would ease interest rates on millions of student loans, making it much easier for Americans to pay back their obligations and reducing the amount of unnecessary debt college graduates have accrued thanks to the rising cost of college and a job market that's suffered for the past six years. But it wouldn't be free.

The Congressional Budget Office estimated that S 2292 (an earlier version of the bill) would have cost a combined $55.6 billion. Essentially, the Buffett Rule would impose a new minimum tax on anyone making more than $1 million a year, and when phased in, would ensure that anyone making $2 million or more annually would have to pay at least 30% of all earnings in income, alternative minimum, payroll and Medicare taxes. The nonpartisan Tax Center estimates that the effective tax rate on capital gains is less than 14%, and that 94% of the savings go to those making more than $200,000.; 76% goes to people making more than $1 million a year.

The Buffett Rule nonetheless is widely popular, enjoying as high as 72% support in some polls. And it's actually a rather conservative proposal as far as tax increases go, considering some economists say tax rates on the very wealthy should approach much higher rates. (Defense of such low tax rates is a relatively modern phenomenon. President Ronald Reagan himself, the original proponent of supply-side economics, decried "crazy" tax loopholes that allowed the rich to pay less than a "bus driver.")

Anyhow, considering that the Buffett Rule is a complete dead-end for both Senate and House Republicans, some people have criticized its inclusion as totally cynical, claiming Democrats are just looking for election-year cannon fodder. The narrative goes: Democrats are trying to artificially engineer a situation that looks like Republicans are defending the interests of the rich against debt relief for beleaguered students.

So, is it cynical? Maybe a little, but that is the Republican position! Tax hikes are a complete non-starter, and furthermore, Warren's proposal would be crushed by House Republicans even in the unlikely event it passed the Senate without the Buffett Rule. In this case, "politicizing" the issue is just the natural outcome of two brick walls smashing together. It's not like Warren's proposal stood a chance, with or without higher taxes on the rich.

The official Republican plan is to end federal loans and support private colleges, which cost an average of $21,458 more than in-state public colleges. This is more or less a complete ideological difference of opinion.

So the Democrats' response — to politicize the issue — is indeed a little cynical because it's not going to happen. But it's more or less the default path forward when constructive, bipartisan attempts to address the issue of student debt more or less are impossible. This is another great example of our broken political system.

Regardless, don't expect to see your student loan rates go down anytime soon on Congress' behalf, since it's incredibly unlikely all this politicking will break the GOP grip on the House in November.