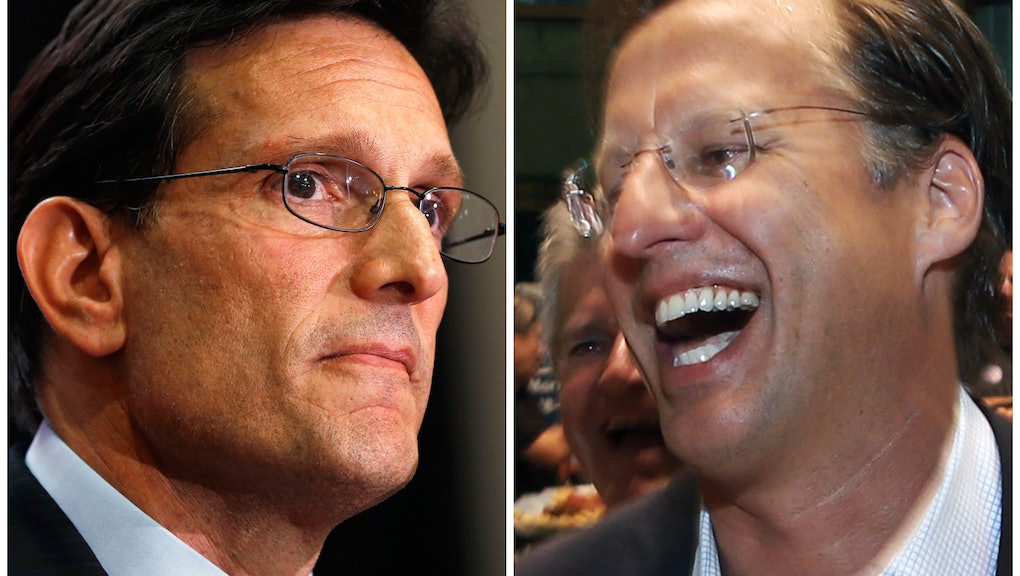 The Crazy Things David Brat Believe Will Make You Wonder How He Earned His Ph.D

The man who beat Eric Cantor may have a Ph.D., but he sure doesn't act like it.

I'm not saying this because I disagree with his political views. There are plenty of conservatives and libertarians in academia (hoary claims of ivory tower "liberal bias" notwithstanding), and while I don't share their opinions on a multitude of subjects, we have always stressed rational debate and fact-based inquiry.

The problem with Brat is that, like so many Tea Partiers, he rejects objective realities when they clash with his partisan agenda. For instance:

1. He perpetuates the myth that the Founding Fathers created America as a Christian nation.

It's no secret that Brat, like many on the far right, openly believes that God is on his side. Hence few were surprised that the man with the Master of Divinity degree from Princeton Theological Seminary made declarations like "God gave us this win" and "God acted through people on my behalf."

More disturbing was his assertion that "faith in God, as recognized by our Founding Fathers is essential to the moral fiber of the Nation" and that Cantor needed to lose because he "failed to uphold that Creed."

Considering that there were no well-known blemishes in Cantor's personal life, it's fair to assume that his alleged "failure" involves his policies, which, in turn, implies that the Founding Fathers wanted America to be governed on Christian ideals. This is a flat-out lie, as demonstrated in numerous works of indisputable scholarly authority. For those who don't feel like checking them out, I refer you to this pair of quotes from the authors of our Declaration of Independence and Constitution:

"Christianity neither is, nor ever was, a part of the common law." - Thomas Jefferson (1814)

"An alliance or coalition between Government and religion cannot be too carefully guarded against. ... Every new and successful example therefore of a PERFECT SEPARATION between ecclesiastical and civil matters is of importance." - James Madison (1822)

2. He has misrepresented the science behind climate change.

While I couldn't find any quotes from Brat flat-out denying anthropogenic global warming, this quote from a campaign video is pretty troubling:

"They [climate scientists] said we're going to run out of food 200 years ago, and then we're going to have another ice age. Now it's, we're heating up …"

Brat is almost certainly referring to an infamous story from a 1975 issue of Newsweek called "The Cooling World," which quoted a handful of scientists saying they thought the Earth's temperature was cooling instead of warming up. As the American Meteorological Society has explained, however, this was never the position of more than a handful of scientists:

"A review of the climate science literature from 1965 to 1979 shows this myth to be false. In fact, emphasis on greenhouse warming dominated the scientific literature even then."

Here is the full quote, courtesy of Brat's 13-page essay in a 2011 issue of Interpretation: A Journal of Bible and Theology:

"Jesus was a great man. Jesus said he was the Son of God. Jesus made things happen. Jesus had faith. Jesus actually made people better. Then came the Christians. What happened? What went wrong? We appear to be a bit passive. Hitler came along, and he did not meet with unified resistance. I have the sinking feeling that it could all happen again, quite easily."

I don't even know where to begin. For one thing, his characterization of Hitler's ability to achieve and maintain power is grossly simplistic (if for no other reason than, despite Hitler's own views on Christianity, many Christian right-wing elements in Germany supported him).

Additionally, as the rest of the essay makes clear, Brat's chief reason for thinking another Hitler could rise again in America is the simple fact that the state has more violent power than any individual who opposes it — a fact that applies to every sustainable government that has ever existed. Finally, there is the ludicrous notion that Christians have been historically passive. To counter that, I will close with another quote from Thomas Jefferson (with whose work Brat should definitely familiarize himself):

"Millions of innocent men, women, and children, since the introduction of Christianity, have been burnt, tortured, fined, and imprisoned; yet we have not advanced one inch toward uniformity. What has been the effect of coercion? To make one-half the world fools and the other half hypocrites. To support roguery and error all over the Earth."