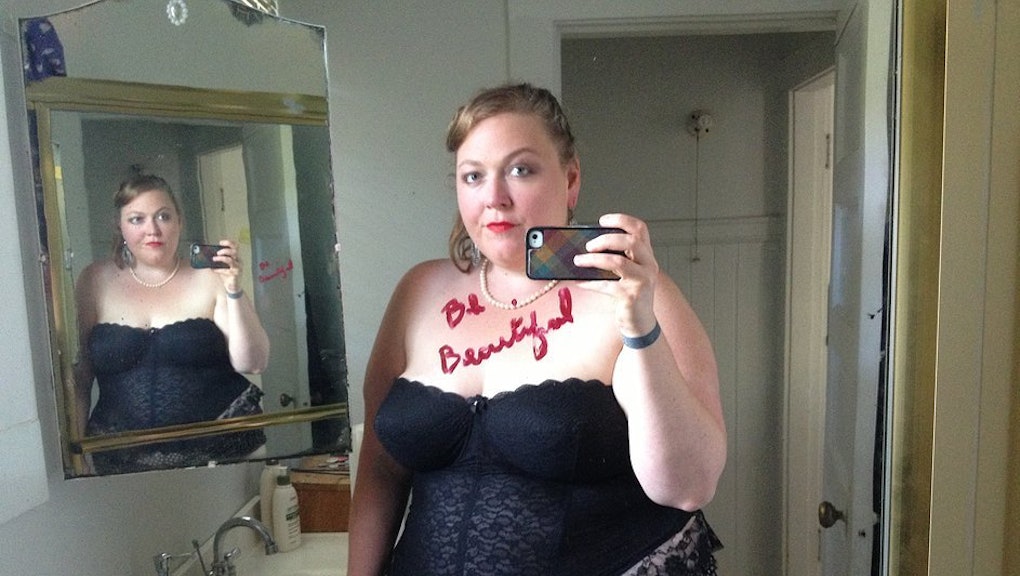 Every day, for 30 days, Denise Jolly took a photograph of herself. Jolly, who is 6 feet tall and weighs 311 pounds, posed in places she loved, both public and private, often with little clothing and the words "Be Beautiful" written across the parts of herself that made her feel vulnerable.

Performing such a thorough examination of one's body might be a daunting undertaking all on its own, but Jolly, an artist, writer, performer and educator, took things further still by publicly posting the images to social media.

"I wanted to vomit when I shared the [first] image on my social media page," she wrote in the Huffington Post. "I was so scared of all the horrible things people would say in response to the picture."

Far from being horrible, the response to Jolly's photos has been positive and empowering. Jolly soon learned that the people around her were overwhelmingly supportive of her "Be Beautiful" project, which began as a journey both to redefine beauty and get to know her own body.

"In talking with a friend I realized I had never shared photos of my body with a could-be lover, which in turn lead me to realize I had never stopped to look at my body in my underwear or naked for that matter," Jolly told PolicyMic in an email. "I was 34 years old and had no clue what my body looked like. I knew there was no way I was alone in that experience."

Women's bodies are sites of near-constant judgment and criticism, and Jolly is not the first to publicly challenge restrictive ideals of how they should look. Earlier this year, two filmmakers launched a highly publicized Kickstarter campaign for a body-positive documentary called Fattitude. Sadly, within days, its creators were being viciously stalked and terrorized by online trolls.

Australian photographer Taryn Brumfitt also tackled harmful media messages surrounding women's bodies with an unconventional before-and-after shot that flew in the face of traditional beauty narratives. Brumfitt has currently raised nearly $300,000 for her own feature-length documentary, Embrace, meant to empower women to love themselves exactly as they are.

Weight discrimination is a serious issue with far-reaching consequences, and heavier individuals face a lower likelihood of college admissions, less job earnings and fewer promotions. What's more, common weight-based prejudice, even supposedly used with a sense of well-intentioned (if condescending) concern, may be actively harmful: A long-term study at UCLA recently found that young girls who are called "fat" at a young age are more likely to become obese later in life.

It's clear that we need to start teaching body positivity and acceptance from a young age, meaning projects like Jolly's are more important than ever. Check out some of her beautiful and inspiring photos below.

"A want for love is what inspired the Be Beautiful project."

"The beliefs I carried about my body and what it looked like were born from social and cultural indoctrination. Therefore, the work in dismantling my internalized shame about my body had to be done both in intimacy and publicly."

"I went from never having looked at my body in my underwear to looking at it every day, two hours a day for 30 days from multiple vantage points. Which is to say I went from being invisible (to myself) to being visible."

"Once I knew what my body actually looked like, I could explore what I liked or didn't like and why. I could unpack who or what fostered those beliefs and deem them as valid or invalid based on my true experience as opposed to another person or entity's projection."

"I am extremely grateful for every person who has taken the time to write me and share their story, and am inspired by those who have joined me in challenging why they believe they are anything other than beautiful or amazing, powerful or possible."

"I am of the belief that we are currently in a position to inform cultural perceptions and belief systems in way we have not had access or resource to do in the past. ... We have gone from watching scripted lives on network television to watching each other's lives. In doing so, we impact those we interact with on those mediums directly, which shifts the ways in which we engage each other in the physical world."

"Surround yourself with a community of people who see you and want to support you in becoming your most powerful self."

"The Body is Not an Apology has been a remarkable resource for me. In that community I have learned so much about how to believe in myself and how to best support others in shared community. We are all socialized to hate and destroy each other and ourselves. It is through communities like the Body is Not an Apology we can work to actively understand and support each other so we can live as our most powerful and beautiful selves."

Check out the full series of photos on Denise Jolly's website. All images courtesy of Denise Jolly.