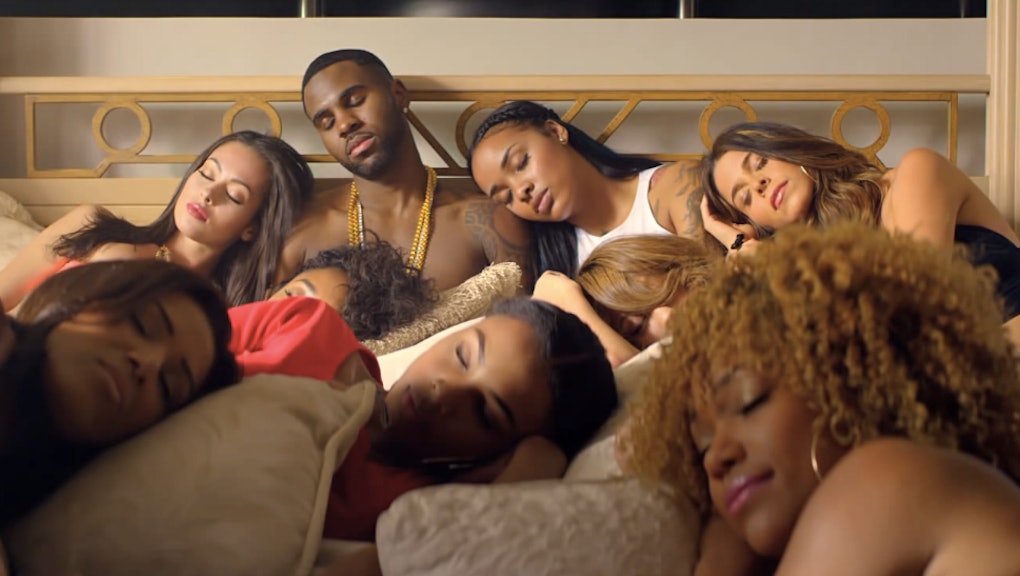 Singer Jason Derulo's latest single is called "Wiggle." It is, unsurprisingly, about women's backsides and what, specifically, they can do with them. The single has broken the top 10 thanks in large part to a video that checks all the boxes for your average sexist hip-hop/R&B music video. It opens on Derulo in bed with a veritable harem of women. Men ogle at women wearing next to nothing through binoculars, men drink out of a shot luge shaped like a naked woman, the singer pantomimes having sex on a stage and the women, of course, are wiggling.

Objectifying women isn't an anomaly for the music industry itself. But it's a bit out of character for Derulo. Besides "Wiggle" and a couple of his previous releases (including "Talk Dirty" ), the majority of his music casts him as a tender casanova. His song "Marry Me" is a plea to the woman he loves to spend the rest of her life with him (baby-making music in the key of monogamy), and "Fight for You" describes his pledge to save a rocky relationship, despite the hard times. But his biggest chart successes have revealed an oddly lecherous Derulo who almost seems to mock his more tender side. It's like Dr. Jekyll and Mr. Hyde — there are two Jason Derulos, because pop culture demands two sides of every man.

R&B is a great bastion of the male double standard. Singers everywhere are expected to be charming and gentlemanly in order win the hearts of the women in their songs (and, not coincidentally, the hearts of their female fans). At the same time, and even for the same audience, they're meant to assert their power and protect their masculinity by using those same women. On one track, they're charming and wooing you. In the next, they're rapping to Snoop Dogg about the precise shape of your ass. It's suspicious.

Derulo isn't alone in this at all. Usher danced into the hearts of women with "My Boo," his soft duet with Alicia Keys about being childhood sweethearts. Usher sings, "There's always that one person / That will always have your heart / You never see it coming / Cause you're blinded from the start / Know that you're that one for me." So here we have an Usher who has been monogamous since age 5. And then there's "Without You," his most recent collaboration with DJ David Guetta, in which he sings, "I am lost, I am vain / I will never be the same / Without you." Sounds like the same guy — it could even be the same woman.

The same exact trend plays out in Trey Songz, who can immediately flip between "But she loves me, and it's simply amazing" and "I only came here for the bitches and the drinks." Over and over again, a male R&B's repertoire says the same thing: "Yes, I love and cherish women, but don't worry, guys — I'm not weak."

That lion-and-lamb double standard is damaging for men and women alike. It's the same as worrying about "being whipped," or putting hos before bros. You act whipped in one song to charm the women, and then you talk dirty in the next to keep men and women alike from thinking you're soft (like Drake). Such is the difficulty of playing to an audience of men and women in an unequal society.

But this dynamic only reinforces gender inequality. One of the larger consequences of this double standard is that it helps fuel women's distrust of men. As Shannon Ridgway of Everyday Feminism Magazine explains, "From birth, women are taught to protect themselves from others (namely, men): Don't talk to strangers. Don't walk alone after dark. [...] [W]e internalize this advice and begin to learn to protect ourselves from the acquaintance that we kind of know from class or a job, or even from our boyfriends or husbands (since, after all, 1 in 4 women in the U.S. have been stalked, abused or assaulted by an intimate partner)." This isn't to say that all men are dangerous — just that since we live in a society where gendered crime is common, women can't trust that they can distinguish the violent men from the decent. So if Jason Derulo is singing about true love and marriage while also blatantly using women, his credibility among women starts to dwindle.

Pop and R&B stars, then, are perpetuating a damaging culture of duplicity for nobody's benefit. Men suffer dearly, too: The cult of masculinity and stoicism weighs so heavily upon them that they often can't be themselves. But there are some who have turned away from this convention by singing about their personal experiences, like rapper and R&B artist Frank Ocean, who has, significantly, pushed traditional conceptions of gender and sexuality in R&B. We need more artists like him, because music matters — especially the music you make love to.