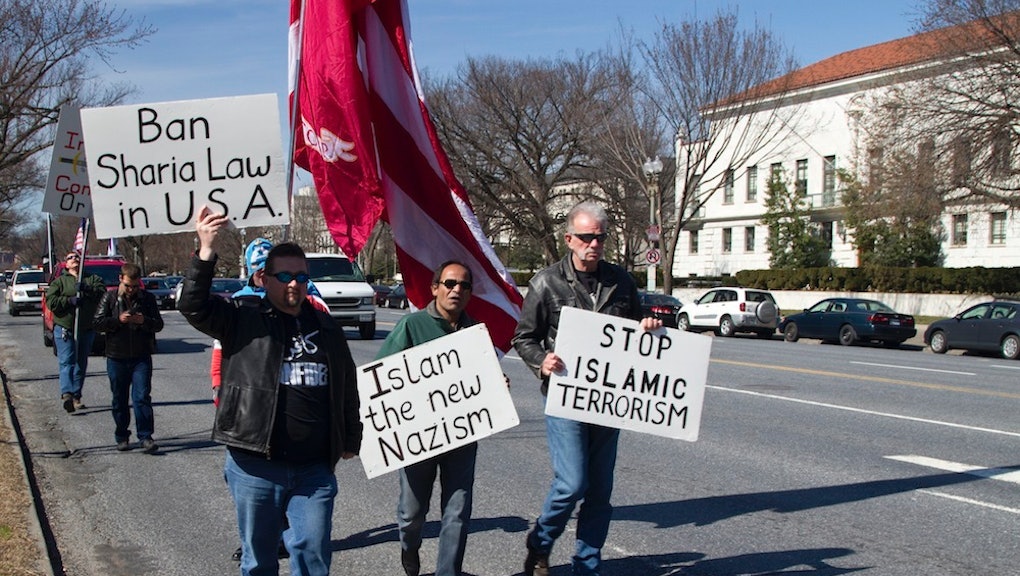 5 Myths the Media Needs to Stop Spreading About Sharia Law

One of the defining characteristics of the post-9/11 world has been a ubiquitous fear, in Euro-American countries, of the creepy imperial prowess of Islamic law — a prowess that never seems to exist outside the imaginations of overzealous protesters.

The hysteria over Islamic law here in the United States, in particular, started back in November 2010 when Oklahoma became the first state to pass an anti-Sharia law bill.

The bill stipulated that Sharia law (the religious law of Muslims), characterized as "international law," had no place in American courts. While the bill received overwhelming support in Oklahoma, it was struck down by the 10th Circuit Court of Appeals for being unconstitutional in 2012. Since 2010, however, more than 24 states have introduced or passed anti-Sharia law legislation. What started out as a small campaign created and led by two men, essentially, quickly became a quiet firestorm across the U.S. Despite its contribution to an atmosphere of distrust of Muslims and Islam, little attention is paid to the anti-Sharia legislation movement.

The rapid growth of the movement is in part because of the dearth of reliable and accurate information about Islam, Muslims and Islamic law.

Between the U.K.'s Halal Hysteria, Brunei's introduction of an Islamic criminal penal code and ISIL taking down cities in Iraq in order to establish a caliphate, the existing discussion and depictions of Islamic law hinge more on sensationalist tropes about scary Muslims than on actual substantive engagement with the law itself.

Here are some of the most common misperceptions and myths about Islamic law:

1. I don't know what Sharia is, but those ISIL guys seem to love it.

ISIL, the Islamic State of Iraq and the Levant, is wreaking havoc in Iraq, after having wreaked some in Syria. Its primary goal is to erase the borders between the two countries and establish a decentralized government which abides by and enforces Islamic law, or Sharia — or at least their understanding of it.

So what does Sharia actually mean? The actual definition of the Arabic term is "path to the watering hole." It consists of moral and ethical principles meant to guide Muslims towards what will nourish their soul. According to Islamic law specialist Dr. Sherman Jackson, Sharia is everything "from honoring one's parents, to helping the poor, to being good to one's neighbor." This also includes the basic tenets of Islam, like the five basic pillars.

So what does it mean when a group like ISIL talks about establishing the rule of Islamic law in its captured regions? In this case, the group seems specifically concerned with establishing its own interpretation (and then some) of laws that regulate criminal acts and social welfare.

This is where it becomes important to distinguish between Fiqh (jurisprudence) and Sharia. Fiqh is basically dry law stuff that is more interested with how things are done than with why they're done (which is what Sharia is!). Fiqh tries to understand how to apply those moral principles and guidelines in day-to-day life and worship, and it does so through juristic interpretation of the Quran and prophetic traditions. It deals with the how of social legislation, private religious practice and worship, rituals, transactions, contracts and even torts. The distinction can be gray, but referring to Islamic law as strictly Sharia ignores a fundamental part of the legal tradition.

The recent brouhaha over Brunei's adoption of an Islamic criminal penal code highlights the need to differentiate between laws that Muslims create and Islamic law. This distinction is crucial. The former is law that is created by Muslims based on an array of sources, one of which may be Islamic law or an interpretation of a part of it.

In the colonial era, Muslim societies, ranging from North Africa to the subcontinent, were forced to abandon their legal systems for European systems of law. That means that many of the countries today that make headlines for applying so-called Sharia law have systems of law more similar to the British or French systems, with perhaps some interpretations of Islamic law sprinkled and codified in certain realms of law, specifically family law.

Pakistan's infamous "blasphemy law" actually has its roots not in Islamic law but, rather, in British legal legacies in India. Yup. Not Islamic law! Good ol' British overlords in 1860 just decided it was high time to codify insulting religion (not just Islam).

History. What a crazy thing.

3. You're a Muslim woman? Do you need saving?

The question of women's rights in the Muslim world, at least in the mainstream narrative, pits Islamic law against liberal, democratic values. But in actuality, Islamic law actually provides women with a social safety net and protections.

Islamic law expert Asifa Quraishi-Landes discusses these in a short report titled "Secular is Not Always Better," written for the Institute for Social Policy and Understanding. She argues that several Islamic rulings, from property rights to household duties, are far more progressive for women's empowerment than many American family laws.

Another example is so-called "honor-based violence," commonly cited in campaigns and headlines as evidence of Islam's abuse of women. In actuality, Islamic law does not concern itself with the issue of women's honor, let alone permit, what would be crimes in the name of honor.

This myth also stems from a tendency to conflate laws in many Muslim countries with Islamic law.

In fact, it is found that so-called "Islamic laws" in Muslim countries are anything but Islamic. In 1997, Quraishi-Landes published an influential paper, "In Her Honor," critiquing Pakistan's so-called "Islamic" sex/rape laws for being in direct contrast to the actual Islamic legal positions on rape and pre/extramarital sex.

ISIL in Iraq and Syria, Boko Haram in Nigeria, the Taliban in Afghanistan and Pakistan, Iran and Saudi Arabia — a cursory glance filtered through our lovely media lens seems to suggest that maybe Islam and democratic pluralist systems of governance just don't jive together. Islam and democracy are often put at odds with one another, both by many Muslims and many non-Muslims. Either it's part of a historical political project (see: colonialism) or it's just not preferred by those Muslims and those pesky authoritarian governments they seem to love so much.

Not only are Islam and democracy compatible, but Islamic law specialist Dr. Khaled Abou El Fadl argues that democratic institutions can help cultivate grounds for the cultivation of the Islamic principles of justice. Additionally, the most compelling argument for compatibility is in the Constitution of Medina, created by the Prophet Muhammad and considered to promote constitutional democracy that protects and promotes religious pluralism.

5. Islamic law is all about those lashes. No, not the ones you need mascara for.

You probably caught the story about the Sudanese woman sentenced to death for apostasy. Or the one about the outlawing of homosexuality in Brunei under its new Islamic penal code.

Due to popular, irresponsible, "click-bait" coverage of Islam, Muslims and Muslim-majority countries, Islamic law is often portrayed as being a criminal penal code. It's similarly presented, in its application, as existing within a political and historical vacuum. The majority of Islamic law, however, covers social welfare, business transactions, finance, travel, worship rituals, hygiene, charity, dietary restrictions and several other day-to-day life practices. So for a Muslim, "living under Sharia" can just mean praying five times a day, wearing a headscarf and staying away from bacon strips.

Punishments for crimes in Islamic law are meant to deter. They are not meant to be carried out wantonly and often, if not always, are textually accompanied with a set of difficult-to-apply pre-conditions that must be met in order for the punishment to be carried out. Because of this, the challenges posed by contemporary international laws and abuse of Islamic law itself by state authorities, there are conversations amongst Islamic scholars today about the future of the punishments prescribed in the criminal code of Islamic law. Perhaps most notably, Dr. Tariq Ramadan, a renowned advocate of Islamic reform through Islamic traditionalism, called for a moratorium on corporal punishment in Islamic law in 2005.