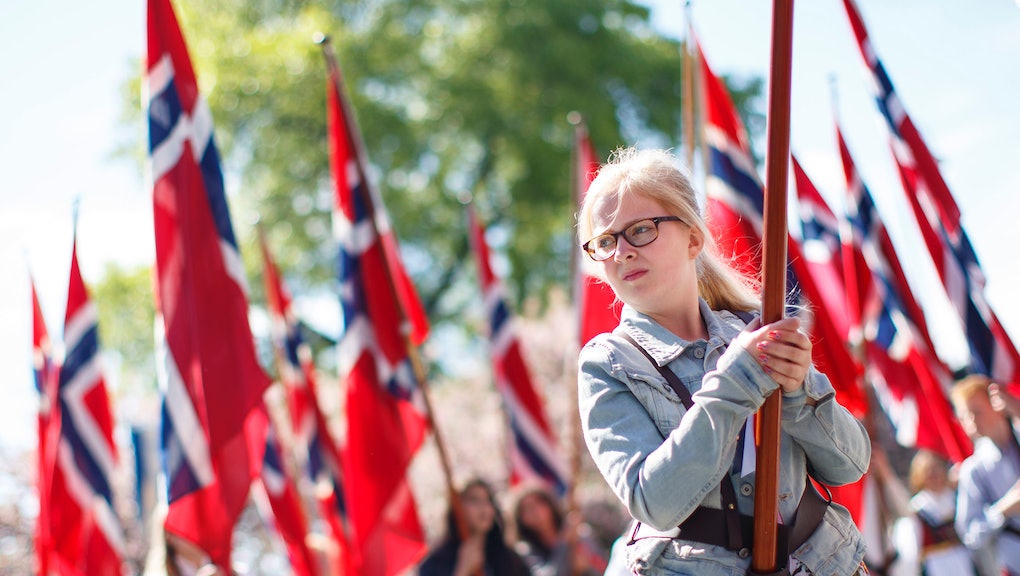 What America Can Learn From Norway's Success in Regulating Campaign Finance

In times of especially persistent pessimism, liberals like to turn their gaze across the pond. Since the end of World War II, the continent has become a constant source of envy for the Left: a paradise of strong unions, cheap college and single payer health care, the likes of which even Bernie Sanders could only dream of. It's always better in socialist, civilized Europe — and not just in matters of state largesse. Over the years, everything from tipping etiquette to race relations have been objects of progressive envy. At the height of freedom fries, with the stars and bars still waving proudly over South Carolina's capitol building, liberals 'round the nation turned their lonely eyes to Paris, all too happy to ignore — at least for a moment — racism's position somewhere between fine art and alcoholism on the list of fashionable French hobbies.

They're always better off in Europe, we're told in Slate, Salon, and the DailyKos, so we should learn from them. What policy lessons do they have for us?

But lately, the object of our trans-Atlantic envy hasn't been any of the usual suspects. After McCutcheon v. FEC carried on the ignominious legacy of Citizens United and Buckley v. Valeo by dismantling all but the last vestiges of American campaign finance regulation, liberal commentators have begun looking to Norway, where elections are inexpensive, short and relatively sane affairs, backed by a 74% rate of public funding. Why can't we do that here?

Norway, even among the nations of Europe, has taken a somewhat unusual approach to campaign finance regulation. First, we ought to step back and get a sense of Europe as a whole —how have its republics lent a credibility to their elections not seen here since the Reconstruction era? Paul Waldman at The American Prospect offers an extremely detailed breakdown (and true wonks can do the research themselves here). But the simple version is that European republics (with the bizarre exception of Finland, whose campaign finance laws are nearly identical to ours) have found two major ways to control their campaigns: limiting contributions and limiting spending.

The first measure is fairly simple, and mild enough that despite the onslaught of the Roberts Court, we still technically have it here (for now). Limiting contributions means setting a maximum on the amount any individual can contribute to a political campaign or party during any given election cycle. But it's worth noting that no European nation, besides Finland, relies solely on this control. That's because on its own, it isn't especially effective. Even if we set aside the profound impotence of direct contribution limits in light of the unlimited contribution allowances for outside groups in the wake of Citizens United, the policy tends to do little but force candidates to spend inordinate amounts of time raising money in small chunks in exchange for the largely cosmetic benefit of not simply accepting one multi-million dollar check and getting on with the campaign. It doesn't get money out of politics; it just makes it obnoxiously complicated to come by.

Image Credit: AP. Ballots at a polling station in Norway.

The second, far more popular method, is also more effective. Spending limits set a cap on how much a campaign (or its third party supporters) can spend in total on seeking office. Belgium, France, Greece, Ireland, Poland, Slovenia, Austria, Hungary, Italy and the U.K. have all implemented this approach to varying success — many without bothering to set up contribution limits with them (What, after all, is the point of donating millions to a candidate who can only spend a fraction of it?).

Beyond making campaigns much more constrained affairs, these spending limits have the important bonus of conveying the appearance of a fair playing field to the broader electorate. This is especially important when a lack of public confidence in electoral credibility is a leading driver of the United States' abysmal voter participation rate, which, more than any outright spending, is the cause of disconnect between our states' policy preferences and our electoral outcomes.

Image Credit: AP. Voters at a polling station during the U.S. presidential election in 2012.

But neither of these approaches is particularly viable in the United States. Contribution limits, as we've already noted, are already in place, but they’re fairly impotent, especially in the world of Super PACs. If Europe is our guide, we'd be better off with spending limits, but on that front we're confronted with a rare case of policy not so much beyond American political imagination as behind it. In 1974, Congress included spending limits in a series of amendments to the Federal Election Campaign Act. Then, in 1976, they were struck down by the Supreme Court in Buckley v. Valeo, closing that avenue for now.

Which brings us back to Norway. Although not entirely unique in its approach (Germany has similar reforms), Norway has seen the most success in controlling money in their politics without imposing limits on the giving and spending of the money itself. Instead, they've limited the scope of elections. Political advertising is banned on television and radio. "Campaign season" is defined by law and rather short. Public financing is generous and available. Rather than dictate how citizens and candidates use their money, the Norwegians have simply controlled the useful market for that money, and lo, their elections became tenable.

This approach has one clear upshot from the others: We haven’t tried it here. There is no Supreme Court precedent standing in the way, nor have attempts at similar reform already proven ineffective stateside. But as with so many lessons from Europe, the Norwegian model runs into pitfalls of its own. This time, they're linked to the fundamental structure of our government. As Waldman notes in his piece, limiting campaign venues (if they managed to survive a First Amendment challenge), still essentially relies on "traditions of stricter party discipline than we do, [which] makes members of the legislature somewhat interchangeable, which in turn can reduce the utility of buying yourself a few of them."

In other words, an incentive system relies on incentives. One of the basic ones in Norway is what little return one gets from giving rise to the appearance of corruption.

Still, it's an avenue to contemplate, even if it brings us back — as such attempts at objective lessons always do — to the realization that despite our holy reverence for the Constitution, the particulars of a 238-year-old governing document can have its downsides. Short of a constitutional amendment, the feasibility of which makes sudden Senate enthusiasm for a German-style carbon tax look eminently plausible, we're limited in our options. But it can be nice to dream, or to consider the most enviable European import of all: a modern, parliamentary system of government.

Then, maybe, we could have nice things, and spend our oil money like Norway does.