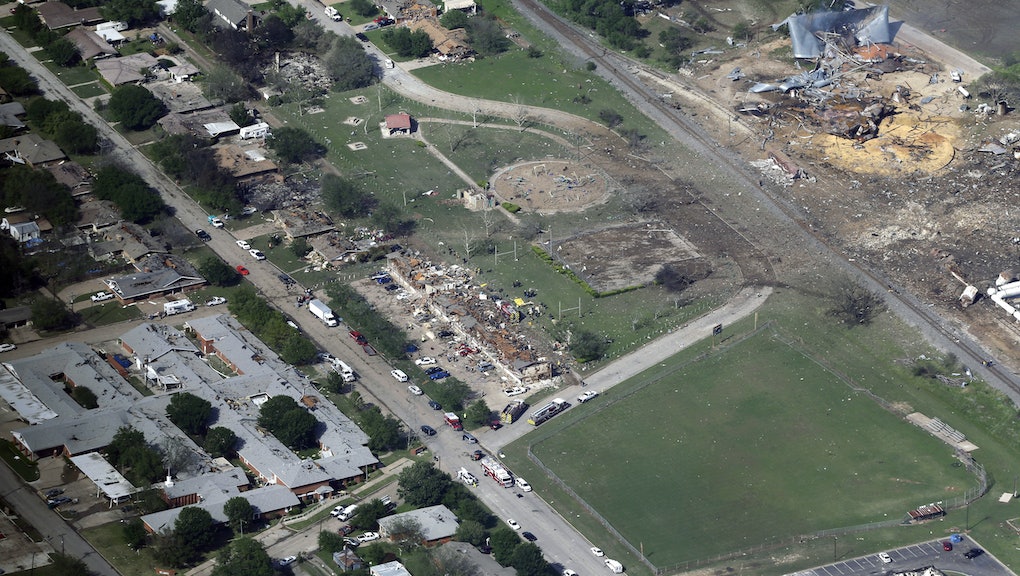 Are there hazardous chemicals stored near your home? Your workplace? Your child's school? If you're a Texan, your home state doesn't think you need to know the answer.

Last year, after the West Fertilizer Company ammonium nitrate explosion that killed 15 people, Texas' Department of State Health Services began releasing its database of chemicals and their locations, which companies are required to report. But that stopped this May when the department began refusing to release information about chemical storage.

Aren't these chemicals dangerous? They can be. Ammonium nitrate is explosive, and the new policy wasn't actually discovered until this month when a Dallas-area ABC affiliate asked for updated chemical reports following a fire at an ammonium nitrate storage facility in Athens, Texas. (The facility sat in the middle of town, requiring whole blocks to be evacuated.)

The department pointed to an attorney general's ruling on May 22 that actually invoked homeland security, arguing that the location and quantity of hazardous chemicals can't be made public because that information might "assist in the construction of an explosive weapon." That building in your town square might be full of explosive fertilizer, but it's better for you not to know.

Now the only way for Texans to know about what chemicals might be around them is to ask businesses directly — even though there are no mandatory penalties for businesses that refuse to release that information.

A nationwide problem: Texas' decision runs against an Obama administration initiative to give citizens greater access to chemical information. A federal task force formed after the West explosion found that "communities need to know where hazardous chemicals are used and stored, how to assess the risks associated with those chemicals, and how to ensure community preparedness for incidents that may occur." It's hard to do any of that when your state won't give out that information.

West isn't the only American chemical disaster in recent memory. January's chemical storage facility leak in West Virginia left 300,000 people without water for days, and leaks in the area have kept happening. A plant in Missouri was cited last week for a chemical spill that caused the failure of a wastewater treatment plant.

Despite these and other recent incidents, Texas continues to argue that homeland security necessitates keeping hazardous chemical locations under wraps. It's a scary thing to hear from your government — the less information you have, the safer you'll be.