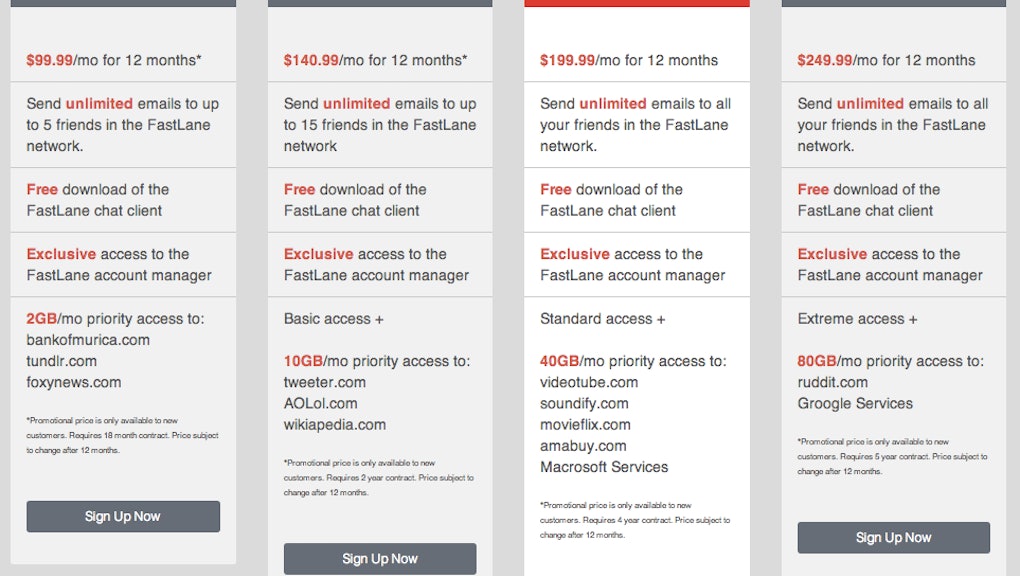 If you want an idea of what life might be like in a post-net neutrality world, just pay a visit to FastLane.

Here's a look at how bad things could become:

The satirical site tries to sell you web access with prices and restrictions right out of a Comcast executive's dream. It offers "priority access to dozens of websites" for plans starting at $99.99 a month ("send unlimited emails to up to 5 friends") to $249.99 a month. Each package comes with access to thinly veiled real web companies — you can get "tweeter.com" with the standard package but need to pay more for access to "movieflix.com" or "Groogle."

Explore the site and you'll find more fees and limitations. Gamers need to pay an extra $14.99 a month to play online, and FastLane has an exclusive deal with "Foxy News" that prohibits you from getting news from anywhere else.

If you try to buy anything, though, you'll get an idea of what's really behind FastLane — you're taken to an open letter from BitTorrent urging you to contact the FCC and Congress to tell them to protect net neutrality.

Making a point: FastLane may be funny, but it's definitely going for nervous laughter. It gives concrete (if over-the-top) examples of what the end of net neutrality might mean for consumers.

The fake company takes its name from one of the core fights of net neutrality: The idea that Internet service providers like Comcast and Verizon should be allowed to charge web companies for a "fast lane," or speedier access to their sites. The FCC is weighing a proposal that would allow for some types of fast lanes (but require FCC approval for any deals that gave some sites priority over others).

Supporters of the open web worry that cable companies giving some web companies preference over others will spell the end the ability to access any site or online service users want. If Verizon can charge Netflix for faster streaming, could it also slow down a competitor like Hulu? Could Comcast strike a deal so only its users can access Facebook? That's the kind of outcome FastLane is warning against.

The pushback: FastLane isn't the only thing out there calling attention to the issue. John Oliver crashed the FCC site when he told fans to submit comments on the proposal, while Netflix is making things more personal by calling out Verizon for slow streaming speeds. (Netflix has since stopped, though the FCC is investigating the situation.)

Cable companies, meanwhile, are throwing everything but the kitchen sink at consumers to tell them why ending net neutrality is better for all involved. Verizon lobbyists are even telling lawmakers that getting rid of the open web will help them provide faster access for blind, deaf and disabled Internet users, according to Mother Jones.

If they succeed? Well, it might be time to figure out which five friends you want in your email plan.