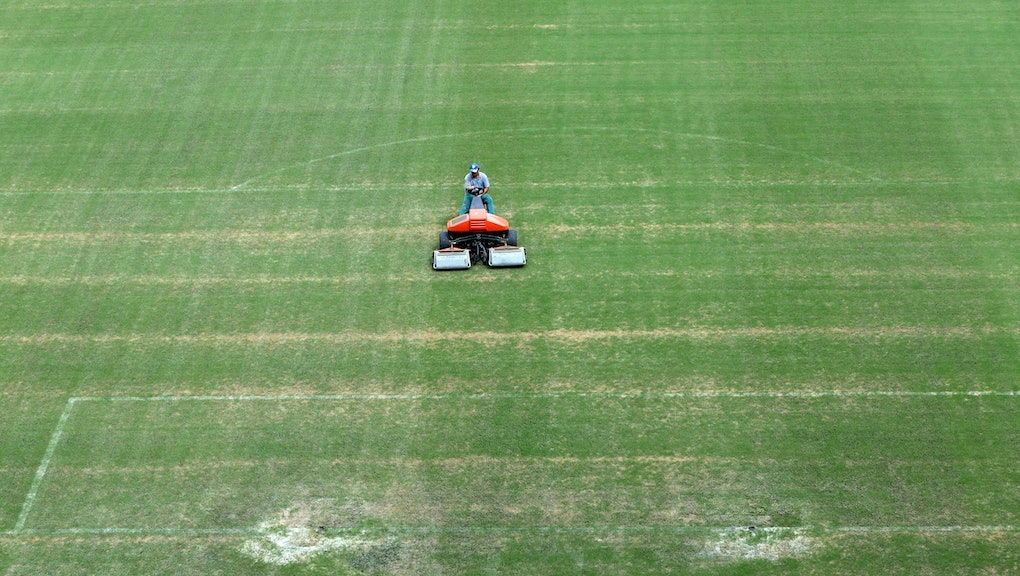 For all the challenges facing World Cup organizers — building massive stadiums, transporting teams around the country, managing half a million visitors — growing the grass seems like a minuscule concern. It's an issue that's taken center stage, though, as the World Cup heads to the Amazon.

Take a look at the field up there. Which are you more likely to believe: That it's the place two soccer world powers will meet to play in the world's biggest tournament, or that it's tucked in the middle of a local park with some funding issues? That's the field in Arena Amazonia in the city of Manaus, where Italy and England will play their opening match on Saturday evening.

The conditions are so bad that the international players union condemned the pitch Friday, saying in a statement, "The players deserve a quality playing surface. This isn't the case in Manaus. Nobody wants to see the players and the spectacle in general suffer."

What FIFA's done: Even the head groundskeeper knows things are rough. "Frankly, Manaus is in bad shape," Carlos Botella told the Associated Press. "We've started to implement an emergency plan to try to save the field and improve it as much as possible, but I don't think it'll be in good condition."

Some FIFA officials are denying that paint was used, but numerous local reporters begged to differ. It'll certainly look better than brown patches on viewers' TV screens, but it won't change the sandy conditions on the field.

Other problems, real and imagined: Groundskeepers blamed the weather for the pitch's problems. The intense humidity in Manaus (they are in rain forest territory) keeps the grass from growing in evenly and looking pretty. It's not only the grass that has troubles with humidity, though — England and Italy are preparing for a muggy day of football.

Arena Amazonia had other issues when it first opened. Fans who showed up to the stadium's first game complained about broken toilets, a leaky roof and tickets for seats that didn't even exist.

That's nothing compared to what some European fans are worried about. British tabloids have warned visitors of the Amazon's many wild residents — anacondas, giant beetles, blood-sucking catfish — and some visitors are in a tizzy about heading to the rain forest to watch a game. It leaves the Manaus mayor with the unenviable task of telling everyone he can that his city of two million people is not just a jungle outpost, saying, "There are not poisonous snakes and tarantulas roaming around the streets and falling from the trees."